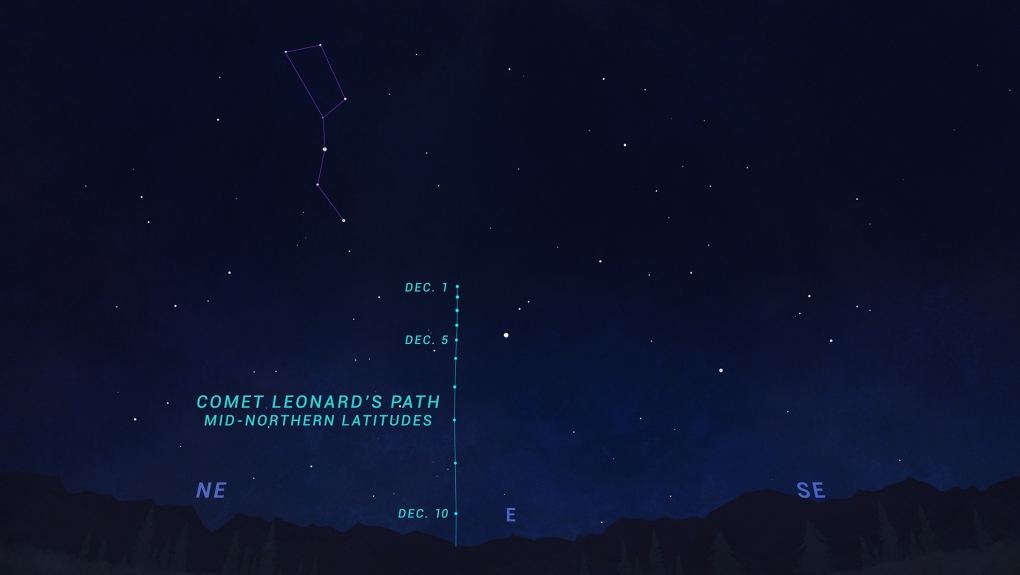 This sky chart from NASA shows the position of Comet Leonard in the east about two hours before sunrise between December 1 and 10. (JPL-Caltech/NASA/CNN)

There is a new comet in town, and December is your only chance to see it before it disappears forever. Astronomers say that Comet Leonard is our best and brightest to see in 2021.

The comet was first discovered in January by astronomer Greg Leonard. The celestial object has likely spent the last 35,000 years travelling toward the sun, according to Sky & Telescope, and once it makes a close pass of our star on January 3, we won't be seeing the comet again.

As the comet nears the sun, it brightens, which is why the weeks leading up to this event make the comet easier to see.

It's also an ultrafast comet, blazing through the inner solar system at 158,084 miles per hour (71 kilometres per second), but it will still appear like a slow-moving object due to its distance from Earth, according to EarthSky.

Comet Leonard will make it closest approach to Earth on December 12, coming within 21 million miles (34 million kilometres) of our planet. Then, it will sweep by Venus on December 18.

The comet will be visible in the skies of both the Northern and Southern hemispheres this month.

It's difficult to predict how well we may be able to see a comet, but you''ll probably need binoculars to spot this one, according to NASA. Keep an eye out for an object that looks like a fuzzy star.

"In the first couple of weeks of December, Comet Leonard can be found in the east before sunrise, passing between Arcturus and the handle of the Big Dipper," the agency shared in a post.

"It approaches the horizon right around the time of its closest approach to Earth, meaning it'll likely be brighter but more challenging to observe. It then switches over to being an evening object after around Dec. 14, for just a little while after the Sun sets -- as it begins its long haul outward from the Sun again, progressively fading in brightness."

As comets near the sun, these giant iceballs begin to shed some of their material, which forms a halo, or coma, around the object.

Dust and gas stream behind comets to form their extremely long tails. Most comets originate from the icy edge of our solar system and only become visible to us as they travel through the inner solar system, where Earth is located, during their long orbits of the sun.

It's possible that Comet Leonard will be visible to skywatchers looking with the naked eye, but if you're worried about missing this once-in-a-lifetime viewing experience, The Virtual Telescope Project will be sharing a livestream from its observatory in Rome.