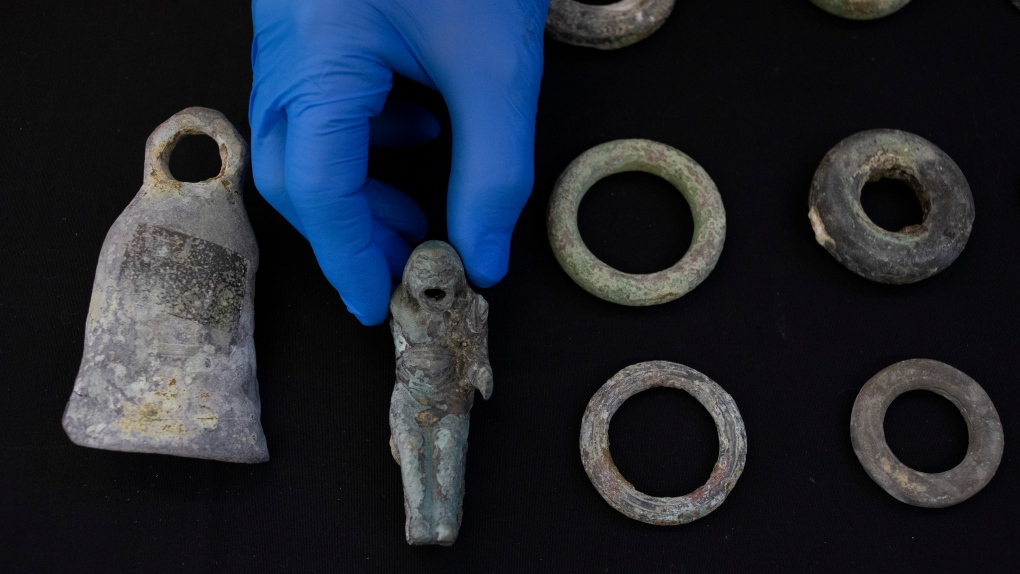 Jacob Sharvit, director of the Marine Archaeology Unit of the Israel Antiquities Authority holds the finds made near the ancient city of Caesarea , dated to the Roman and Mamluk periods, around 1,700 and 600 years ago, on display in Jerusalem, Wednesday, Dec. 22, 2021. (AP Photo/Ariel Schalit)
JERUSALEM -

The Israel Antiquities Authority announced Wednesday the discovery of remnants of two shipwrecks off the Mediterranean coast, replete with a sunken trove of hundreds Roman and medieval silver coins.

The finds made near the ancient city of Caesarea were dated to the Roman and Mamluk periods, around 1,700 and 600 years ago, archeologists said.

They include hundreds of Roman silver and bronze coins dating to the mid-third century, as well as more than 500 silver coins from the Middle Ages found amid the sediment.

They were found during an underwater survey conducted by the IAA's Marine Archaeology Unit in the past two months, said Jacob Sharvit, head of the unit.

Among the other artifacts recovered from the site near the ancient city of Caesarea were figurines, bells, ceramics, and metal artifacts that once belonged to the ships, such as nails and a shattered iron anchor.

The IAA made its announcement just days ahead of Christmas, and underscored the discovery of a Roman gold ring, its green gemstone carved with the figure of a shepherd carrying a sheep on his shoulders.

"On the gemstone is engraved an image of the `Good Shepherd,' which is really one of the earliest symbols of Christianity," he said.

Sharvit said that the Roman ship is believed to have originally hailed from Italy, based on the style of some of the artifacts. He said it remained unclear whether any remnants of the wooden ships remained intact beneath the sands.

Five people were taken to hospital and two suspects have been arrested after an attempted bank robbery and shootout with police in Saanich, B.C.

John Horgan announced Tuesday afternoon that he will step down as premier of British Columbia.