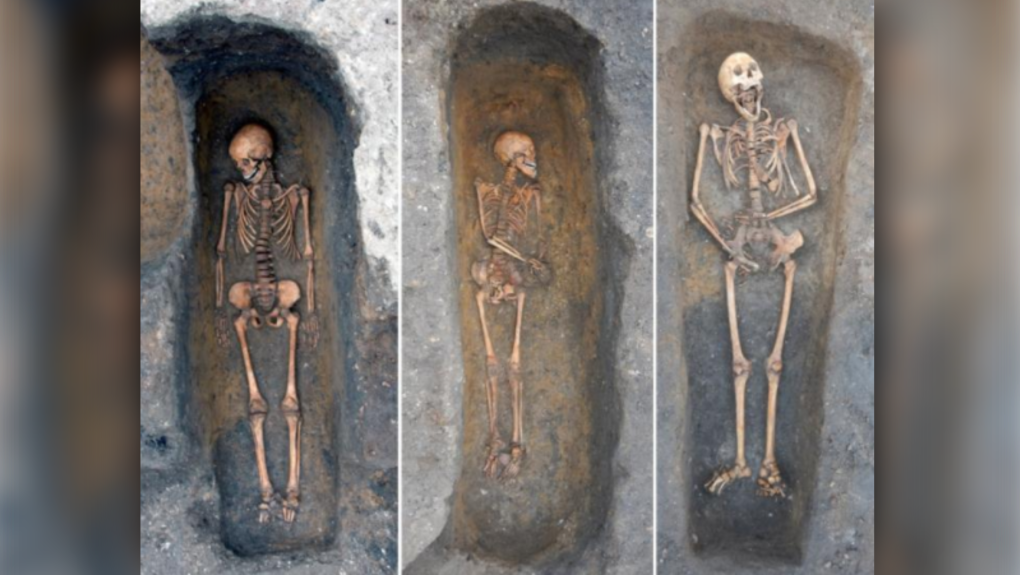 Individuals buried in the chapter house of the Augustinian friary, Cambridge, who died of plague. (Cambridge Archaeological Unit)

TORONTO -- Researchers from the University of Cambridge in the U.K. have discovered the first evidence that European victims of the Black Death were buried with care in individual graves and not only in mass gravesites.

The Black Death, caused by the Bubonic plague pandemic, devastated Europe in the mid-14th century and killed between 40 to 60 per cent of the population. The plague continued to strike over several centuries.

Bubonic plague symptoms include fever, fatigue, shivering, vomiting, pain in the limbs and swollen lymph nodes, usually in the groin or armpits.

The plague killed so rapidly that it left no visible traces on the skeleton, so archaeologists have previously been unable to identify plague victims unless they were buried in mass graves, according to a release.

Researchers from the “After the Plague” project from the University of Cambridge, have been studying the DNA from teeth of individuals who died at the time and found the presence of Yersinia Pestis, the pathogen that causes plague, in the skeletal remains of people buried in individual graves at a parish cemetery in Cambridge.

"These individual burials show that even during plague outbreaks individual people were being buried with considerable care and attention,” said lead study author Craig Cessford of the University of Cambridge in the release. "This contrasts with the apocalyptic language used to describe the abandonment of this church in 1365 when it was reported that the church was partly ruinous and 'the bones of dead bodies are exposed to beasts'."

Researchers also found that some plague victims in Cambridge received mass burial, finding some in a large trench in the churchyard of St. Bene’t’s.

"Our work demonstrates that it is now possible to identify individuals who died from plague and received individual burials,” Cressford said. “This greatly improves our understanding of the plague and shows that even in incredibly traumatic times during past pandemics people tried very hard to bury the deceased with as much care as possible."