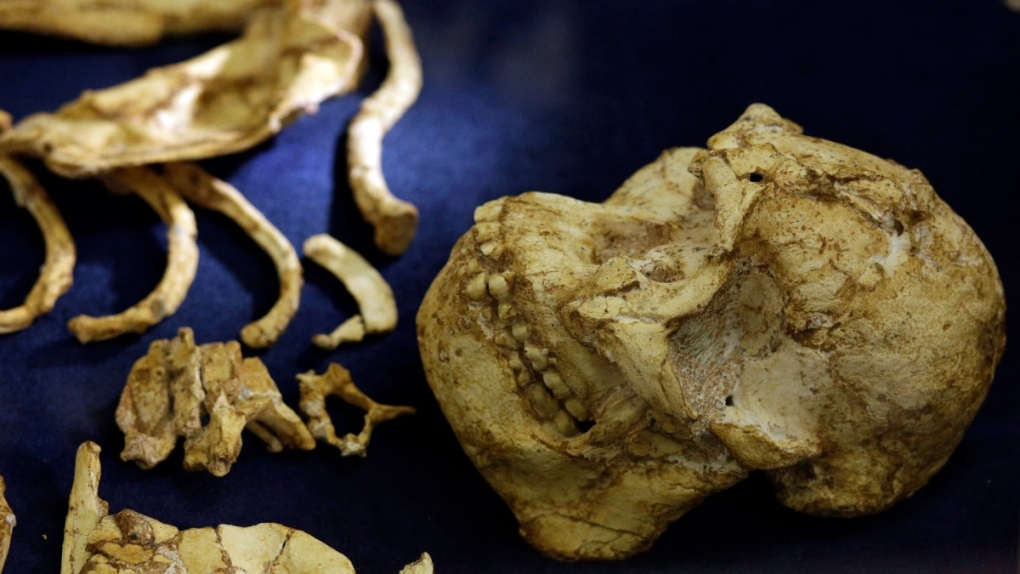 The Australopithecus fossil 'Little Foot' is displayed at the University of the Witwatersrand in Johannesburg, South Africa, on Dec. 6, 2017. (Themba Hadebe / AP)

Fossils of early human ancestors from a South African cave are 3.4 million to 3.6 million years old -- making them a million years older than previously suspected and shaking up the way researchers understand human origins and evolution.

This new date makes the Sterkfontein Cave fossils older than the famed Lucy fossil (also known as Dinkinesh) from Ethiopia. Found in 1979, Lucy represented the species Australopithecus afarensis and lived 3.2 million years ago.

The freshly dated fossils also belong to the genus Australopithecus, an ancient hominin that was initially thought to live 2 million to 2.6 million years ago. Researchers used a new technique to date the sediments of the Sterkfontein Caves, which are part of the Cradle of Humankind UNESCO World Heritage Site, about 30 miles (50 kilometres) northwest of Johannesburg.

The caves included in this network have revealed details about human and environmental evolution that span about 4 million years.

The site is home to a treasure trove of fossils that help tell the story of human evolution -- a story that seems to shift with each discovery.

A new study detailing the findings was published Monday in the Proceedings of the National Academy of Sciences.

The importance of the Sterkfontein Caves came to light in 1936, when the discovery of the first adult Australopithecus fossil was made by paleontologist Dr. Robert Broom.

Hundreds of Australopithecus fossils have been found there since, including the famous Little Foot, who lived 3.67 million years ago. Today, she represents the most complete Australopithecus skeleton and is helping researchers to learn more about our chimpanzee-like ancestors.

"Sterkfontein has more Australopithecus fossils than anywhere else in the world," said lead study author Darryl Granger, professor of Earth, atmospheric and planetary sciences in Purdue University's College of Science, in a statement.

"But it's hard to get a good date on them. People have looked at the animal fossils found near them and compared the ages of cave features like flowstones and gotten a range of different dates. What our data does is resolve these controversies. It shows that these fossils are old -- much older than we originally thought."

A NEW LOOK AT ANCIENT ANCESTORS

The researchers determined that all of the cave sediments including Australopithecus fossils date from 3.4 million to 3.6 million years old, which places them toward the beginning of the Australopithecus era, rather than the end of it. They now predate other hominins at nearby sites by over a million years.

Many of Sterkfontein fossils were found in Member 4, the richest deposit of Australopithecus fossils found anywhere in the world. Previous research had suggested the deposit could be as young as 2 million years ago -- younger than when the genus Homo, to which we (Homo sapiens) belong, first appeared about 3 million years ago.

Those dates suggested that Australopithecines overlapped with members of the Homo genus, as well as a large-toothed hominin called Paranthropus. Based on that idea, researchers up until now have accepted that South African Australopiths were descended from East African species, like Lucy and other members of Australopithecus afarensis.

Reassessing the age of the Sterkfontein Australopiths has important implications for how South Africa played a part in the diversification and expansion of our early human ancestors, said study coauthor Dominic Stratford, director of research at the caves and a professor at University of the Witwatersrand in Johannesburg.

LOOKING INTO THE PAST

To date cave sediments, Granger applied a method he first developed in the mid '90s that's now used by many researchers in the field.

Granger works with cosmogenic nuclides, "very rare radioactive particles that are produced inside mineral grains by cosmic rays coming from space," he said. Aluminum-26 and beryllium-10 are two examples of cosmogenic nuclides, both found in the mineral quartz. Aluminum-26 forms when a rock is exposed to cosmic rays while sitting on the Earth's surface. But that can't happen once it's inside a cave.

"Their radioactive decay dates when the rocks were buried in the cave when they fell in the entrance together with the fossils," Granger said.

Previously, he used his method to date the Little Foot fossil. But the age of the other Australopith fossils within the Sterkfontein Caves has been debated, mainly because the deep, complex cave system has a long history of occupation by hominins who lived in the area at the time.

East Africa is another location rich with early hominin fossils, and many have been found in the Great Rift Valley, where volcanoes have created layers of ash that are easier to date.

The same isn't true for South Africa's caves, where researchers must rely on using animal fossils to help determine the age of other bones they are close to, or calcite flowstone. When water flows on cave walls or floors, it can deposit sheetlike layers of calcite or other carbonate minerals.

Dating cave sediments is tricky -- and it becomes even more difficult as rocks and bones shift and tumble from different layers in the cave. And younger flowstone can sometimes be found mixed in with old sediment.

Rather than the straightforward peeling back of the layers, it's more like sorting through a mixture.

Granger made a breakthrough in 2014 while working in the Purdue Rare Isotope Measurement Laboratory, and the researchers discovered they could measure small quantities of aluminum-26 very accurately -- opening the doors to sites that were previously much harder to date, he said.

Granger and his team studied the breccia, the concrete-like substance where the fossils are embedded, and used his method to determine the new dates of the fossils. The researchers also made maps of cave deposits and showed how some of them became mixed together during excavations that took place during the 1930s and 1940s.

"Part of the misconception about its age came from mixing of fossils from different layers during early excavations," Granger said. "Using this method, we can more accurately place ancient humans and their relatives in the correct time periods, in Africa, and elsewhere across the world."

Donald Trump 'took the Fifth.' What does it actually mean?

Former U.S. President Donald Trump showed up Wednesday for questioning under oath in New York's civil investigation into his business practices. But he quickly made clear he wouldn't be answering.

The Meade County Sheriff’s Office in South Dakota said it has arrested the man wanted in connection with an Amber Alert in Saskatchewan.