OTTAWA -- The Green Party endured some major setbacks this federal election, but among the blunders was one major victory: gaining its first seat in Ontario.

Rookie MP Mike Morrice is to credit for that.

Morrice, the representative for Kitchener Centre, will be one of only two Green MPs in the House of Commons when Parliament returns. Former party leader Elizabeth May holds the second seat.

Morrice has been a dedicated climate activist for 15 years.

In 2008, he founded Sustainable Waterloo Region, a non-profit organization that helps local businesses become more environmentally and economically sustainable. As it gained national attention, he founded Green Economy Canada, to help companies across the country reduce their carbon impact.

He decided to enter into the federal political ring in the 2019 election, but lost out to former Liberal MP Raj Saini.

Asked why, as a successful environmental entrepreneur, he wanted to pivot into politics, Morrice provided two answers.

He said it’s become abundantly clear that chipping away at the climate crisis requires strong leadership at the highest levels of government.

“If we want to actually follow the science on the climate crisis, if we want to be honest about what’s needed to address some of the biggest systemic challenges we face, we’re going to need to change public policy,” he said in an interview with CTVNews.ca.

“We need to set the rules of the game in a way that incentives the kind of behaviour that we know scientists, Indigenous leaders, and young people… have been calling out for.”

His second reasoning is more “existential.”

“What’s the point of anything else if our nieces and nephews and kids and grandkids don’t have a safe climate future. That sense of calling kind of grew,” he said.

Morrice is one of 50 rookie MPs elected in the 2021 federal election. CTVNews.ca is profiling five—one from each party with a seat in the Commons— in the lead up to the first sitting day of the 44th Parliament.

Morrice said he learned from his first campaign experience that a candidate gains more from listening to, as opposed to talking at, constituents. 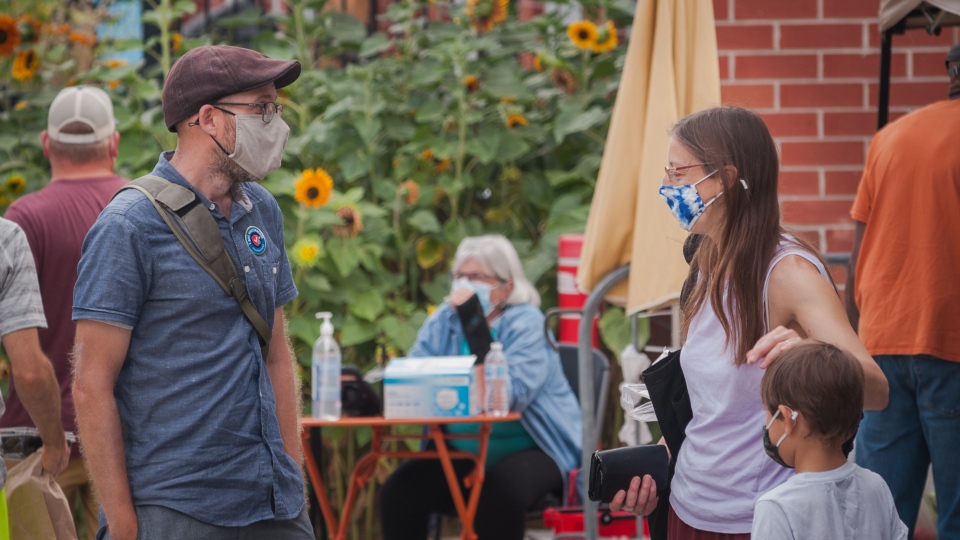 And what he heard this fall, were more of the same concerns he heard in 2019: less affordable housing, less access to vital health-care services, and longer wait times for long-term care.

“So many of these priorities, yes, I heard about them in 2019, but the sense of grieving and the depth of the challenge for so many in my community seems to have only been made worse,” he said.

He said he also heard from voters who’ve grown tired of hyper-partisan political games in Ottawa.

“So many people in my community don’t care whose name is on the bill, it doesn’t matter which party has put it forward, [they] just want to ensure that we make progress on ensuring universal pharmacare gets passed through, that we address gaps in health care,” he said.

Morrice’s objective is to venture to Ottawa open-minded, and ready to collaborate with politicians of all stripes, though he acknowledged the strategy could sound naïve.

“I recognize there are coercive forces at play in all of this,” he said. “I’m going to be respectful, even more so if we don’t agree, and that’s as much true at someone’s doorstep as I think it should be true in the House of Commons.”

Ontario Green Party Leader Mike Schreiner, who’s known Morrice for over a decade, says he’s confident he’ll be able to bring a “new approach” to politics – something the Guelph MPP is attempting to do at the provincial level.

“I’ve been a very strong critic of the Ford government just ripping up Ontario’s climate action plans, cancelling renewable energy contracts… but when a member of the Conservative caucus approached me about co-sponsoring a bill to make life better for electric vehicle drivers, I said yes, let’s work on this together,” Schreiner said in an interview with CTVNews.ca.

“I would encourage MPs from all parties to take the opportunity to really get to know Mike and work with Mike, because he’s there for the right reasons.”

The Green Party faced its fair share of infighting leading up to the 2021 campaign.

There were vocal calls from within the party to oust leader Annamie Paul, after an internal dispute with Fredericton MP Jenica Atwin, who defected to the Liberals in June.

Morrice, however, said Paul has been “hugely” supportive of his political journey.

“Annamie was here in Kitchener with us in the days before the election. She was with us at the nomination party back in the spring,” he said. “I’ve made clear my support for her as leader while also respecting her decision to begin the process of resigning.”

Asked whether he’d have a go at leadership, Morrice said he’s focused on his job ahead as an MP.

“We’re staffing up. We’ve got a lot to follow through on in terms of the commitments that myself and our team have made…and so my focus is on that work, on being a strong MP, on learning to do that job well,” he said.

He’s promised his Kitchener Centre constituents that he’d continue to listen and be respectful of their needs while in Ottawa.

“That to me is the bedrock of our democracy. I see this role as being a voice for my neighbours in Ottawa,” he said, adding that action on housing affordability, access to mental health services, and fighting climate change will be among his top priorities.

“To have somebody with his connection to community, the way he connects climate action to improving people’s lives and improving our economy – to have that type of person, their voice in Ottawa, I think it’s good for Canada and Kitchener Centre as well,” he said.

Beyond the halls of Parliament, Morrice says he’s looking forward to exploring some new bike trails in and around Ottawa.

“There are some great trails so I’m hoping to have a chance to be on my bike again…I think it’s so important that we have elected officials who are doing the work, but also taking care of themselves,” he said.