Similar, repeated messaging from the Liberal government on the pandemic could be part of the reason the three leading federal parties are nearly tied in current ballot support, according to Nanos Research's Nik Nanos.

Nanos discussed the ballot tracking numbers on the latest episode of Trend Line.

Ballot support for the Conservatives and Liberals is down 5.2 per cent and 4.4 per cent respectively since the federal election in 2021. When asked by Nanos Research what issues are at the top of mind, 33.4 per cent of Canadians responded with the pandemic.

While there is a lot of media attention on Conservative infighting, Nanos said the Liberals should be concerned about looking like "a tired government."

"The Liberals, basically, are proposing more of the same... more boosters, you know, more PPE, more support for Canadians," said Nanos. "I think Canadians are getting a little fatigued."

This could lead to a situation where "people just get fed up with the pandemic and want to punish someone," said Nanos, who added that the Liberals could be at the "front of the line" of any potential backlash. 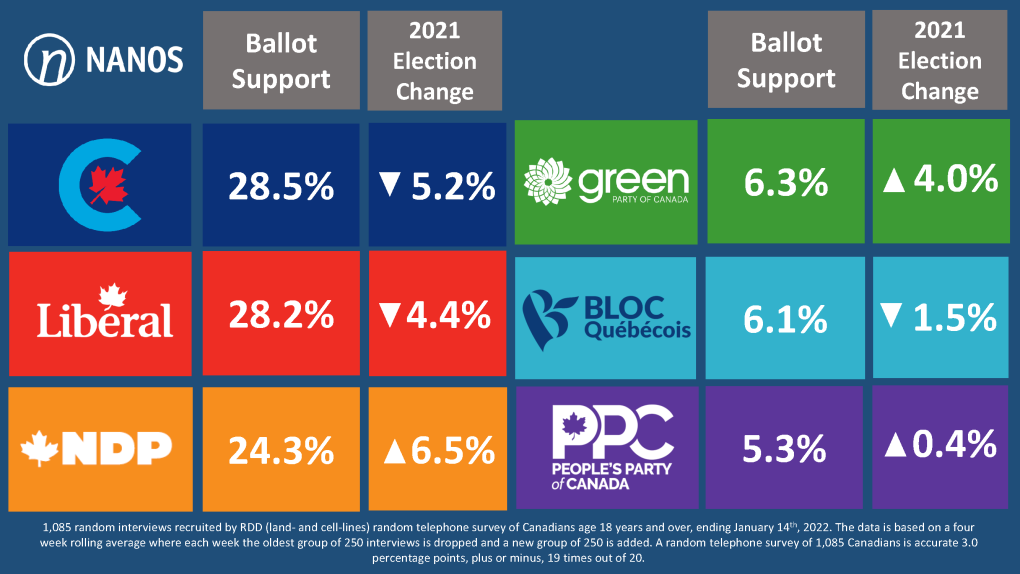 While Que. Premier Francois Legault's pledge to tax unvaccinated people drew some condemnation, it can also be seen as an effort from the Legault government to try something new to fight the pandemic, said Nanos.

"I see Legault's move, even though he has a massive advantage in the polls, as a way for him to show that he's doing something else, something new to continue to fight the pandemic," Nanos said.

To hear more analysis listen or watch the show attached to this article.

Trend Line is back for a new season and publishes every two weeks. You can watch or listen on CTVNews.ca, the CTV News app, YouTube or wherever you get your podcasts.

From top politicians to influential oligarchs and media figures, Canada has slapped sanctions on numerous high-profile Russians, including President Vladimir Putin, as he continues his unjustified and deadly attack on Ukraine. CTVNews.ca has dug through the names to figure out who is who on Canada's growing sanctions list.

A driver who struck and killed a woman and her three young daughters in Brampton, Ont., nearly two years ago is being sentenced to 17 years behind bars.

The isolated state is one of only two countries yet to begin a vaccination campaign and, until last week, had insisted it was COVID-19-free.