Prime Minister Justin Trudeau says the government will end the use of the Emergencies Act after it was invoked just over a week ago in response to the ongoing trucker convoy blockades and protests.

“Today, after careful consideration, we're ready to confirm that the situation is no longer an emergency. Therefore, the federal government will be ending the use of the Emergencies Act,” the prime minister said.

Trudeau added while the “immediate emergency situation is over” the issue itself “won’t go away.”

“We need to constantly work to defend and improve our democracy at home and around the world,” he said, speaking to reporters.

The House of Commons passed a motion on Monday confirming the time-limited emergency powers, which included sweeping financial tools to cut the convoy’s funding.

The Act was set to expire after 30 days had it not been revoked.

Lametti said any violations of the law that occurred during the 10 days the measures were in place will continue to be followed up on through the justice system.

With regards to the financial tools employed, the RCMP has already begun to unfreeze accounts attached to those affiliated with the convoy.

In a large-scale police operation over last weekend, police squads from across the country joined forces to alleviate the truck and protester congestion in downtown Ottawa that had blockaded the city for more than three weeks.

Many vehicles associated with the Freedom Convoy have since regrouped on private properties in communities outside of the city. 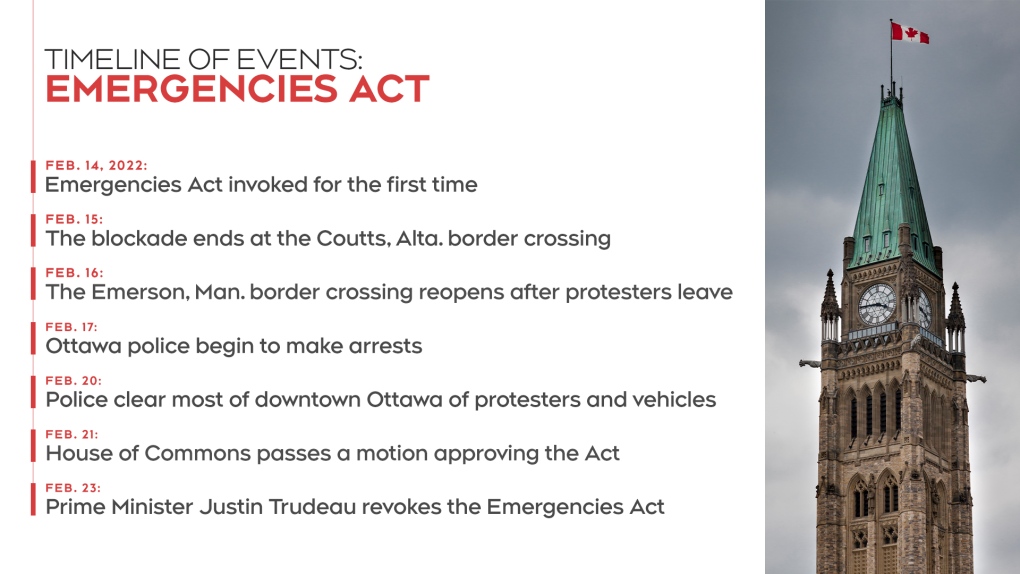 Asked about the threat of these new encampments, the prime minister said law enforcement has the tools to handle the situation.

“We got a high level of confidence that the existing tools that police forces have across the country will be sufficient to deal with further disruptions,” he said.

Within 60 days of triggering the Act, an inquiry must be struck looking into the invocation of it. A report recapping the study would then be presented to Parliament within 360 days.

Trudeau said the joint committee of Parliamentarians will look at “how we got there, and why it was required.” He said it may also look at policing and the influence of foreign funding.

He added that party membership on the committee will be determined by establishing the right level of “transparency and legitimacy.”

“This was a power grab, a government overreach, and again I’m just shocked to see that [Trudeau] is actually admitting [that] Conservatives, what we’ve been saying all along is correct. That the existing laws on the books are more than enough to keep the peace,” Dancho told CTV News Channel’s Power Play.

Meanwhile, NDP House Leader Peter Julian said the party approves of the lifting of the Act.

“The moment that it is no longer needed, is the time to revoke it, and we believe that that was the appropriate move that was made today,” he said.

The prime minister said there are several takeaways from the last 10 days, including reflections on the jurisdiction of local policing, the mobilization of movements through social media, and the spread of misinformation and disinformation online.

Trudeau also refuted the assertion that he’s set a low bar for future use of the Act.

“There will continue to be threats to Canada, to our democracy, to democracies around the world and we cannot shy away from using tools that are necessary to maintain the safety and security of citizens,” he said.