TORONTO -- On the eve of the 44th Canadian federal election, the race between the Liberals and Conservatives remains very close, while Liberal Leader Justin Trudeau maintains his slight advantage over Conservative Leader Erin O’Toole when it comes to preferred prime minister.

In a one-day sample of 800 Canadians performed by Nanos Research for CTV News and The Globe and Mail, the Liberals are at 32.4 per cent, while the Conservatives trail close behind at 31.2 per cent.

The NDP remain in third place at 17.5 per cent, while the Bloc Quebecois sits at 7.5 per cent.

The People’s Party of Canada (PPC) is in fifth place at 6.6 per cent and the Green Party is in sixth place, with 4.5 per cent support.

Of those surveyed, 8.2 per cent are still undecided.

“One of the potential outcomes […] is something very similar to 2019,” Nik Nanos, founder and chief data scientist at Nanos Research, said on CTV’s Trend Line podcast Monday morning.

The 2019 election also saw a dead heat between the Liberals and Conservatives in the national ballot. But the Liberals, because of vote efficiency, were able to win a minority government because they won more seats in the House Commons.

Nanos added: “We don’t know what the voter turnout is going to be like.”

Nanos said on CTV’s Question Period Sunday, to watch for “very exciting and interesting regional races” in Atlantic Canada, where there are many seats too close to call with Conservative candidates posing a threat to Liberals. There are just 32 seats in Atlantic Canada, but with such a close election, a few seats could prove to be decisive.

In vote-rich Quebec, where there are 72 seats, Nanos said there are tight races circling the island of Montreal between the Bloc Quebecois and the Liberals, “that could have a significant impact on how a minority government looks,” he said on CTV News.

In Ontario, meanwhile, Nanos said O’Toole has his eyes firmly set on the vote-rich 905 battleground, with its approximately 3.4 million population and over 30 ridings up for grabs. “If (O’Toole) is going to do well I this election, it’s got to start at the 905,” said Nanos.

And if we jump over to British Columbia, there are three-way, nail-biter races just like in 2019.

“Who knows what will happen (in B.C.), but the NDP are doing well,” said Nanos.

There was a slight dip in NDP support in the final poll, something Nanos said could be indicative of voters shifting strategies at the last moment.

“In my opinion, people don’t strategically vote until the end,” he said.

Nanos said Monday that one of the surprises of the election could be the PPC, which failed to win a single seat in 2019.

“In the last election, they didn’t do well,” he said. “If they do well in Ontario, that might not be good news for Erin O’Toole.”

Meanwhile, Liberal Leader Justin Trudeau has held on to the lead for preferred prime minister, with 31.1 per cent of respondents choosing him first when asked to rank their top two preferences for PM. Conservative Leader Erin O’Toole had 27.5 per cent support while NDP Leader Jagmeet Singh remained in third, with 19.8 per cent.

Nano Research conducted all of the interviews for this survey on Sunday and released them Sunday night at 10:00 pm ET.

A national dual-frame (land+cell) random telephone survey is conducted nightly by Nanos Research throughout the campaign using live agents. Each evening a new group of 400 eligible voters are interviewed (800 on September 19th). The daily tracking figures are based on a three-day rolling sample comprised of 1,600 interviews. To update the tracking a new day of interviewing is added and the oldest day dropped. The margin of error for a survey of 1,600 respondents is ±2.4 percentage points, 19 times out of 20.

September 19th tracking is a standalone one-day random sample of 800 Canadians.The margin error is ±3.6per centage points, 19 times out of 20. 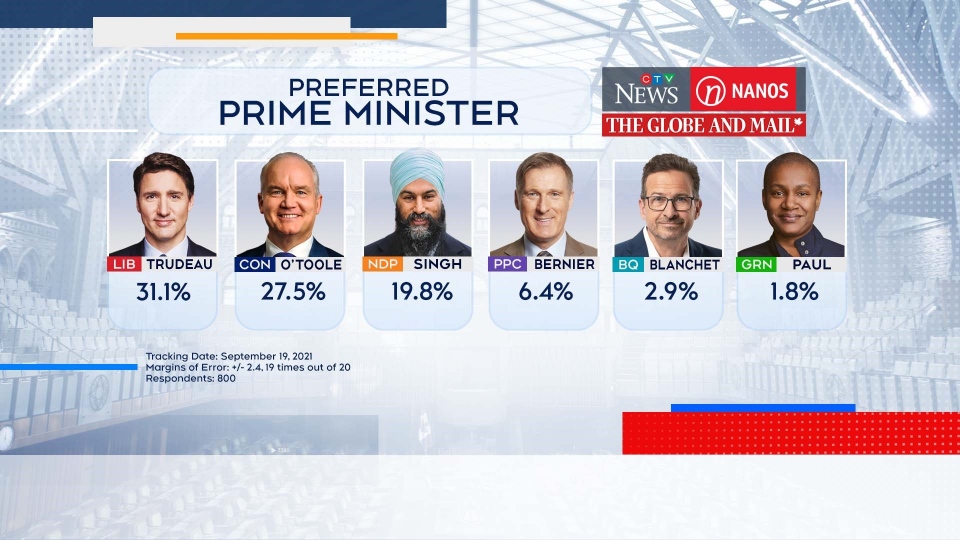