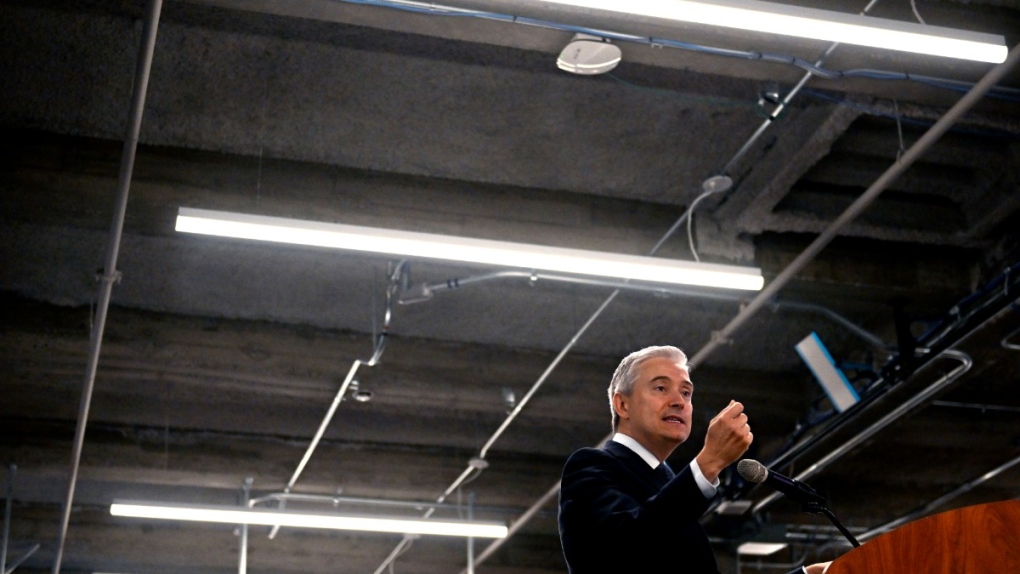 Federal Innovation Minister Francois-Philippe Champagne is selling Canada's battery-supply chain prowess in Asia again this week, but this time he has a new boast in his back pocket.

Research firm BloombergNEF pushed Canada's position in its annual global ranking of battery-producing countries ahead of everyone else but China.

"That's something I'm going to use very much on my trip in Asia, to say we have what Asia needs," Champagne said.

The survey ranks 30 countries with a significant presence in the industry, be it in the mining of raw materials to the production of batteries and their component parts.

The first version in 2020 ranked Canada fourth, and in 2021 fifth, after mining outputs fell and regulatory hurdles mounted.

But Canada has announced more than $15 billion in investments over the past 10 months in areas ranging from critical mineral mining and processing to battery component manufacturing, electric vehicle production and the country's first gigafactory.

That helped Canada climb past Sweden, Germany and the United States, even with the latter's massive investments under the Inflation Reduction Act.

"I think this is a home run for Canada in the sense that the vision was really to build an ecosystem from mine to recycling, and now it's taking shape and what we're doing now is to optimize it," Champagne said.

His trips this week to Japan and South Korea, along with next week's planned stops in Germany, are in that vein. He has already met with key industry players in those countries multiple times both in Canada and abroad, but he says he's focused on consolidating those relationships and continuing to make Canada's case as a presence in the field.

The battery-supply chain has many links, starting with mining of the raw materials like lithium, nickel, aluminum and copper used to make batteries. Those minerals and metals are then refined so they can be used to make the components of battery cells -- namely cathodes, anodes and electrolytes.

The components are then pulled together to make battery cells -- which resemble the same alkaline non-rechargeable batteries most consumers are familiar with -- and then gigafactories package those cells together in large numbers to make battery packs that run everything from laptops and cellphones to electric cars.

The BloombergNEF report looks at all of those supply chain parts, as well as demand for the end product and environmental stewardship.

Canada gets among the highest marks on keeping the supply chain green, thanks in part to a generous supply of renewable energy but also to environmental regulations on mining. The BloombergNEF survey also credited Canada for its efforts to boost mining activity.

Canada is still lagging on battery cell and component manufacturing and domestic demand for electric vehicles, but there have been many announcements in the last year improving both.

Vic Fedeli, Ontario's minister of economic development, told The Canadian Press following a trip to meet with industry stakeholders in Germany last month that one of Canada's biggest selling points is its access to the raw materials needed to make batteries.

"They talk about our critical minerals and that's when we know we've got their genuine interest because there's such a finite amount of active critical mineral producers outside of China," he said. "We really have a captive audience."

While Canada is not the biggest producer of any of the main metals and minerals needed for batteries, it is one of the few places in the world capable of producing all of them.

Canada and its allies are also trying to prevent China from using its dominance in the battery supply chain industry to throw its weight around in global politics. They have likened it to Europe being too reliant on Russia for gas.

Having started investing in the sphere more than a decade ago, China is now home to three-quarters of all battery cell manufacturing capacity and 90 per cent of anode and electrolyte production.

Its raw mineral production isn't always the highest, but it has invested heavily in mines in other countries, including in Canada, to bring those products to China for refining and use in manufacturing. The U.S. Geological Survey said China produced about four per cent of the world's nickel last year but refined more than two-thirds of it.

Canada is starting to take steps to limit China's influence within the domestic supply chain. Earlier this month, Champagne said Canada will limit the involvement of foreign-owned state companies in the critical mineral sector, and a week later ordered three Chinese companies to sell their interests in small Canadian firms.

But there are many more, including the only currently operating lithium mine in Canada. The Tanco mine in Manitoba is owned by China-based Sinomine Resource Group.

Champagne wouldn't say what other orders will come, but did hint at additional announcements.

"I'll be like a hawk looking at these transactions to make sure that we protect the national and economic security of Canadians," he said.

This report by The Canadian Press was first published Nov. 21, 2022.