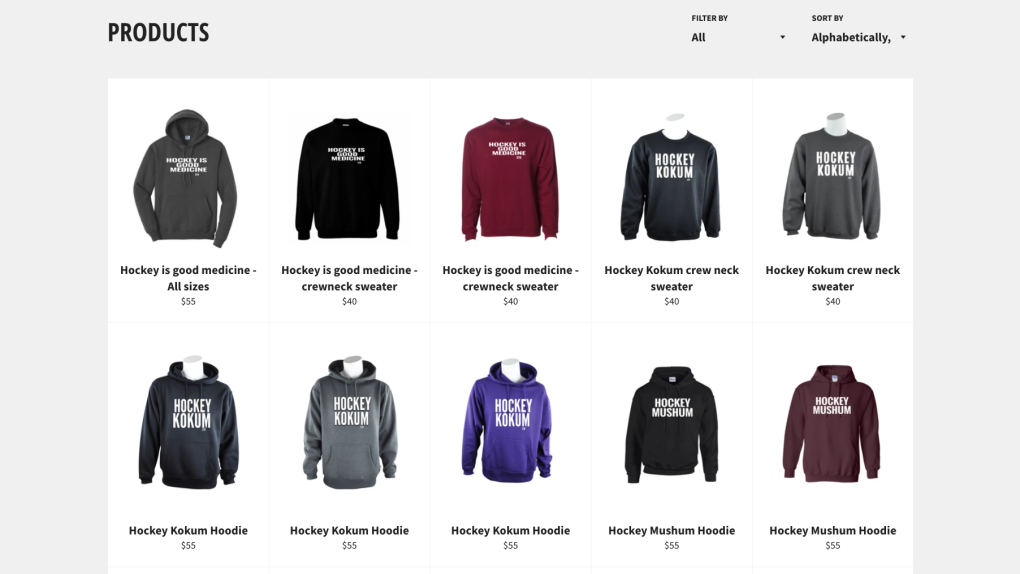 TORONTO -- An Indigenous-owned clothing line is celebrating Indigenous hockey culture while encouraging and supporting young Indigenous athletes in the sport.

"Smudge the Blades" sells a wide variety of sportswear and hockey gear with clever designs that bring Indigenous culture and humour to the rink. The designs include slogans such as "Hockey is good medicine," "First Nations hockey sensation" and "Kitâskwêw, pihtakwatâw," which is Cree for "He shoots, he scores."

"Before I launched Smudge the Blades, I had this idea for about two years prior. I just kind of made some funny shirts that I thought would maybe make people laugh. I kept them on my computer then one day I just decided to make a website," Smudge the Blades founder Harlan Kingfisher told CTV News.

A father of four from Sturgeon Lake First Nation in Saskatchewan, Kingfisher named his company in honour of his late grandfather, who would perform smudging ceremonies to bring healing to his community. Smudging also became an important pre-game ritual for Kingfisher, after his grandfather made the suggestion.

"One day, I wasn't doing good in the playoffs. He told me, 'Why don't you smudge your hockey gear, smudge your stick?'" Kingfisher explained.

Kingfisher has had many fond memories of growing up and playing hockey -- but he also knows what it's like to experience racism on the ice. He recalls one instance while he was a junior hockey player playing for an Indigenous-owned team he during road game in a small town in Manitoba.

"I'd never seen anything like it. The whole entire crowd just cheering, yelling at you guys, spitting on you, throwing garbage. They had nets above us that they had to put up so garbage wouldn't hit us. You hear the comments, 'Drunk Indians, get off our ice,'" said Kingfisher.

Today, Kingfisher uses his platform on social media to call out and raise awareness of racism that continues to be pervasive in hockey.

"I call out people. I call out organizations and since I've been doing that, people have messaged me and is letting me know their stories," he said.

"It didn't make me feel too well. I just kind of kept it to myself and I just texted my mom what happened," Keagan said.

"It created some exposure of how racism is really taking its effect in hockey," Brightnose said.

Hockey can also be an expensive sport, as hockey gear and fees can cost thousands of dollars. A portion of Smudge the Blades' sales have been going towards supporting Indigenous families who otherwise can't afford to enroll their kids in hockey programs.

Kingfisher says he just recently reached out to a mother who was about to tell their kids they couldn't play hockey this season because of the high cost in fees.

"I covered their hockey fees and got them to play this year," said Kingfisher. "I really want to pay it forward to all of the indigenous youth that need help."

"Hockey in Canada is everyone's game and as Indigenous people, we created the Mic-Mac hockey stick. It's in our blood, and Indigenous hockey is so huge," said Kingfisher.