TORONTO -- As cities across Canada search for explanations and areas of blame for the spread of COVID-19, one in particular faces the most pressing questions.

Montreal, the epicentre of the novel coronavirus in Canada, has seen more than 22,000 confirmed cases and about 2,300 deaths since the first presumptive case at the end of February. That’s more than one-third of all deaths in the country. 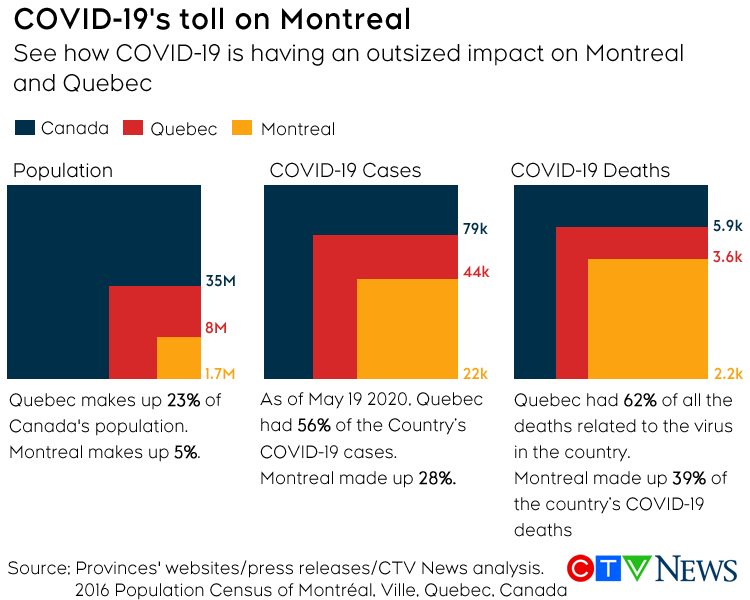 Why has the city been hit so hard? There’s still much to be determined, infectious disease specialist Matthew Oughton told CTV’s Your Morning on Tuesday.

“The entire final story has not yet been written,” he said. But there are significant factors likely at play.

COVID-19 causes the most severe illness in people who are older with multiple health problems, a population group of which Montreal has many as the biggest city in the province.

“We have a higher proportion per capita of people in these long-term care facilities” Oughton said.

Last week, Quebec Premier Francois Legault visited the city for the first time in the pandemic and said the Quebec society is to blame for what has happened in Montreal.

“I think the society failed,” he told reporters.

Per capita, there are three times more elderly people in long-term care facilities in Quebec “than anywhere else in the world,” he said, adding that they have been underfunded and understaffed for years.

Quebec has the earliest March break of any province, which Oughton said likely contributed to the city getting hit early and hard by COVID-19 weeks before quarantine and physical distancing measures were widespread.

“We got a large influx of disease early on,” he said. “I wouldn’t be surprised if there was community transmission earlier than we expected while we were still looking for it in the travelling population, but that’s going to remain to be proven.”

In efforts to quell the spread early on in long-term care facilities, the provincial government took an “all hands on deck” approach, said Oughton, making the decision to move many workers from hospitals to those facilities, which are called CHSLDs in Quebec.

It was a “short-term fix,” he said, but may have contributed to further spread.

“I believe that posed a risk to those workers who then might be coming back to their original places of work without having been properly quarantined,” he said.

Another subset of the population that has been hit hard by COVID-19 are the poorer boroughs of the city.

“It really seems like this virus is ‘programmed’ to take advantage of our society’s weakest and most vulnerable,” said Oughton. Not only has the disease attacked elderly people and those with existing health problems, it appears to be targeting those are who “socioeconomically disadvantaged,” a fact that hasn’t played to Montreal’s favour, said Oughton. The city has some of the poorest neighbourhoods in the country with some of the worst rates of child poverty.

“This really speaks to the importance of proper housing, good ventilation,” said Oughton, “all these kinds of measures that we know are important determinants of health.”