TORONTO -- The new school year has barely begun and already, cases of COVID-19 are being reported at hundreds of schools across the country, leaving some parents scrambling to understand how to proceed as they navigate protocols including when their child should be tested, whether they need to self-isolate, and when they can return to school.

Just days and weeks after in-person classes resumed, more than 480 schools in Quebec and more than 200 in Ontario have at least one case of COVID-19 so far. New cases are being reported almost daily and many cohorts are in self-isolation.

One elementary school in Quebec City, for example, announced a two-week closure after 20 students and five staff members tested positive for the virus. A high school in Pembroke, Ont., became the first to close in the province after four staff members and one student tested positive. Edmonton reported two schools “under watch,” a designation by the province when a school has five or more cases.

And this does not account for all the children sent home with runny noses, coughs and other symptoms that need assessing -- amid concerns of a second wave and increasingly longer lines and wait times at test centres across the country.

To get a snapshot of the different protocols, CTVNews.ca looked at the policies of 18 school boards and regions across the country. Most adhere directly to COVID-19 guidelines set out by provincial and territorial health officials, though some boards have made adjustments or implemented additional guidelines beyond provincial mandates.

Region to region, protocols differ slightly in terms of mask requirements, which symptoms will require children to stay home, whether testing is encouraged or required, when students are allowed to resume classes, and more.

Provinces and school boards generally have some level of mask wearing requirement or recommendation for older elementary students and up, particularly when cohorting or physical distancing is difficult.

The Toronto District School Board (TDSB) -- the largest in Canada representing more than 240,000 students -- and its Catholic counterpart, are among the exceptions, requiring masks to be worn in all grades when indoors, not just for grades 4 and up as stipulated by the province.

The territories and Atlantic provinces, in contrast, do not require masks inside classrooms. Cases, if any, are few and far between in these regions, so masks are recommended or required only in situations where distancing can not be maintained, such as on buses or when in common areas like hallways.

Parents and caregivers are expected to carry out daily health screenings at home, though TDSB parents, for example, are asked to sign a form each day or use an app confirming that a health check was conducted, in order to help facilitate the daily intake screening process at the school. The Toronto Catholic board mandates a second screening at school by staff.

In contrast, daily checks are not necessary in Nunavut, which has yet to report a positive case. Daily screening requirements kick in if a region within the territory enters “stage 2,” which indicates an escalated risk of COVID-19 transmission.

The list of symptoms differs slightly from province to province, and from those listed on the Government of Canada’s website.

There is consensus across all jurisdictions around fevers and coughs as primary symptoms to watch out for that would require students to be kept at home. Most regions also have shortness of breath, a loss of the sense of smell or taste, sore throats, runny noses, and diarrhea on its list, though in some cases, these are considered secondary symptoms, meaning they would need to appear alongside another listed symptom for students to be kept at home and assessed.

In B.C., if one key symptom is present, students are advised to stay home for 24 hours until they feel well enough to return to class. If  symptoms persist or if two or more are present, they should get a health assessment. In Alberta, students are legally required to self-isolate for at least 10 days if they have signs of one of the primary symptoms.

But with many of the symptoms potentially minor on their own (is diarrhea a sign of COVID-19 or the aftermath of a bad dinner?), or similar to a cold or even allergies, it doesn’t take much for a student to get sent home. This has prompted some health officials to revisit which symptoms to include.

B.C. tried to find a balance by shrinking its list by more than half. Now, symptoms like a runny nose, sore throat, fatigue, or headache are no longer reasons to keep students home. These changes have raised concerns among some parents and teachers, but provincial health officer Dr. Bonnie Henry defended the changes, noting that the symptoms dropped from the list -- on their own -- typically did not indicate COVID-19. She also added that it was a “balancing act to make sure children are able to attend school as much as possible and minimizing the risk that they pose.”

Following the policy change in B.C., Ontario also amended its checklist so that certain symptoms appearing or worsening on their own would only require that children stay home for 24 hours and return to school after there is improvement and they feel well enough. Those symptoms are: runny noses, sore throats, headaches, gastric symptoms (nausea, vomiting, diarrhea), and fatigue/lethargy/malaise/muscle aches. If two or more symptoms appear, however, the initial guidelines around testing and mandatory self-isolation still apply. Manitoba has also indicated its intention to revisit the checklist in that province. 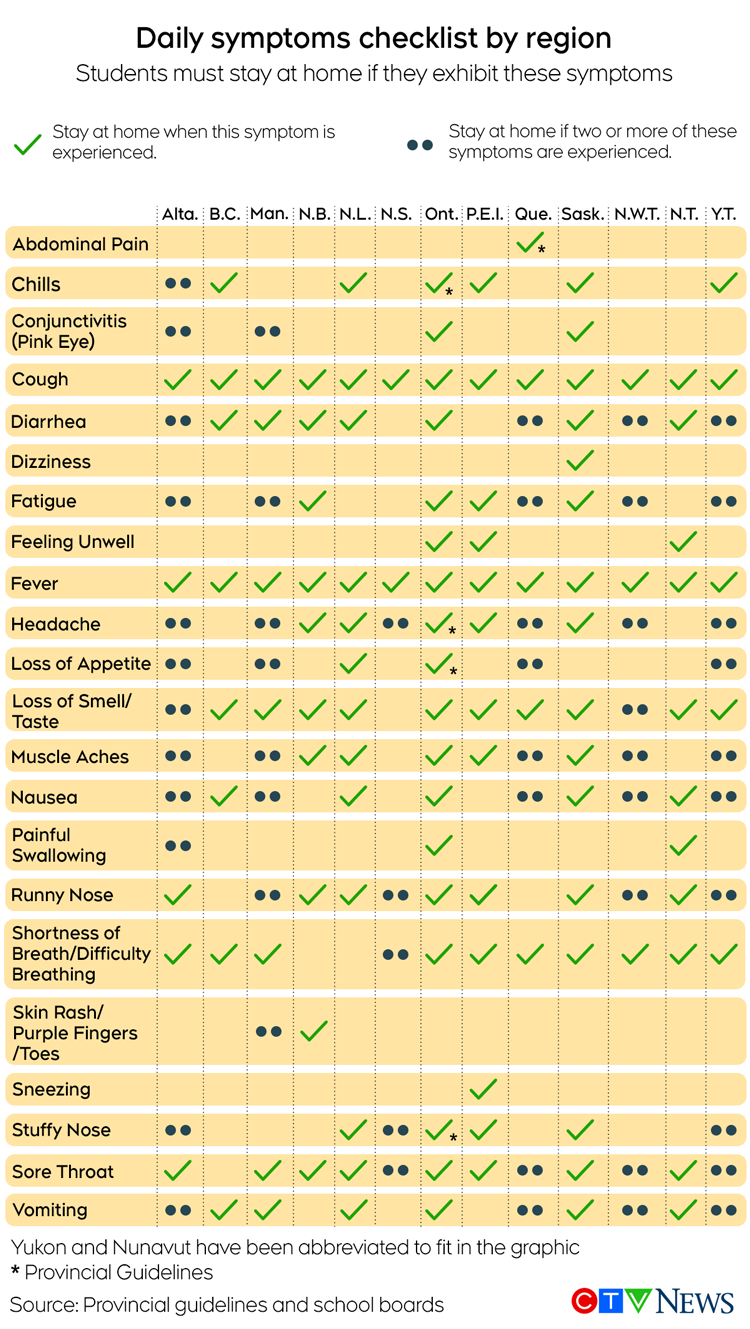 In most cases, the screening guidelines clarify that these should be new or worsening symptoms, or related to a chronic or known condition. B.C. and Nova Scotia, for example, make clear that students who have a pre-existing medical condition that can also cause similar symptoms (e.g. allergies) can continue to attend school as long as these pre-existing symptoms do not get worse.

B.C. does not require a medical note for verification, while Nova Scotia encourages families to inform the school. Alberta says a student “should” be tested at least once and have a negative result before returning to class so that a baseline of symptoms can be established, and recommends that the school be informed of a student’s pre-existing health condition.

If a student exhibits symptoms and is sent home, most provinces and territories require that they self-isolate for a specified period of time. An assessment by a health-care provider and testing or direction from the regional public health unit is strongly recommended but not required in most cases. And even with testing, a negative result is generally not required for students to return to school as long as the prescribed period of self-isolation and monitoring is met.

Saskatchewan is one of the few regions where testing is mandatory. According to the school reopening handbook for both Saskatoon Public Schools and Regina Public Schools, “if the student is referred for testing, they must remain home and self-isolate until they have received their results and direction from the health authority.” In Quebec, caregivers are required to contact public health and follow their guidelines, including any testing requirements.

The rules around self-isolation and when children can return to school after they’ve been sick also varies across jurisdictions. Students who either did not require a test after being assessed by a healthcare provider, or tested negative can return to school 24 to 48 hours after symptoms are gone or have significantly improved. The only exception to a negative result is if testing was conducted due to exposure to a positive case. In that case, the full 14-day quarantine period is required. Alberta specifies that an additional 10 days of self-isolation is required if the individual becomes sick during the 14-day quarantine period.

If a student tested positive, or did not get assessed and tested in B.C., Alberta, Manitoba and Yukon, they are required to self-isolate for 10 days after the onset of symptoms or until symptoms are gone, whichever is longer. For Saskatchewan, Ontario, Quebec and P.E.I., the self-isolation period is 14 days or until symptoms are gone. Many regions also ask that parents of sick children contact and follow their local public health unit for guidance and requirements.