Most Canadians likely to keep wearing a mask on planes and trains, despite loosened travel restrictions: Nanos

Most Canadians likely to keep wearing a mask on planes and trains, despite loosened travel restrictions: Nanos

Most Canadians say they are likely or somewhat likely to continue wearing a mask while travelling by plane or train, even after the federal government made face coverings optional, recent survey data from Nanos Research shows.

The survey, commissioned by CTV News, found 55 per cent of Canadians reported they were either likely or somewhat likely to continue wearing masks on planes or trains over the next 12 months.

Broken down, 35 per cent of those who responded positively said it was likely they’d wear a mask, while 20 per cent said they were somewhat likely.

But 35 per cent of those surveyed responded negatively to the question. Twenty-six per cent said they were unlikely to keep wearing a face mask while travelling by air or by rail, compared to nine per cent of survey respondents who said they were somewhat unlikely.

The federal government rescinded all of its COVID-19 border restrictions and rules, including its mask mandate for plane and train passengers, on Oct. 1.

At the time of the announcement on Sept. 26, the federal government pointed to waning infections from the Omicron variant, high vaccination, and lower hospitalization and death rates as factors behind the decision, along with the availability of boosters, rapid testing and COVID-19 treatments.

The number of COVID-19 patients in hospital has increased in Canada since roughly mid-September, rising from 4,265 on Sept. 17 to 5,373 on Oct. 10, the latest data from the Public Health Agency of Canada shows.

National hospitalizations are still below the April peak of about 6,800 and well below the more than 10,000 who were in hospital at various points in January during the height of the Omicron wave. 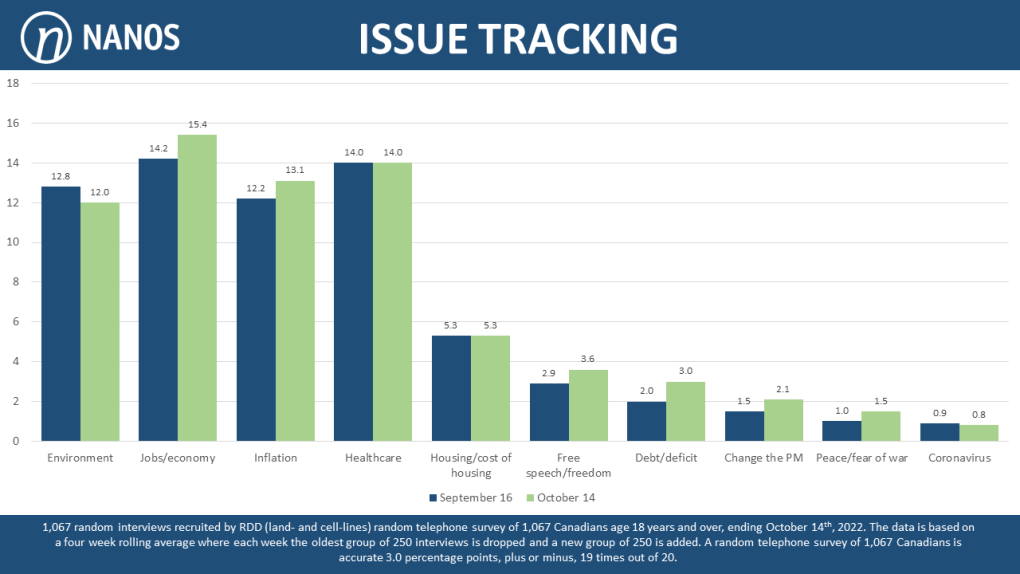 "So it looks like even though people are not worried about Coronavirus, there will be a significant proportion that are still exercising caution … in terms of their health," said Nanos Research Chair Nik Nanos on the latest episode of CTV News' Trend Line podcast.

"The reality is, if someone wants to wear a mask, they can wear a mask. It could be because of their personal situation in terms of their personal health. It could be that they're caring for someone who's a part of a vulnerable population. And I think wearing masks, although not required and will probably not be as widespread as we've seen before, is just going to continue to be part of our culture as part of a voluntary way for some Canadians to protect themselves and also to protect their loved ones," Nanos added.

Broken down by gender, men were less likely to say they would wear a mask on a plane or train than women.

About 45 per cent of men in the Nanos survey said they were likely or somewhat likely to wear mask up, compared to approximately 64 per cent of women.

Another 45 per cent of men said they were unlikely or somewhat unlikely to mask on planes, with about 25 per cent of women saying the same.

Nanos pointed out that statistic isn’t a surprise, because women are usually the ones "making health care decisions for other members of the family, perhaps children, or parents," he said. "They also tend to have key roles on the health care front. So it's probably not a big surprise that they're more likely to report saying that they could be using a mask, even though they don't need to, when they're traveling either by train or by plane."

Meanwhile, older Canadians, or those 55 and older, were more likely to say they would, or probably would, wear a face when flying than younger age groups at nearly 66 per cent, compared to about 49 per cent of Canadians 35-54 and approximately 46 per cent of those 18-34.

Much fewer Canadians 55 and older — 21.6 per cent — said they were unlikely or somewhat unlikely to continue masking, while nearly 40 per cent of those 35-54 and almost 47 per cent of Canadians 18-34 said the same.

Between regions, Atlantic Canada (68.8 per cent), Ontario (60.9 per cent) and B.C. (62.1 per cent) were the only ones where a majority of respondents said they were likely or somewhat likely to wear a mask when flying — those who said the opposite made up 21 per cent, 30.9 per cent and 29.6 per cent of respondents, respectively.

Fewer survey respondents in Quebec (45.1 per cent) said they were likely or somewhat likely to mask on planes compared to 37.5 per cent who said they would not or probably wouldn't.

In the Prairies, more respondents said they were unlikely or somewhat unlikely to continue wearing a mask on planes (47.7 per cent) than those who leaned more toward the likely category (44.9 per cent).

Nanos conducted an RDD dual frame (land and cell lines) hybrid telephone and online random survey of 1,037 Canadians, 18 years of age or older, between Sept. 30 and Oct. 3, 2022, as part of an omnibus survey. Participants were randomly recruited by telephone using live agents and administered a survey online. The sample included both land and cell lines across Canada. The results were statistically checked and weighted by age and gender using the latest census information and the sample is geographically stratified to be representative of Canada. Individuals randomly called using random digit dialling with a maximum of five callbacks. The margin of error for this survey is 3.1 percentage points, 19 times out of 20.

How much water do you need to drink in a day? 'Eight glasses a day' rule a myth: study

An Ontario woman has been charged after graphic video of a horse being dragged emerges, Alberta Premier Danielle Smith makes an about-face on a promise to legislate human rights protections for those who aren't vaccinated against COVID-19, and a former member of the Vancouver Canucks coaching staff files a human rights complaint against the team. Here's what you need to know to start your day.