TORONTO -- With more people escaping self-isolation for a springtime bike ride, infectious disease specialists say cycling may be one of the safer choices for outdoor activities during the COVID-19 pandemic.

“If you’re talking about a regular cycling experience, just people out on a normal recreational excursion, there’s probably not that big of a risk,” said Dr. Abdu Sharkawy in an interview with CTVNews.ca.

If you're not cycling on an indoor track, there isn't much to be worried about, experts suggest. But cyclists should still be wary of getting too close, using the same equipment and exercising so vigorously that respiratory droplets spread at greater volumes.

Cyclists should also be wary of who they choose to bike with. In Toronto, health officials are advising that residents bike “alone or with members of their household.”

“While we know that the risk for becoming infected with COVID-19 while passing someone on the street, or walking trail or bike path is low, we advise everyone to give each other space,” wrote spokesperson Dr. Vinita Dubey, associate medical officer of health, in an email to CTVNewsca.

With safety in mind, cities across Canada are expanding bike lanes and cycling shops are running out of stock as more people get outside. Businesses in a number of major cities have reported spikes in bike sales in recent weeks as weather improved. In Toronto on Thursday, councillors approved a 25-kilometre expansion of the city’s bike paths for the summer, citing physical distancing measures.

Since each person rides their own bike, transmission via surfaces isn’t much of a concern, said infectious disease expert Dr. Isaac Bogoch.

“You can never say anything is 100 or zero per cent. But I think the risk is just so small,” he said. “If you’re using the same equipment, wash your hands afterwards. But apart from that, I can’t think of any high-contact surfaces that are shared. You can easily physically distance yourself from others. And it’s outside. Sounds like a perfect plan.”

Part of the safety of cycling is the fact that it is done outdoors, said Sharkawy.

“That dissipates the viral transmission and mitigates risk to a certain extent for sure but it doesn’t remove the risk entirely,” he said.

Here’s what else you should know about cycling during the pandemic.

Experts stress that measures such as hand-washing, physical distancing and face coverings can help prevent transmission, and the choice of specific activities over others could also boost protection. If you’re planning on going outside with someone who is not within your household, cycling may have its benefits over walking.

“The risk of sharing coronavirus by biking is probably a fair amount lower than when you’re walking next to someone,” said infectious disease specialist Dr. Abdu Sharkawy. “The airstream is not quite as consistently directed between those people who are biking because you’re moving in slightly different planes.”

Sharkawy said that the main concern with using bikes during the COVID-19 pandemic is that avid cyclers may want to exercise in groups. Serious cyclers may ride in packs close behind one another to benefit from “drafting,” where there is less wind resistance behind another rider.

“If they’re breathing quite heavily and they happen to be unknowingly infected with COVID-19, there is a risk theoretically that they may aerosolize some of that viral matter to someone who’s in what’s called the slipstream behind them,” he said. “Someone in that sort of direct path behind them may actually be able to pick up viral particulate matter that’s not just in droplet form but may be in aerosolized form. In that situation, it may be advisable for people to be wearing masks when activity is vigorous.”

When it comes to casual, recreational cycling, riding in single file may be less of a concern since keeping six feet apart will be easier, he said.

An added risk to using bikes for activity is that exercise increases the rate of heavy breathing, which can increase an infected person’s ability to transmit the virus, said Sharkawy.

“When the respiratory rate goes up then theoretically any virus that is within your respiratory tract can be transmitted at a greater volume and obviously with a greater level of frequency than if you were engaging in ordinary activity,” he said.

“That would be a particularly unique circumstance of possible risk. Exactly how high that risk is is not very clear, but it’s certainly not negligible.” 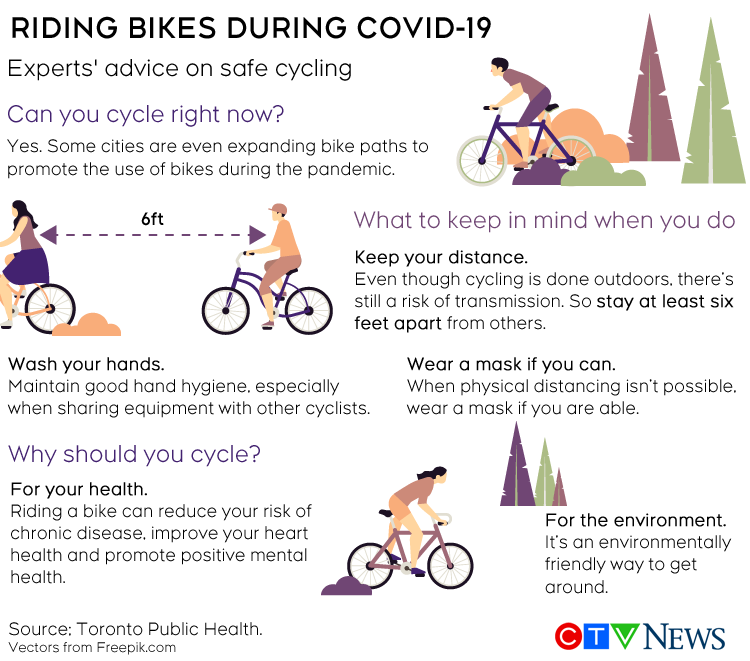