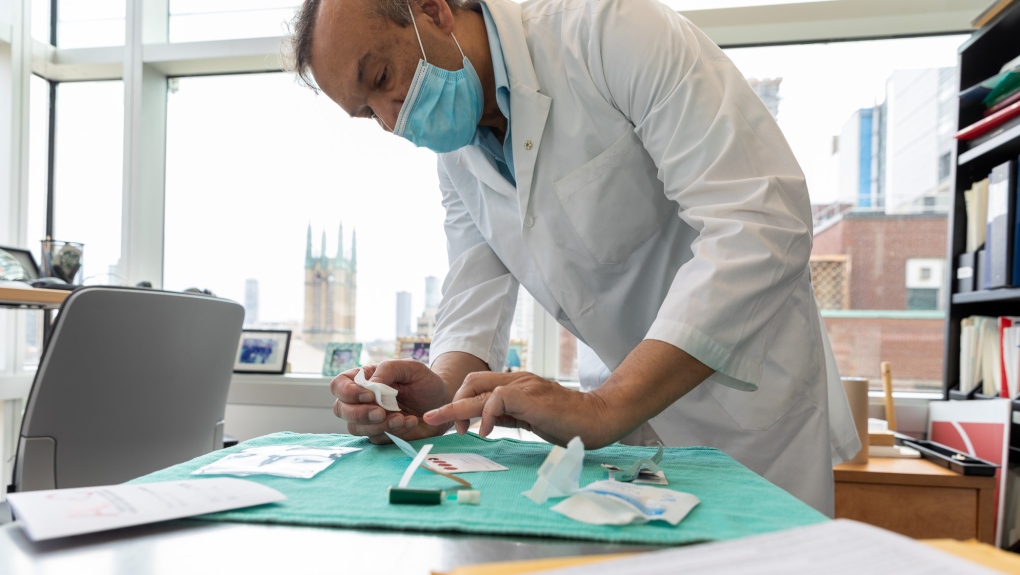 Dr. Prabhat Jha demonstrates how to use the home kit that will be sent to participants in the study. (Unity Health Toronto)

TORONTO -- After a person has developed antibodies against COVID-19, how long does that immunity last?

That is one of the crucial questions that a new study led by Toronto researchers is hoping to answer.

By testing the blood of more than 10,000 Canadians for antibodies, which are developed after a person is exposed to the virus to fight it off, the Action to Beat Coronavirus study is hoping to not only find out whether immunity fades with time, but also discover just what percentage of the Canadian population has been exposed to COVID-19 -- and how many of those people got the virus without displaying any symptoms at all.

This type of large-scale survey and testing has yet to be performed in Canada, according to Dr. Prabhat Jha, one of the study’s lead researchers and director of the Centre for Global Health Research at St. Michael’s Hospital of Unity Health Toronto.

“You want a true snapshot of the country,” he told CTVNews.ca in a phone interview Friday.

Those who get officially tested for COVID-19 are generally those who are showing clear symptoms. Because of this, the current testing alone doesn’t provide the full picture of the virus’s spread in Canada, Jha said.

This study, launching this month, is a collaboration between the University of Toronto, the Centre for Global Health Research at Unity Health Toronto and the Angus Reid Institute.

And all of the testing will be done without participants leaving their homes.

As Jha explained the study over the phone from the hospital, the sound of his team working away in the background was audible. They were putting together the home kits that will let participants collect their own blood samples, he explained.

The first phase of the study is an online questionnaire that will be sent out to more than 10,000 Canadians through the Angus Reid Forum, a nationally representative database consisting of Canadians from across the country who have signed up to help with studies and surveys.

Those who fill it out will be asked about their experience with COVID-19. Participants will be selected randomly from those who agreed to have their blood tested, and kits will be sent out, starting in the first week of June.

The kit itself is simple. It comes with a lancet to draw blood, gauze, an alcohol wipe, a bandage, an information sheet, an instruction manual and a consent form.

A lancet looks “just like a little green pen,” Jha said, but when you “push it against the finger … it clicks and a small needle punctures the skin.

“When diabetics want to test their sugars at home, that's what they use to get a little finger prick of blood.”

Participants will place one droplet of blood onto five different circles on a special filter paper in the kit. The paper is then dried for two hours before participants mail it in the hospital to be analyzed for antibodies.

“It's a simple process that actually has been used in developing countries for quite a while, because doing blood-based studies [there] is really difficult,” Jha said. “So people have moved to this technology and interestingly, we're bringing it home to Canada.”

Jha said that home blood collection was the safest way to test in the time of COVID-19, when asking large groups of people to come into a hospital setting to give blood might not be a good idea.

The blood samples will be sent by participants to the laboratory at St. Michael’s Hospital of Unity Health Toronto.

There, researchers will use a combination of at least two different antibody tests to look at the samples, in order to minimize the risk of a faulty test skewing the results.

Participants will be able to see their results if they choose, but Jha cautioned that “these aren’t immunity passports.”

Even if a person learns that they have antibodies to fight the virus, “it doesn’t mean that you can go out and start kissing people on the street,” Jha said.

After four to six months have passed, participants will be asked to fill out a second set of questions and send in another sample of blood to be tested. It’s in this second round of results that researchers expect to get the most revealing data.

“Then we can see, [for] the people who were infected, did they keep the antibodies -- which is a sign of protection -- or did they lose them?” Jha said.

“And also are there new infections in people who weren't infected before? So that gives you some sense of ongoing transmission. Then finally we'll be able to say, well, by linking to the health records of testing, if someone had antibodies, did it protect them against getting infected in the followup period?

“Very basic questions, but they have not been answered for the whole of Canada,” Jha pointed out.

WHAT RESEARCHERS HOPE TO FIND OUT

It’s known that when a person is exposed to COVID-19, they develop antibodies that fight the disease, a natural reaction that most doctors agree provides immunity against the virus for some time after they’ve recovered. But there is still only preliminary data on this antibody response, and it’s unknown how long this immunity lasts.

For some other viruses, the immune response wanes with time.

“People get repeat colds every year or even in one season, cause the protection to those goes down,” he said.

With many countries beginning to slowly re-open their economies, having a clearer picture of that immunity response is even more important, especially considering that there is no vaccine for COVID-19 yet.

This makes it all the more important to figure out what percentage of the population may have caught the virus but are asymptomatic.

“That's why we put an emphasis on trying to get a good random sample and encouraging even people who aren't infected -- or don't think they’ve been infected -- to participate,” Jha said.

“So, you know, we're saying give your finger to help grandma, basically.”

Jha said that they will be looking at demographic info for the participants, and will be working to reach out to any groups that are underrepresented in the sample of the population that they end up testing.

Because those who are older are more at risk of developing severe complications or dying as a result of COVID-19, researchers are aiming to get a larger sample of older adults than other age groups in their testing.

Once researchers receive the results from the first round of tests, they’ll be able to share some preliminary data by July or August, Jha said. Data related to the length of immunity will come later on after the second round of tests are performed in four to six months time.

This data could help policy-makers by providing a clearer look at the true rate of infection.

The results of the study could even assist with pinpointing the fatality of this virus in Canada, Jha said. If this study shows what percentage of Canada may have contracted the virus, that data can be compared to the existing data showing the hospitalization and death rate.

“By looking at the ratio of those, you can get a real indication of just how fatal this virus is and in what age groups,” Jha said. “And then that will be actually quite informative to thinking about strategies of what do you do in a second wave. Do you try to say, we’ll not worry too much about young people or do you worry about young people?

“All of those things that are currently guesswork will be much more informed.”