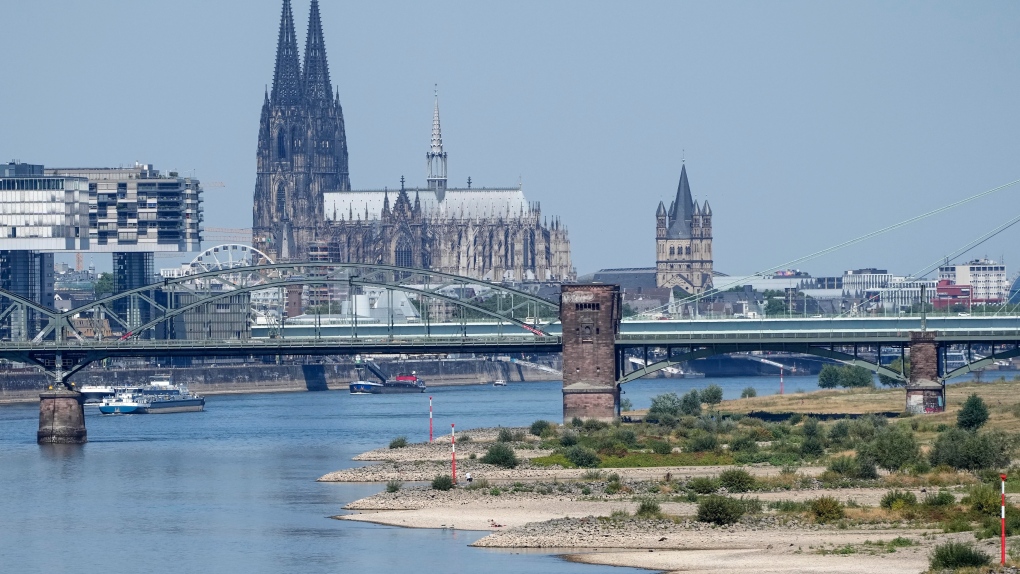 Water levels on the Rhine River could reach a critically low point in the coming days, German officials said Wednesday, making it increasingly difficult to transport goods -- including coal and gasoline -- as drought and an energy crisis grip Europe.

Weeks of dry weather have turned several of Europe's major waterways into trickles, posing a headache for German factories and power plants that rely on deliveries by ship and making an economic slowdown ever more likely. Transporting goods by inland waterways is more important in Germany than in many other Western European countries, according to Capital Economics.

"This is particularly the case for the Rhine, whose nautical bottleneck at Kaub has very low water levels but which remains navigable for ships with small drafts," said Tim Alexandrin, a spokesman for Germany's Transport Ministry.

Authorities predict that water levels at Kaub will dip below the mark of 40 centimetres (16 inches) early Friday and keep falling over the weekend. While this is still higher than the record low of 27 centimeters seen in October 2018, many large ships could struggle to safely pass the river at that spot, located roughly mid-way along the Rhine between Koblenz and Mainz.

"The situation is quite dramatic, but not as dramatic yet as in 2018," said Christian Lorenz, a spokesman for the German logistics company HGK.

From France and Italy, Europe is struggling with dry spells, shrinking waterways and heat waves that are becoming more severe and frequent because of climate change. Low water levels are another blow for industry in Germany, which is struggling with shrinking flows of natural gas that have sent prices surging.

Due to the lack of water, ships bringing salt down the Rhine River from Heilbronn to Cologne that would normally carry 2,200 metric tons (2,425 U.S. tons) of cargo are only able to transport about 600 tons, he said.

"Of course, we hope that shipping won't be halted, but we saw in 2018 that when water levels got very low the gas stations suddenly had no more fuel because ships couldn't get through," Lorenz said.

Authorities are taking steps to shift more goods traffic onto the rail network and, if necessary, give it priority, said Alexandrin, the Transport Ministry spokesman.

Those other options will be more expensive and take longer, with the higher cost making it impossible in some cases, said Andrew Cunningham, chief Europe economist for Capital Economics.

The river transportation issues are not problematic for German industry as shrinking flows and rising prices for natural gas, he said, with Russia having reduced deliveries to Germany through the Nord Stream 1 pipeline to 20% of capacity. But the woes on the Rhine could still take a small bite out of economic growth if they last until December, add a bit to already-high inflation and lead industrial production to drop slightly, the economist said.

But with Capital Economics already expecting flat economic growth in Germany in the third quarter and a contraction in the last three months of the year, "the low water level in the Rhine simply makes a recession even more likely," Cunningham said.

HGK and other shipping companies are preparing for a "new normal" in which low water levels become more common as global warming makes droughts more severe, sapping water along the length of the Rhine from the Swiss Alps to the North Sea.

"There's no denying climate change and the industry is adjusting to it," said Lorenz.

All new ships being ordered by the company will be built with a view to making them suitable for low water levels on the Rhine, he said.

Canadian actor Robert Cormier has died at age 33 after a 'tragic accident,' his sister says.

A federal judge signaled Wednesday that she plans to order disgraced R&B superstar R. Kelly to pay more than US$300,000 to one his victims in a decades-long scheme to use his fame to sexually abuse young fans.

An Ontario boy with terminal cancer wanted to see monsters. 1,000 strangers made it happen

A five-year-old Hamilton boy battling brain cancer had one request: he wanted to see monsters. Earlier this month, 1,000 strangers made his wish come true.