Interactive: What rising sea levels will do to popular Canadian sites 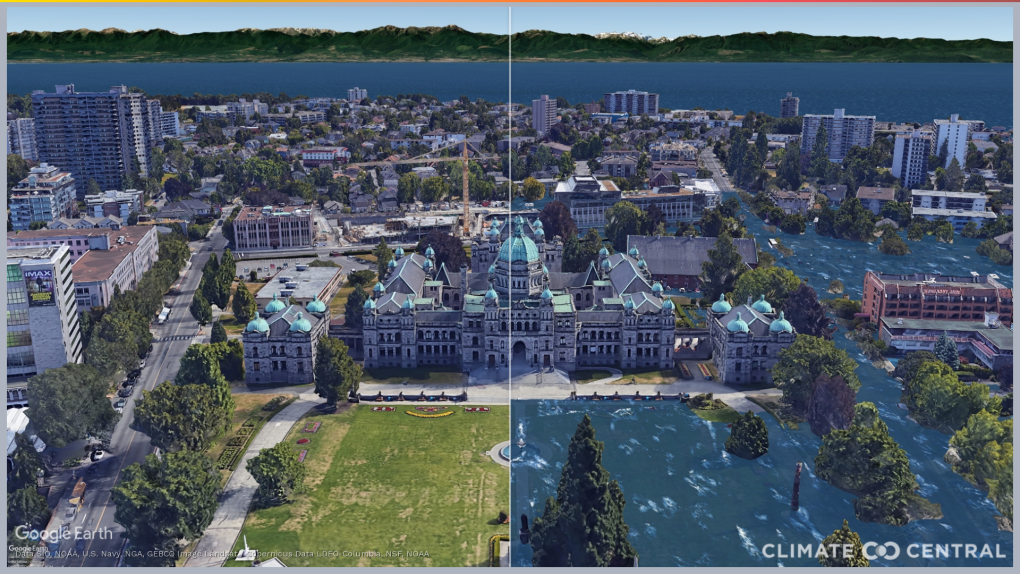 The Legislative Assembly of British Columbia is seen in this climate change visualization. (Courtesy Climate Central)

TORONTO -- New visualizations show how popular sites across the world, including in Canada, could be lost to rising sea levels if carbon emissions continue at their current rate.

The images, from non-profit Climate Central, show what areas of the world can be saved and what could be lost if the world fails to meet emissions reduction targets.

According to Climate Central, the land on which 10 per cent of the world’s population lives could be lost to sea level rise.

The photos suggest that 50 major cities, most of which are in Asia, are at risk and many small islands face near total land loss. The collection of photos also shows that one large nation on every continent -- with the exception of Australia and Antarctica -- could be lost to climate-driven sea levels.

Canada, alongside the U.S. and Europe, has raised greenhouse gas emission targets ahead of the COP26 climate summit in Glasgow, Scotland in November.

Canada announced in July that it was raising its target to cut 40 to 45 per cent of its emissions below 2005 levels by 2030.

A United Nations report released in September said that current pledges to reduce emissions will still result in levels 16 per cent higher globally by 2030, pushing global warming close to 2.7 C by 2100.

The Paris Agreement, which Canada signed, was ratified around the goal of keeping global warming around 1.5 C to avoid catastrophic climate change.

To meet the new goal, Canada has to cut between 292 million and 328.5 million tonnes of emissions each year for the next nine years.