What is National Day for Truth and Reconciliation, and who gets the statutory holiday?

What is National Day for Truth and Reconciliation, and who gets the statutory holiday? 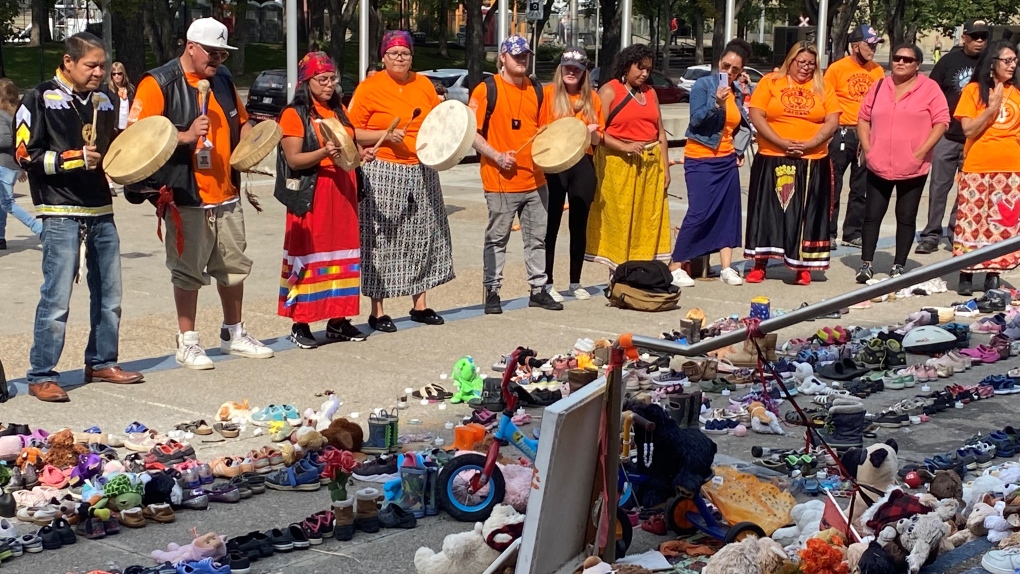 A temporary memorial for victims of Canada's residential schools is blessed by Indigenous elders in a pipe ceremony in Calgary on Aug. 26, 2021. Orange shirts are often worn on Sept. 30 to honour residential school survivors. (THE CANADIAN PRESS/Bill Graveland)
TORONTO -

Some people will have not one, but two statutory days off this month.

The National Day for Truth and Reconciliation, on Sept. 30, will follow Labour Day, on Sept. 6, for the first time.

The day has been created to give everyone an opportunity to recognize and commemorate the legacy of residential schools, which more than 150,000 First Nations, Metis and Inuit children were forced to attend between the 1870s and 1997.

As a federal statutory holiday, it is a designated paid holiday for federally regulated employees. That means people who work for the federal government or in workplaces such as banks, the post office or Via Rail are entitled to have the day off, or receive holiday pay if they do work.

Although there are about 10 federal statutory holidays, only five are paid days off for all employees in the country. Those are: New Year’s Day; Good Friday; Canada Day; Labour Day and Christmas Day.

In addition, private companies and organizations can decide if they want to honour optional or unofficial holidays. For example, some stores may choose to be closed on Boxing Day or Remembrance Day even in provinces where they are not designated holidays.

So the National Day for Truth and Reconciliation will be a paid holiday for federally regulated employees. The government of the Northwest Territories announced that its public servants, including teachers will also observe the holiday. And British Columbia has advised provincial public-sector employers to honour the day. In B.C., many public services will operate at reduced levels, but most schools, post-secondary institutions and some health sector workplaces and Crown corporations will be closed.

Most of the provinces have said they’re not officially observing the day as a paid day off.

The idea of having a such a day was one of the 94 recommendations in the Truth and Reconciliation Commission’s final report, which was released in June 2015. The day itself was officially created on June 3 this year, when Bill C-5 was passed by both houses of Parliament.

The move came shortly after the remains of about 215 children were discovered in late May by the Tk'emlúps te Secwépemc First Nation, on the grounds of the former Kamloops Indian Residential School.

More remains have been found since then, and more searches are underway across the country. The original report estimated that 6,000 children died while attending the schools, although many people expect the number to be much higher.