Reporters on the ground witnessed several people on Parliament Hill being put in handcuffs by police, including convoy organizers Chris Barber and Tamara Lich.

Fellow organizer Pat King confirmed Barber had been arrested. A lawyer representing some of the convoy's organizers confirmed on Twitter that Lich had been detained.

CTV News has learned Barber and Lich will face charges of mischief and counselling to commit mischief.

In video footage posted online of Lich being arrested, she can be heard telling the remaining protesters to "hold the line."

Despite the arrests, many protesters continued to dance in the snow while blasting music as dozens of rigs remained parked in the area.

Protesters have camped out since the end of January on Wellington Street, where Parliament is located, and in surrounding neighbourhoods to protest COVID-19 vaccine mandates and pandemic restrictions. In spite of recent court injunctions that were obtained to silence truck horns downtown, many continue to blare their horns.

Large numbers of police officers in yellow vests were seen Wednesday and earlier Thursday handing leaflets to protesters, warning them to leave or face the risk of arrest.

"We want to end this unlawful protest peacefully and safely," Bell said.

Bell said police from different parts of Ontario and Quebec, as well as the RCMP, have joined Ottawa officers and they are "absolutely committed" to ending the protest.

The city is preparing for its fourth straight weekend of demonstrations, as Environment Canada warns of a winter storm in the Ottawa area, with between 20 and 30 centimetres of snow expected by Friday morning.

Workers have installed new fencing around Parliament to harden the perimeter and police say actions to remove demonstrators and move vehicles that have now been blocking city streets for nearly three weeks will happen over the next couple days.

However, Bell maintained that the upcoming weekend in Ottawa will not look like previous ones.

Bell said there will be a secure area with over 100 checkpoints to make sure only those working and living in the downtown core will be allowed in, as well as those with a "lawful reason" to be in the area, such as a doctor's appointment.

The latest police warnings and arrests come following the federal government's invocation of the Emergencies Act on Monday, marking the first time it has been used since becoming law in 1988.

Under the act, police say anyone coming to Ottawa to join the protests is breaking the law. However, many demonstrators refuse to leave even under the threat of losing their commercial licences or having their vehicles seized.

Police, members of the federal government and other officials have commonly referred to the protests as an unlawful "occupation" and have warned protesters to go home or face severe consequences.

The Children's Aid Society of Ottawa urged parents on Wednesday to make "necessary alternate care arrangements" should they be separated from their children due to police actions as the Emergencies Act prohibits children from participating in the protests. Ottawa police have repeatedly mentioned the 100 or so children living in the trucks.

Meanwhile, a proposed class-action lawsuit on behalf of Ottawa residents has been expanded to include some businesses as plaintiffs, and is now seeking $306 million from not only truckers but donors and others. 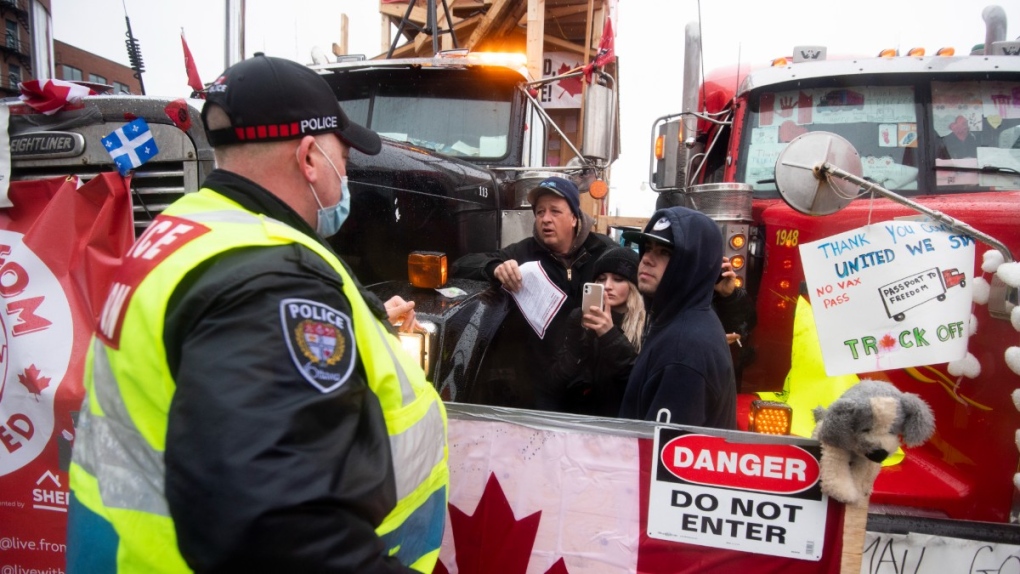 Police hand out a notice to protesters on the 21st day of a protest against COVID-19 measures that has grown into a broader anti-government protest, in Ottawa, on Feb. 17, 2022. THE CANADIAN PRESS/Justin Tang

Police hand out a notice to protesters on the 21st day of a protest against COVID-19 measures that has grown into a broader anti-government protest, in Ottawa, on Feb. 17, 2022. THE CANADIAN PRESS/Justin Tang

The House of Commons began debating the government's use of the Emergencies Act on Thursday, with MPs set to work through the weekend before voting on Monday.

While the additional powers granted by the act are in effect, including a ban on public assemblies deemed to be unlawful and the ability to freeze protesters' bank accounts without a court order, the House and Senate must confirm the decision to use the legislation.

The Conservatives and Bloc Quebecois have said they will not support the motion, while NDP Leader Jagmeet Singh says his caucus supports the use of the Emergencies Act, but only cautiously and with restraint.

Despite criticism over the need to invoke the Emergencies Act, including from some premiers, Prime Minister Justin Trudeau maintains that the federal government is not limiting freedom of expression or the right to peacefully protest, but is rather reinforcing values and institutions that keep Canadians safe.

The Canadian Civil Liberties Association has also criticized the move and is seeking a judicial review of the government's decision to invoke the Emergencies Act.

The group said in a statement that it believes the measures are unconstitutional and will be asking the courts to step in to defend the rule of law and the constitutional rights of all Canadians across the country.

Speaking in the House of Commons on Thursday, Public Safety Minister Marco Mendicino called the protests illegal and said Ottawa residents have been "terrorized," including those at an apartment building that was the site of an attempted arson.

Mendicino confirmed the blockades in Coutts, Alta., Surrey, B.C., Windsor, Ont. and Emerson, Man. have all been resolved, and an effort to revive a protest at the Ambassador Bridge in Windsor was thwarted.

However, a small group of protesters continues to demonstrate outside of the Manitoba legislature in Winnipeg, and another protest is scheduled for this weekend in Quebec City.

During a news conference Thursday, Deputy Prime Minister Chrystia Freeland said the RCMP has shared the names of individuals, businesses and crypto wallets associated with the protests with banks and accounts have been frozen.

Although she wouldn't confirm how many accounts have been frozen, saying she did not want to "jeopardize" the work of law enforcement, Freeland told reporters that those details will be disclosed in "due course and soon."

As part of the emergency order, the federal government is broadening anti-money laundering and terrorist financing rules to cover crowdfunding platforms and their payment services.

Those companies are being required to register with FINTRAC, or the Financial Transactions and Reports Analysis Centre of Canada, and report large and suspicious transactions. Financial institutions also will be able to report anyone believed to be involved in the blockades to the RCMP or Canadian Security Intelligence Service.

With files from CTV News and The Canadian Press

A gunman opened fired inside a busy shopping mall in the Danish capital on Sunday, killing several people and wounding several others, police said.