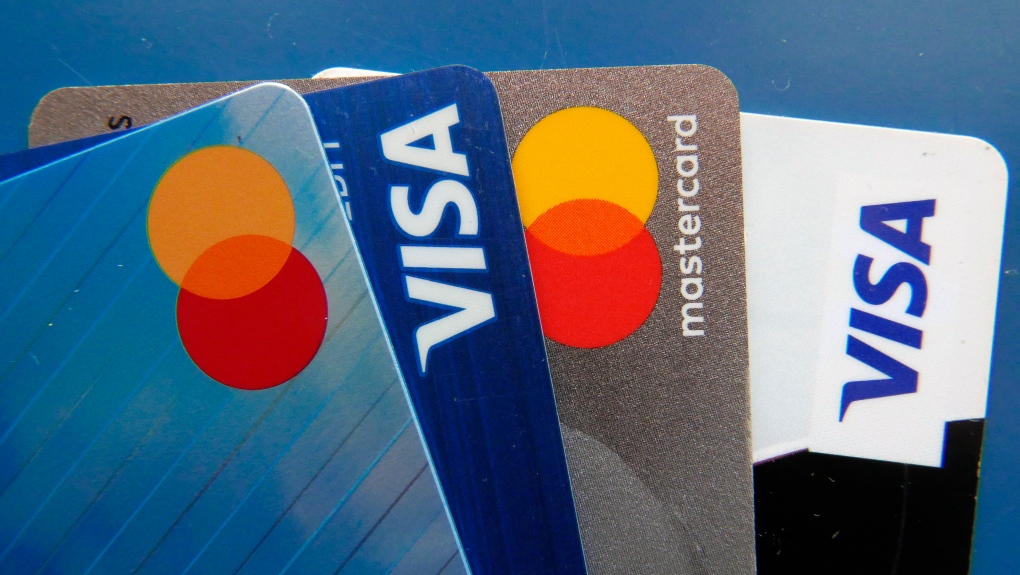 Credit cards as seen Thursday, July 1, 2021, in Orlando, Fla. Statistics Canada says the amount Canadians owe relative to their income moved higher in the second quarter as the level of debt grew faster than their earnings. THE CANADIAN PRESS/AP/John Raoux
TORONTO -

J.D. Power's survey of 6,478 Canadian credit cardholders released Thursday found the average consumer spent $1,144 per month on their primary card this year, down $11 from a year ago.

However, the consumer data firm discovered cash, debit and other non-credit card-related spending is up 51 per cent this year.

The findings come as Canadians are grappling with soaring costs as inflation sits at 7.6 per cent and interest and mortgage rates climb with further hikes anticipated.

Credit cards remain popular for handling such headwinds -- J.D. Power found customer satisfaction with credit cards is 764 on a 1,000-point scale -- but some Canadians are considering alternatives when buying big ticket items.

"Overall credit card customer satisfaction in Canada has been remarkably steady for the past several years, and we're even seeing some increases in satisfaction with product and benefit-level satisfaction, but macroeconomic trends and growing competition from alternative lending providers should raise concern for card issuers, "John Cabell, managing director of payments intelligence at J.D. Power, said in a news release.

J.D. Power found 36 per cent of credit card customers would consider other financing options such as personal or instalment loans and buy now, pay later services, when making large purchases.

Personal loans are the most popular of the lending alternatives, considered by 21 per cent of customers mulling a large purchase, followed by buy now, pay later companies at 17 per cent.

"Steps taken now to tighten up problem resolution, better align rewards and benefits with customer needs and improve customer engagement will be critical for customer retention and growth as we enter a potentially difficult economic cycle."

His company's research found 27 per cent of credit card customers feel they completely understand their card's benefits and features and among cashback cardholders, satisfaction with rewards declined "significantly" this year.

J.D. Power's study was conducted between May and June and reached its conclusions by asking consumers about benefits and services, communication, credit card terms, customer interaction and rewards offered by financial institutions and services.

One portion of the survey measured financial health by combining individual consumers' spending/savings ratio, credit worthiness and safety net items like insurance coverage, and placed the respondents on a continuum from healthy to vulnerable.

More than half of respondents with credit cards are now classified as financially unhealthy, up nine percentage points from a year ago.

J.D. Power highlighted that this shift is even more pronounced than what has been seen in the U.S., where the proportion of financially unhealthy credit card customers edged up by four per cent this year.

It also pointed out that 24 per cent of credit card customers in Canada consider themselves worse on a financial basis this year compared to last.

More than 30 per cent of credit card customers say they are carrying revolving debt on their primary cards, up from 24 per cent in 2021.

This report by The Canadian Press was first published Sept. 14, 2022.