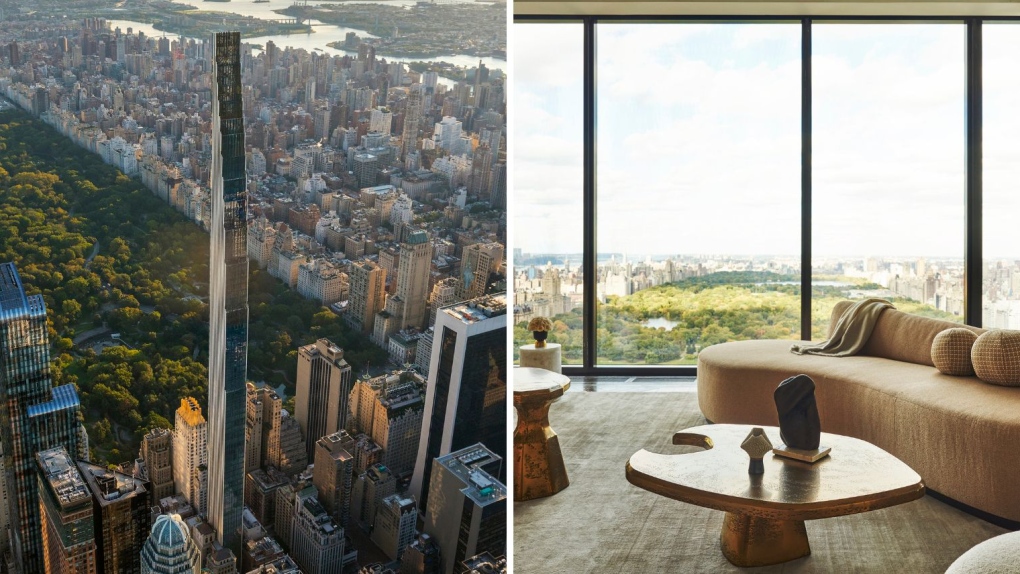 The designers behind the world's skinniest skyscraper have just given fans of ultra-luxury living an early Christmas gift. (Adrian Gaut via CNN)

The designers behind the world's skinniest skyscraper have just given fans of ultra-luxury living an early Christmas gift.

New York-based firm Studio Sofield has unveiled the interiors of Steinway Tower, the newly constructed 1,428-foot-tall tower overlooking Central Park. The announcement marks the completion of the opulent midtown Manhattan landmark, which was built on a site once occupied by the historic Steinway & Sons piano company.

According to Studio Sofield, Steinway Tower's interiors were designed to evoke the grandeur of New York's Gilded Age, a period in the late 19th century when the city's boulevards were lined with the stately mansions of robber barons like Andrew Carnegie and Cornelius Vanderbilt. It sits on a Midtown street, filled with gleaming towers, that has become known as "Billionaire's Row."

Elsewhere, the building's interiors include an 82-foot-long swimming pool housed in a light-filled room featuring floor-to-ceiling windows and a row of Kentia palms. There's also a modern take on New York's legendary King Cole Bar, complete with an ornamental balcony and custom gold and silver murals.

Other amenities include private dining rooms with a chef's catering kitchen, a golf simulator and a landscaped terrace.

"I always am very personal in my work," Sofield said. "So (take) the swimming pool, for example ... I didn't want it to feel like a normal swimming pool. It has wood paneling with great detailing and gold leaf details.

"It has a vaulted ceiling," he added. "It has draperies... So it's very unlike any swimming pool you would find in New York."

With a height-to-width ratio of 24:1, Steinway Tower has been described by its developers as "the most slender skyscraper in the world." The tower's facade includes blocks of terracotta, a material that appears to change color and texture when seen in different lights and from different angles.

At 1,428 feet, it is also one of the tallest buildings in the Western hemisphere, standing just short of two others in New York City: The 1,776-foot-tall One World Trade Center and the 1,550-foot-tall Central Park Tower.

Super-slender skyscrapers, also known as pencil towers, became standout features of the Hong Kong skyline in the 1970s. Since then, major cities such as New York have followed suit.

Residences in the Manhattan skyscraper, which was developed by the JDS Development Group and Property Markets Group, range in price from $7.75 million to $66 million.