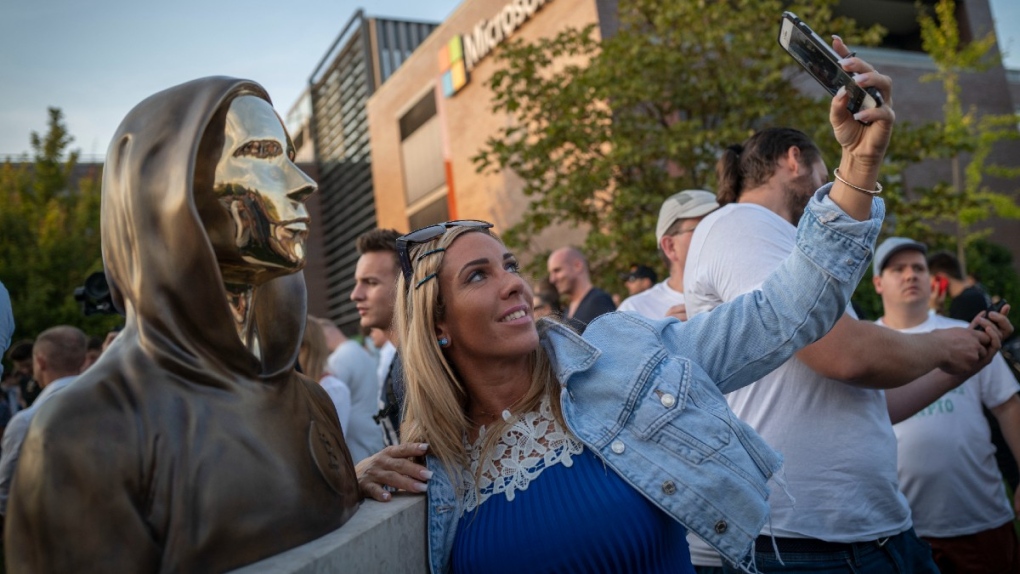 A woman takes a selfie with a newly unveiled statue of the mysterious developer of the Bitcoin digital currency in Budapest, Hungary, on Sept. 16, 2021. (Bela Szandelszky / AP)
BUDAPEST, Hungary -

An imposing bronze statue was unveiled in Hungary's capital on Thursday which its creators say is the first in the world to pay homage to the anonymous creator of the Bitcoin digital currency.

Erected in a business park near the Danube River in Budapest, the bust sits atop a stone plinth engraved with the name of Satoshi Nakamoto, the pseudonym of the mysterious developer of Bitcoin whose true identity is unknown.

"We think of Satoshi as the founding father of the whole cryptocurrency industry," said Andras Gyorfi, a Bitcoin journalist and the initiator of the project. "He created Bitcoin, he created the blockchain technology, he's the god of our market."

The featureless face of the bust, wrapped in a bronze hoodie emblazoned with the Bitcoin logo, is heavily polished to make it reflective like a mirror in which viewers can see themselves.

Its creators, sculptors Reka Gergely and Tamas Gilly, sought to portray a human form while staying true to the anonymity of Nakamoto.

"It was a big challenge. It is very difficult to make a portrait sculpture of a person that we don't know exactly what they look like," Gilly told The Associated Press. "I hope that through the language of sculpture I have managed to convey the basic idea of Bitcoin, that it belongs to everyone and no one at the same time."

Bitcoin was created in 2008 in the wake of the global financial crisis, and aimed to circumvent traditional financial institutions by developing secure technology for peer-to-peer online transactions without using intermediaries like banks.

Its founding white paper published that year was authored by Nakamoto -- a pseudonym which could refer to a person or group of people of unknown gender, age or national origin.

The organizers of the statue project invited Nakamoto to the unveiling, Gyorfi said, in the hopes of finally learning the true identity of the Bitcoin inventor.

But though the event attracted several hundred people, no one come forward to claim responsibility for developing the cryptocurrency that has attracted tens of millions of investors and was adopted this month as legal currency in El Salvador.

Gyorfi said the statue is a token of respect to Nakamoto, and an effort to "raise awareness toward blockchain and cryptocurrencies."

Along with other Hungarian Bitcoin enthusiasts, he collected around $10,000 in cryptocurrency donations to finance the creation of the bust.

But that had to be converted into Hungarian currency, he said, because "unfortunately the sculptors and other service providers don't accept Bitcoin yet."

World expected to consume twice as much seafood by 2050, new findings suggest

The world will consume twice as much seafood by 2050, according to new research. But despite the increased demand, a stronger turn to sustainable fishing could help address malnutrition and lower our overall environmental footprint.

The Chinese military on Sunday condemned the United States and Canada for each sending a warship through the Taiwan Strait last week, saying they were threatening peace and stability in the region.

Kingston police, with assistance from the OPP riot squad and Durham Regional Police, moved in twice on Saturday to clear students from the streets and homes after declaring an 'aggravated nuisance party'.

A rowdy student party at Acadia University in Wolfville, N.S. has resulted in multiple arrests and charges as hundreds gathered in the streets for homecoming celebrations over the weekend.