Payday, instalment loans on the rise in Canada due to pandemic: report

Payday, instalment loans on the rise in Canada due to pandemic: report 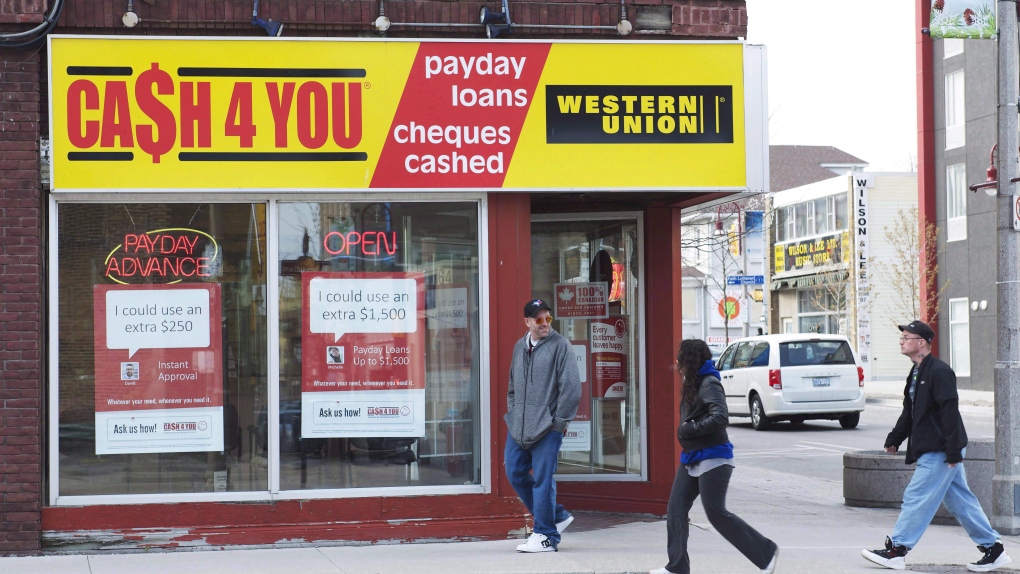 The pandemic has resulted in more Canadians seeking high-interest loans, a new survey has found, and advocates are calling on the feds to lower the maximum interest that lenders can charge.

ACORN Canada, a community group that advocates for low- and moderate-income Canadians, conducted the survey among its membership. Of the 439 people who took the survey between November 2021 and January 2022, 113 said they took a high-cost loan, such as a payday loan or an instalment loan, due to COVID-19.

Among these respondents, a quarter said they've had to take out a high-interest loan 10 or more times since the start of pandemic. More than half also said they first applied for a loan at a traditional bank or credit union but were denied. In addition, 83 per cent said they needed the loans to meet everyday expenses.

"When people have to take out the loans for basic expenses such as rent, groceries, phone, internet… that's kind of alarming," Peter Jongeneelen, a spokesperson for ACORN in New Brunswick, told CTVNews.ca on Tuesday in a phone interview.

Instalment loans are generally offered to borrowers with interest rates between 30 to 60 per cent and meant to be paid back within a fixed period of time. Payday loans are typically $1,500 or less for a period of 62 days or fewer and can have interest rates has high as 548 per cent, depending on the province.

These loans are offered by alternative lenders and are typically sought out by individuals who may not be able to access loans from traditional banks and credit unions due to poor credit, low income or a combination of both.

"They just don't qualify (for credit at banks) because their credit score is not good enough," Jongeneelen said. "They're forced to try and do whatever they can to keep a roof over their head, keep food on the table."

Suzette Mafuna was one of the ACORN members who took out an instalment loan. Mafuna relies on Old Age Security and went back to university in 2019 so she could find a good job and achieve financial independence. With rent, phone bills, debt and other expenses piling up, she took out an instalment loan in the early months of the pandemic to help her pay for school expenses.

"Nobody understands what it's like to be an average Canadian or struggling to make ends meet. These guys that are sitting in these offices are all rich. They've never lived our lives. It's all about money," she told CTVNews.ca on Monday over the phone.

The winding down of government COVID-19 supports such as CERB was cited as one of the reasons lower-income Canadians turned to high-interest loans. More than half of the respondents reported that their financial situation worsened because of the pandemic and continued need for financial support.

"CERB was great and changes that were made to EI were great. But then, they ended. Things like the lockout benefit, the caregiver benefit -- they were somewhat inadequate. We're still in the pandemic," Jongeneelen said, adding that Canada lost 200,000 jobs in January 2022 after the Omicron variant emerged, according to Statistics Canada.

The Criminal Code of Canada bans lenders from setting annual interest rates higher than 60 per cent. ACORN says the federal government should lower the criminal interest rate to 30 per cent.

But under section 347.1 of the Criminal Code, payday loans are exempt from the maximum interest restrictions as long as provinces bring in their own regulation.

In Ontario, B.C., Alberta, New Brunswick and P.E.I., payday lenders can charge a maximum of $15 per $100 loaned in a two-week period. That's equivalent to an annual interest rate of 391 per cent.

Quebec is the only province to have effectively banned payday loans. Interest rates for all loans in the province are capped at 35 per cent. ACORN is also calling for the federal government to follow Quebec's lead and repeal the section 347.1 exemption for payday loans.

During last year's federal election, the Liberals pledged to "crack down on predatory lenders by lowering the criminal rate of interest." This commitment was also identified as one of the priorities in Deputy Prime Minister and Finance Minister Chrystia Freeland's mandate letter in December 2021.

Adrienne Vaupshas, press secretary for Freeland's office, told CTVNews.ca in an email statement that the federal government will be starting consultations on lowering the criminal rate of interest soon, with further details to be "made available in due course."

"Too many lower and modest-income Canadians are forced to rely on high-interest short-term loans to make ends meet, leaving them in a cycle of debt. The government is committed to cracking down on predatory lenders by lowering the criminal rate of interest," she said.

But the Canadian Consumer Finance Association (CCFA), the industry group representing financial institutions that provide payday and instalment loans, says these changes could end up hurting low-income Canadians who otherwise wouldn't have access to any credit from traditional financial institutions. The CCFA argues this could push borrowers from seeking loans from illegal, unlicensed lenders.

"Instalment loans are expensive to provide and often high-risk. The credit score of the borrower is an important factor in determining the interest rate charged on an instalment loan and in fact, many applicants do not qualify for a loan because of their credit profile," the group said in an email statement to CTVNews.ca on Monday.

"Any reduction to the federal maximum interest rate will result in removal of access to credit for those Canadians with lower credit scores who previously qualified at the current rate."

ACORN is also calling for the federal government to make traditional banking more accessible. The suggestions include lowering the non-sufficient funds (NSF) fee for withdrawals from $45 to $10 and getting the federal government to guarantee bank loans for low- and moderate-income Canadians. ACORN also suggests introducing a postal banking system, where the postal service would operate a publicly-owned bank for those who don't have access to banks.

"It's upsetting that the banks don't seem to have anything that's a priority for those people have low- and moderate-income who need some sort of emergency loans," Jongeneelen said. "The government needs to act on this sooner rather than later."