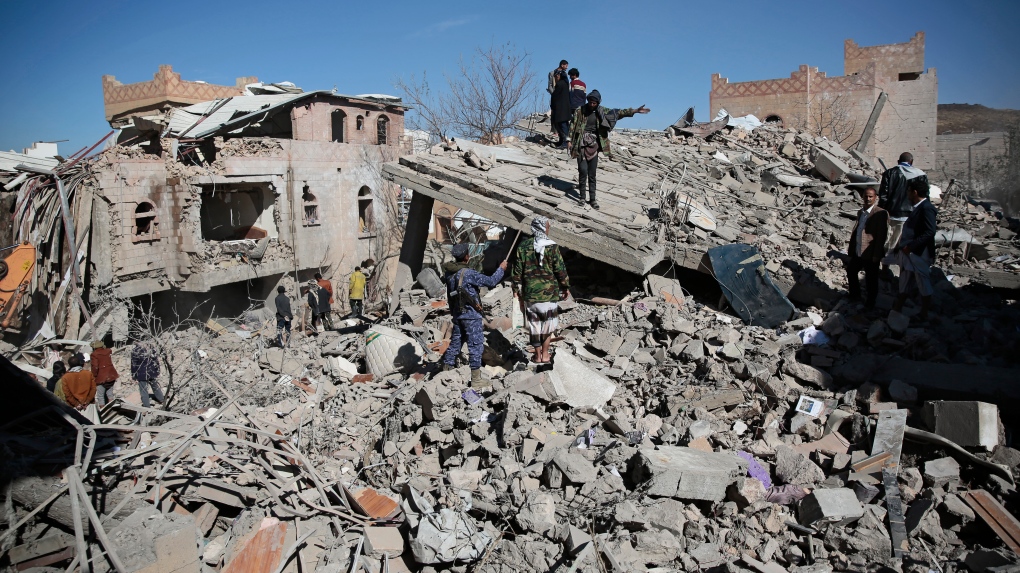 A Saudi-led coalition airstrike hit a prison run by Yemen's Houthi rebels on Friday, killing at least 70 detainees and wounding dozens, a rebel minister said. The strike was part of a pounding aerial offensive that hours earlier knocked the Arab world's poorest country off the internet.

The intense campaign comes after the Iran-backed Houthis claimed a drone and missile attack that struck inside the United Arab Emirates' capital earlier in the week -- a major escalation in the conflict in Yemen where the Saudi-led coalition, backed by the UAE, has battled the rebels since 2015.

Taha al-Motawakel, health minister in the Houthi government which controls northern Yemen, told The Associated Press that 70 detainees were killed at the prison and that he expects the number to rise as many others were seriously wounded.

Earlier Friday, a Saudi airstrike in the port city of Hodeida -- later confirmed by satellite photos analyzed by the AP -- hit a telecommunication center that's key to Yemen's connection to the internet. Airstrikes also hit near the capital, Sanaa, held by the Houthis since late 2014.

The escalation was the most intense since the 2018 fighting for Hodeida and comes after a year of U.S. and UN efforts failed to bring the two sides to the negotiating table.

Basheer Omar, an International Committee of the Red Cross spokesperson in Yemen, said rescuers continued to search for survivors in the rebel-run prison in the northern city of Saada. The Red Cross had moved some of the wounded to facilities elsewhere, he said.

Doctors Without Borders put the number of wounded alone at "around 200." Ahmed Mahat, MSF's head of mission in Yemen, said they had reports of "many bodies still at the scene of the airstrike, many missing people."

The organization Save the Children said the Saada prison holds detained migrants. "Migrants seeking better lives for themselves and their families, Yemeni civilians injured by the dozens, is a picture we never hoped to wake up to in Yemen," said Gillian Moyes, Save the Children's director in Yemen.

The Saudi-led coalition did not confirm the Saada attack. It has frequently struck civilian locations during the war, now in its eight year. It remained unclear if the detention facility was the intended target.

As for the airstrike in Hodeida, NetBlocks said the nationwide internet disruption began around 1 a.m. local and affected TeleYemen, the state-owned monopoly that controls internet access in the country after a strike on a telecommunications building. TeleYemen is now run by the Houthis who have held Sanaa since late 2014.

Over 18 hours later, the internet remained down. The Houthi's Al-Masirah satellite news channel said the strike on the telecommunications building killed and wounded an unspecified number of people. It released chaotic footage of people digging through rubble for a body as aid workers assisted bloodied survivors.

Save the Children said the Hodeida strike killed at least three children playing on a soccer field. Satellite photos analyzed by the AP corresponded to photos shared on social media of the telecommunications building being flattened by the airstrike.

The Saudi-led coalition acknowledged carrying out "accurate airstrikes to destroy the capabilities of the militia" around Hodeida's port. It didn't immediately confirm striking a telecommunications target, but instead called Hodeida a hub for piracy and Iranian arms smuggling to back the Houthis.

Iran has denied arming the Houthis, though UN experts, independent analysts and Western nations point to evidence showing Tehran's link to the weapons.

On Friday, Houthi supporters rallied, calling the airstrikes "an American escalation." Houthi media distributed video of thousands in the street. The Houthis commonly equate the Saudi-led coalition with the United States, condemning America in fiery terms.

A cut to the FALCON cable in 2020 caused by a ship's anchor also caused widespread internet outages in Yemen. Land cables to Saudi Arabia have been cut since the start of the war, while connections to two other undersea cables have yet to be made amid the conflict, TeleYemen previously said.

The Saudi-led coalition entered Yemen's civil war in 2015 to try and restore the country's internationally recognized government, ousted by the Houthis the year before. The conflict has turned into the world's worst humanitarian crisis, with international criticism of Saudi airstrikes that have killed hundreds of civilians and targeted the country's infrastructure. The Houthis meanwhile have used child soldiers and indiscriminately laid landmines across the country. Some 130,000 people, including over 13,000 civilians, have been killed, according to the Armed Conflict Location & Event Project.

The war reached into the United Arab Emirates, a Saudi ally, on Monday, when the Houthis claimed a drone and missile attack on Abu Dhabi, killing three people and wounding six. Although the UAE has largely withdrawn its forces from the conflict, it remains heavily involved in the war and supports local militias on the ground in Yemen.

In a veiled threat, Houthi military spokesman Yahia Sarie tweeted late Friday that foreign companies in the UAE should leave, saying it wasn't safe to be there "as long as the rulers of this state continue to attack our country."

UN Secretary General Antonio Guterres called Houthi attacks on the UAE a "serious mistake," saying they were "unacceptable." As for Friday's airstrike, he told a press conference that "any bombardments that target civilians ... (are) of course also unacceptable."

"What we need is to stop this vicious circle in which things get escalating one after the other," Guterres said. "What we need is to have, as we have been proposing from long ago, a cease-fire together with the opening of harbor and airports, and then the beginning of a serious dialogue among the parties."

The UN Security Council on Friday condemned the "heinous terrorist attacks" in the UAE as well as in other sites in Saudi Arabia claimed by the Houthis, and underlined the need to hold perpetrators "accountable and bring them to justice."

Lana Nusseibeh, UAE's ambassador to the UN, said the Houthi "terrorist attack is a clear threat to the entire international community." She insisted the coalition abides "by international law and proportionate response in all its military operations."

According to a U.S. statement, Secretary of State Antony J. Blinken spoke with Saudi Foreign Minister Prince Faisal bin Farhan Al Saud and condemned Monday's Houthi attacks on the kingdom and the UAE. Blinken reiterated U.S. commitment to help Gulf Arab partners improve defense capabilities against threats from Yemen and elsewhere in the region and "underscored the importance of mitigating civilian harm."