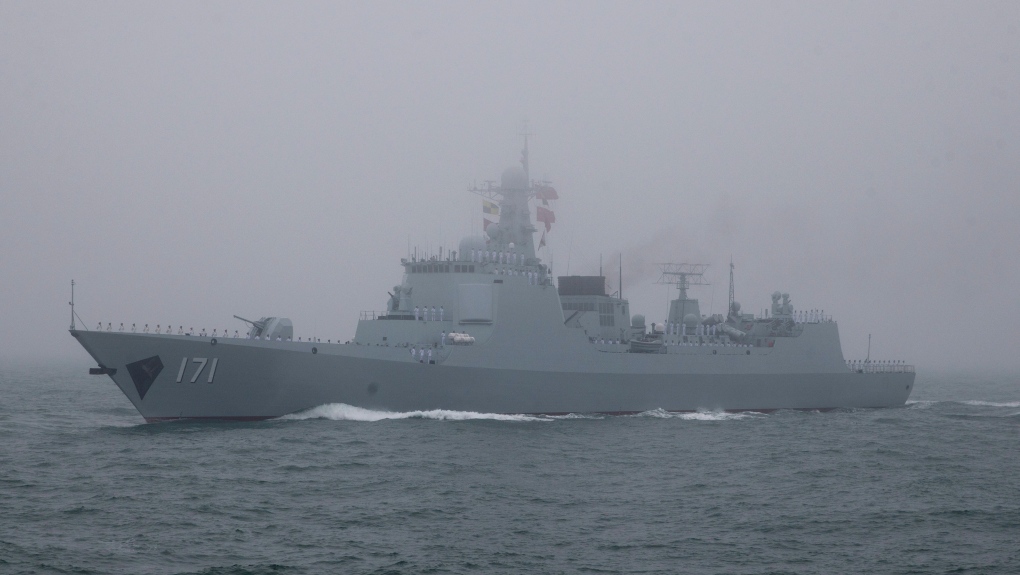 The type 052C destroyer Haikou of the Chinese People's Liberation Army (PLA) Navy participates in a naval parade to commemorate the 70th anniversary of the founding of China's PLA Navy in the sea near Qingdao in eastern China's Shandong province, Tuesday, April 23, 2019. (AP Photo/Mark Schiefelbein, Pool)

TOKYO -- Japan expressed concern Monday after China and Russia held a joint naval exercise in which 10 of their warships passed through international waterways between its northern and southern islands.

Yoshihiko Isozaki, the deputy chief Cabinet secretary, said at a regular briefing that it was the first time Japan has confirmed that Chinese and Russian naval vessels passed jointly through the Tsugaru and Osumi Straits and in waters near the Izu islands off the main island's southeastern coast.

The straits are considered international waters. Japanese officials said the Chinese and Russian ships did not enter Japanese territorial waters.

Japan considers China's increasingly assertive maritime activities as a regional security threat. The two countries are also locked in a dispute over Japanese-controlled East China Sea islands that China claims as part of its territory.

Japan also has a territorial row with Russia over a separate group of islands north of Hokkaido that has prevented them from signing a peace treaty formally ending their hostility in World War II.

Isozaki said officials also confirmed that the Russian warships sailed through the Tsushima Strait off the main island's northwestern coast after separating from the Chinese vessels. He said Japan's Self Defense Force confirmed helicopters flying off both the Chinese and Russian vessels and that Japan responded by scrambling its fighter jets.

"The Japanese government is paying close attention with high interest to their activities," Isozaki said. He said Tokyo will continue its vigilance and surveillance in waters and airspace around Japan.