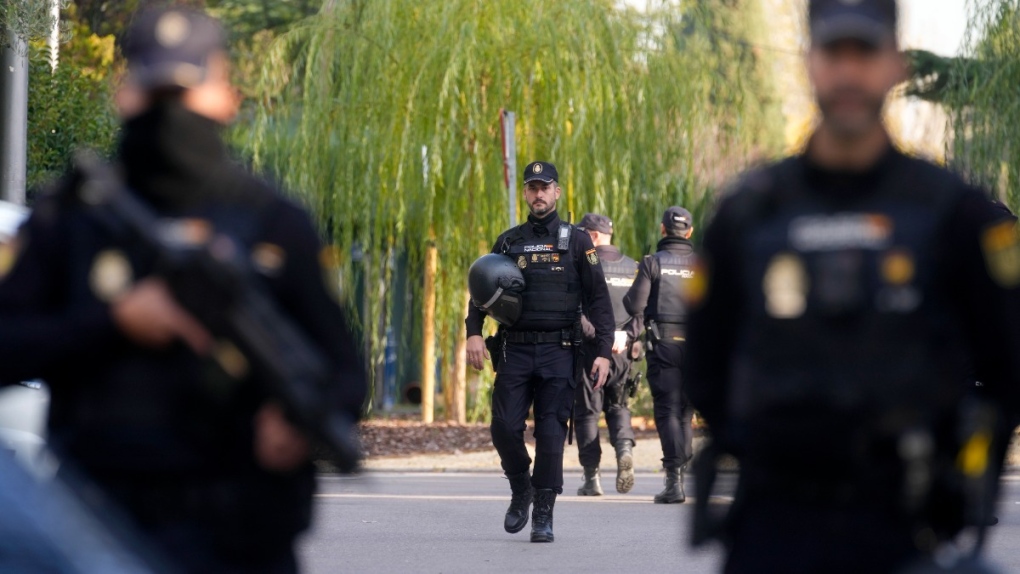 Police officers stand guard as they cordon off the area next to the Ukrainian embassy in Madrid, Spain, on Nov. 30, 2022. (Paul White / AP)
MADRID -

Spanish police are investigating a suspect letter bomb sent to an air base outside Madrid early Thursday, a day after a letter bomb exploded at the Ukrainian Embassy injuring an employee, the interior and defence ministries said.

Government officials said another explosive package was detected Wednesday evening at an arms factory in the northern Spanish city of Zaragoza. The factory makes grenade launchers which Spain has sent to Ukraine. Police carried out a controlled explosion of the parcel.

A government official said that the both the letter bomb in Zaragoza and the one at the embassy had the same email address written as the sender. No further details were given.

Spain's defence ministry said the package at the air base contained a suspect mechanism. Extra security forces were deployed to the Torrejon de Ardoz base, just east of Madrid.

It said the package was sent to base's Satellite Centre.

The embassy blast Wednesday occurred when an employee opened a letter addressed to the ambassador. The employee was not seriously injured.

Ukrainian Foreign Minister Dmytro Kuleba quickly ordered the strengthening of the security of all Ukrainian embassies. He also asked his Spanish counterpart to take urgent measures to investigate the attack.

Spain's National Court is investigating the blast as a terrorist act and extra security has been placed at the embassy.