Shooting suspect in hotel near Detroit surrenders to police

Shooting suspect in hotel near Detroit surrenders to police 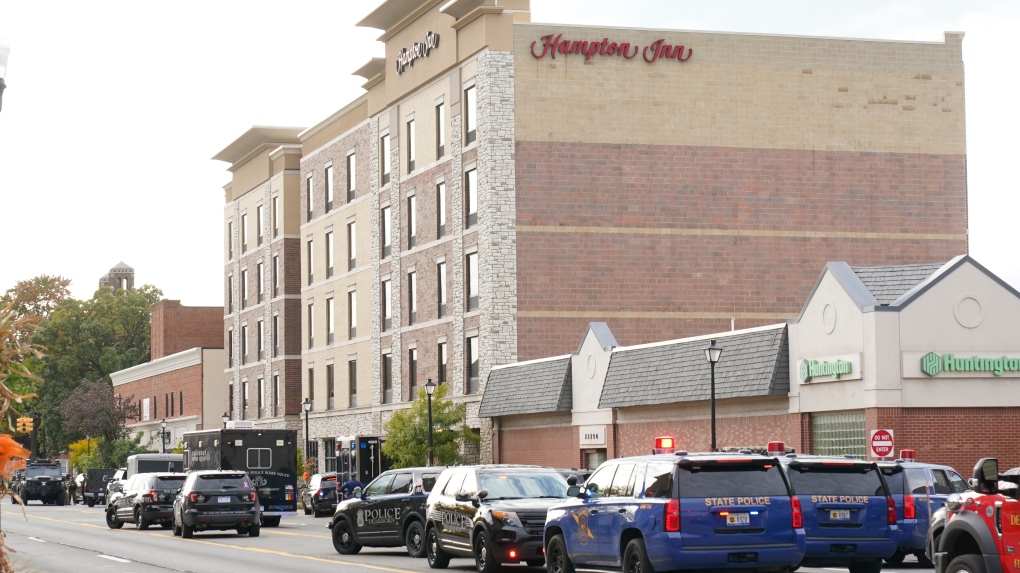 Police vehicles are parked outside the Hampton Inn in Dearborn, Mich., Thursday, Oct. 6, 2022. Police negotiated Thursday afternoon with a suspected gunman inside the suburban Detroit hotel after reports of gunfire led to evacuations and lockdowns in a popular dining and shopping area.(AP Photo/Paul Sancya)
DEARBORN, Mich. -

An armed man accused of shooting and wounding one person and who then barricaded himself inside a room at a suburban Detroit hotel surrendered Thursday night and was taken into custody, Michigan State Police said.

"The barricaded gunman has been taken into custody without incident," state police said on Twitter.

The surrender occurred shortly before 9 p.m. EDT, or nearly seven hours after the standoff began.

Businesses in the surrounding popular dining and shopping area were evacuated or locked down.

The barricaded gunman has been taken into custody without incident. Michigan Avenue is still closed and will be as the investigation continues.

The shooting early Thursday afternoon stemmed from a dispute over money with staff at the Hampton Inn in Dearborn, Police Chief Issa Shahin said at a news conference. The wounded person was taken to a hospital. Their name and condition were not released.

The suspect was contained in the hotel and armed with a long gun, Police Cpl. Dan Bartok told reporters.

"Negotiators are working, trying to resolve this peacefully," Bartok said.

Shots were reported shortly after 1 p.m. at the hotel in the busy district in Dearborn, a city of over 100,000 people just west and southwest of Detroit.Police evacuated the hotel and surrounding businesses. Traffic into the busy downtown was blocked, Michigan State Police Lt. Mike Shaw said.

Earlier, state police tweeted that the "situation is active and dangerous" and that shots still "were being fired by the suspect."

Officers in tactical gear could be seen, as well as emergency vehicles.

Some businesses near the hotel, including Dearborn Federal Savings Bank and Better Health Market, locked down with customers inside.

"There are police everywhere," said Cheryl Seguin, a security officer at the bank. "Police from multiple jurisdictions and federal, county, state agencies. Multiple police cars and other types of units -- EMS, just about everything."

First Nations leaders in Manitoba are calling for the resignation of Winnipeg's police chief after the force decided to not search a landfill for the remains of two Indigenous women.

The men’s FIFA World Cup is about to enter the quarter-final stage and CTVNews.ca takes a look at the major on-pitch storylines of the past week.