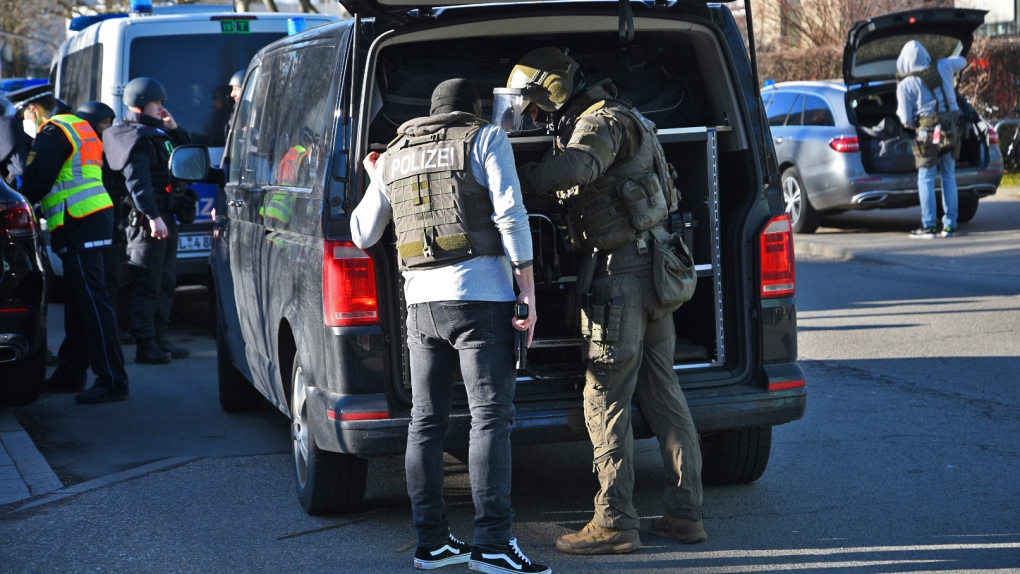 Members of the SEK stand by a vehicle on the campus of Heidelberg University in Heidelberg, Germany, Monday, Jan. 24, 2022. (R.Priebe/Pr-Video/dpa via AP)
BERLIN -

A lone gunman opened fire during a lecture at Heidelberg University in southwestern Germany on Monday and wounded four people, before killing himself, police said.

One woman who was shot reportedly died a few hours after being shot in the head, German news agency dpa reported citing unidentified security sources.

Police declined to confirm the report, but said a man had opened fire with a long-barrelled firearm in a lecture hall and then fled outside. They stressed that they believe he was acting alone and there was no longer any danger.

There was no immediate word on a possible motive. Officers at the scene could be seen examining two firearms and a bag.

Police said that the perpetrator was dead, and spokesman Stefan Wilhelm said on regional broadcaster SWR that he killed himself. They had earlier asked people on Twitter to avoid the Neuenheimer Feld area, home to a large university campus.

"It's been reported that one student has died of her injuries in the meantime," he said.

"It tears my heart apart to learn of such news," Scholz said, expressing his condolences to relatives, victims and students at the university.

The dpa agency also reported, without citing sources, that the gunman is believed to have been a student himself, and that security officials say initial indications are that he didn't have any political or religious motive.

Heidelberg is located south of Frankfurt and has about 160,000 inhabitants. Its university is one of Germany's best-known.