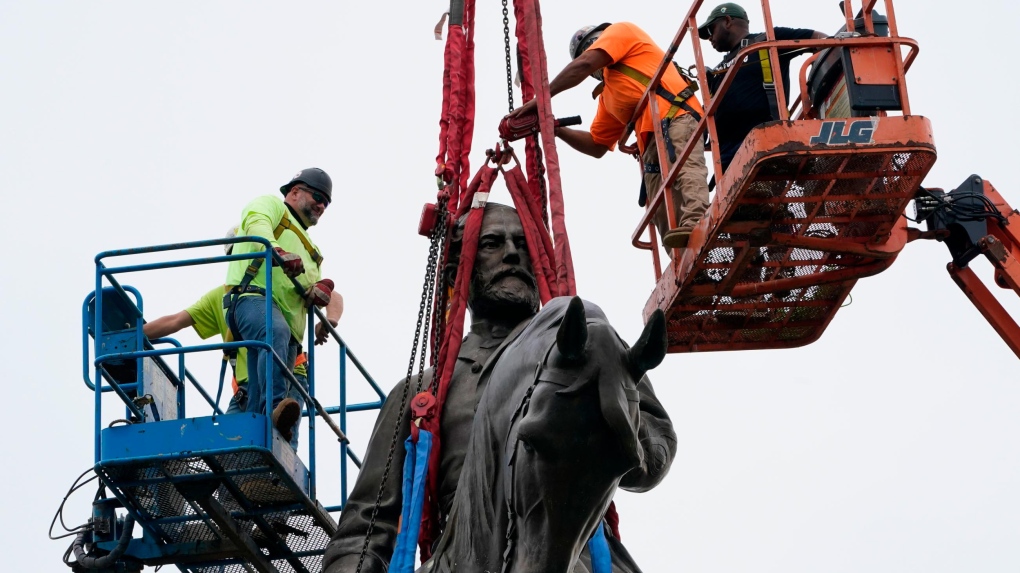 A pair of rulings from the state's top court last week cleared the way for its removal after intense national debate over the statue's purpose and place along the stretch of monuments on a tree-lined street in the city that was once the capital of the Confederacy. The statue, like other symbols of the Confederacy in the commonwealth and and across the U.S. including the busts of Confederate figures in the Virginia statehouse, was removed after the killing of George Floyd prompted a nationwide reckoning with police brutality and racism.

Alexcia Cleveland, 29, who went to Monument Avenue to see the statue come down, was emotional as the statue was lifted from the pedestal.

"It's electrifying," Cleveland told CNN. "It's bittersweet. I'm glad to see it down, but I would like to see more progress on issues such as police brutality and housing inequality."

She also said she never though she would see the statue's removal happen until the protests last year.

Lawrence West, founder of BLM RVA, told CNN Tuesday it is "very satisfying, gratifying" that the statue was being removed. His group has occupied the space surrounding the Lee monument -- unofficially dubbed by protesters the Marcus-David Peters Circle in honor of a Black teacher who was killed by police while experiencing a "mental health crisis" -- since June 2020 amid protests over Floyd's death.

"Robert E. Lee standing here on Monument Avenue is very symbolic to the Confederate mindset, you know the levels of oppression that people feel on a regular day-to-day basis," West said. "With the coming down of the monument it is also a part of coming down with those types of ideals. It brings some closure to the conversation, 'It's OK to be racist'."

Gov. Ralph Northam, a Democrat, had announced plans to remove the Lee statue in June 2020, but met legal challenges.

A group of Richmond residents sued, arguing that an 1890 deed and an 1889 General Assembly joint resolution prohibited the governor from directing the removal of a state monument from state property. The plaintiffs also claimed property rights to enforce the deeds, saying they required Virginia to perpetually keep the Lee statue in place.

In its opinion, the Virginia Supreme Court disagreed, saying that all the plaintiffs' claims were without merit and dissolved injunctions the lower court imposed.

Northam praised the rulings as a "tremendous win" in a statement last week and said pulling down the statue would help move the state and Richmond "into a more inclusive, just future."

Patrick McSweeney, an attorney for residents along Monument Avenue in one of the lawsuits, told CNN on Tuesday that he had informed the Virginia Supreme Court that he will request a rehearing.

Virginia Attorney General Mark Herring, a Democrat, on Tuesday countered that the state's high court "stated plainly that the prior injunction pending appeal was dissolved 'immediately.'"

And while some Monument Avenue residents tried to block its removal, more than 50 residents living on or near the street supported the statue's removal.

Marland Buckner, a business owner who has lived on Monument Avenue since 2015 and is one of the neighbours who supported the statue's removal, told CNN it has been "very difficult, frustrating" and at times "exhilarating" watching what has unfolded on his street over the past year and generally "a real challenge."

"Part of what people have to appreciate about, not just this monument but others like it, is that we've reached a point in public life where these things are an attractive nuisance. ... They're flashpoints for violence and conflict," Buckner said.

"While it is important on one hand to recognize and to celebrate that there is a certain amount of broad-based social urgency to removing these statues and other symbols of White supremacy, there is nothing like having bullets flying across your yard and having, as what was in our case, a Molotov cocktail light a truck on fire on my front step to focus your mind on what's important," Buckner added.

Richmond Mayor Levar Stoney, a Democrat, last summer invoked his emergency powers to remove several Confederate monuments honoring Gen. Thomas "Stonewall" Jackson, Gen. J.E.B. Stuart and others. And protesters had toppled a monument of Jefferson Davis, the president of the Confederate states during the Civil War.

COMBATING OPPRESSION AT THE LOCAL LEVEL

The statue will be placed in secure storage at a state-owned facility until a decision is made on its further disposition, officials said in a news release Monday. The granite pedestal the Lee statue sits on will remain in place during a community-driven effort to "reimagine" Monument Avenue, according to officials.

A time capsule at the monument is also set to be replaced with a new capsule made by Richmond sculptor Paul DiPasquale that will include 39 artifacts. A photo taken of a Black ballerina at the monument last summer, a COVID-19 vaccination card and Kente cloth are some of the items to be included.

"The past 18 months have seen historic change, from the pandemic to protests for racial justice that led to the removal of these monuments to a lost cause," Northam said in a statement Tuesday. "It is fitting that we replace the old time capsule with a new one that tells that story."

The statue and its surrounding area have most recently been an intersection of protests, dance, activism and even a somber place of reflection where a hologram of Floyd illuminated the statue last summer.

The pedestal, West told CNN, should go into a museum to be preserved as an artifact from a historical moment.

"This is ground zero and this expression has to be defended," he said, adding there is more to be done following the monument's removal, including curbing gun violence -- an issue Stoney declared a public health crisis in May.

Forget that soda bottle or errant tube of toothpaste. One airline passenger thought it was a dandy idea to place a six-pack of sharp or potentially dangerous items into his carry-on bag at LaGuardia Airport in New York City on Sunday.

'The kind of leader I am': Smith accepts sovereignty act amendments from UCP caucus

Alberta's premier says she is OK with her caucus making changes to the sovereignty act bill she introduced last week, while the NDP argued it would be better to scrap it altogether.