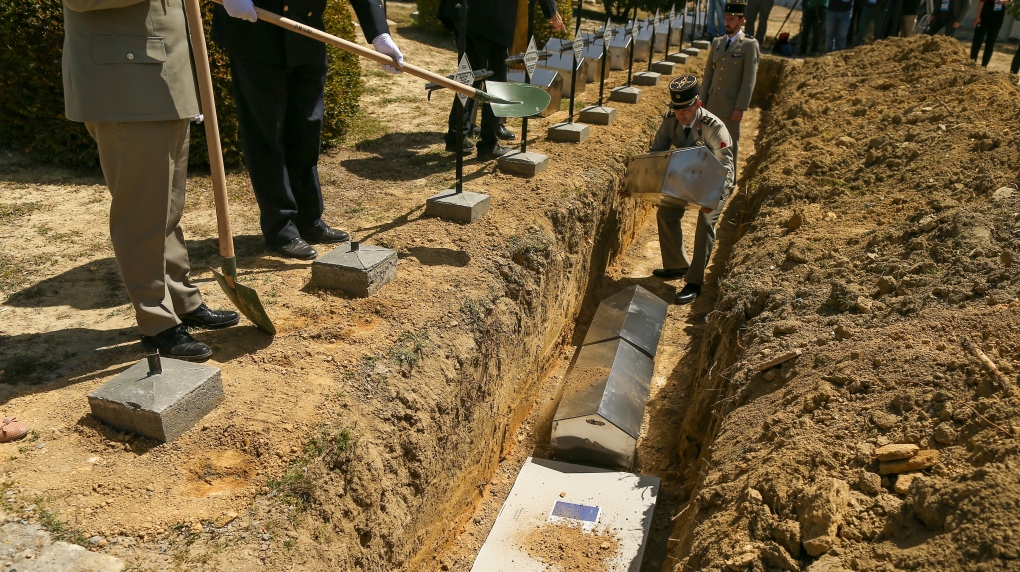 The remains of 17 missing French soldiers who fought in the First World War Battle of Gallipoli were on Sunday handed over to French military officials and put to rest alongside other fallen comrades more than a century after their deaths.

The remains were found during restoration work on a castle and surrounding areas on Turkey's northwestern Canakkale Peninsula, where Allied forces fought against Ottoman Turks in the ill-fated Gallipoli campaign that started with landings on the peninsula on April 25, 1915.

Col. Philippe Boulogne paid tribute to soldiers who "came to defend their homeland on this distant land, the scene of one of the most tragic episodes in our history" at the handing-over ceremony.

The ceremony coincided with commemorations marking the 107th anniversary of the start of the battle, during which French, British and other soldiers are remembered. On Monday, Australians and New Zealanders will mark Anzac Day to remember their fallen soldiers in a dawn ceremony.

"Zouaves (light-infantry corps) and riflemen from Senegal, Algeria, legionnaires, 10,000 French and colonial soldiers fell in the front at Gallipoli," Boulogne said. "Neither the scale of the losses nor the violence of the war diminished the bravery of these men. Their courage and their sense of sacrifice will never be forgotten."

Only one out of the 17 French soldiers -- Cpl. Paul Roman, of the 1st Engineers Regiment -- has been formally identified.

Authorities were also able to identify three tombstones belonging to Cmdr. Galinier of the 58th Colonial Infantry Regiment, and Capt. Stefani and 2nd Lt. Charvet of the 4th Zouaves, according to the French Embassy. Only their last names were provided.

The First World War Gallipoli campaign aimed to secure a naval route from the Mediterranean Sea to Istanbul through the Dardanelles, and take the Ottoman Empire out of the war. The Gallipoli landings marked the start of a fierce battle that lasted for eight months.

Ismail Tasdemir, the Turkish official in charge of the historical site, said during the handing-over ceremony that the former battlefields have now become a land of "peace, tranquility and trust."

At the soldiers' final resting place at the Seddulbahir French cemetery, French Embassy official Mathilde Grammont read from a message that modern Turkey's founder, Mustafa Kemal Ataturk -- a former Gallipoli commander -- wrote for the mothers of the fallen soldiers:

"You, the mothers who sent their sons from faraway countries, wipe away your tears; your sons are now lying in our bosom and are in peace. After having lost their lives on this land they have become our sons as well."