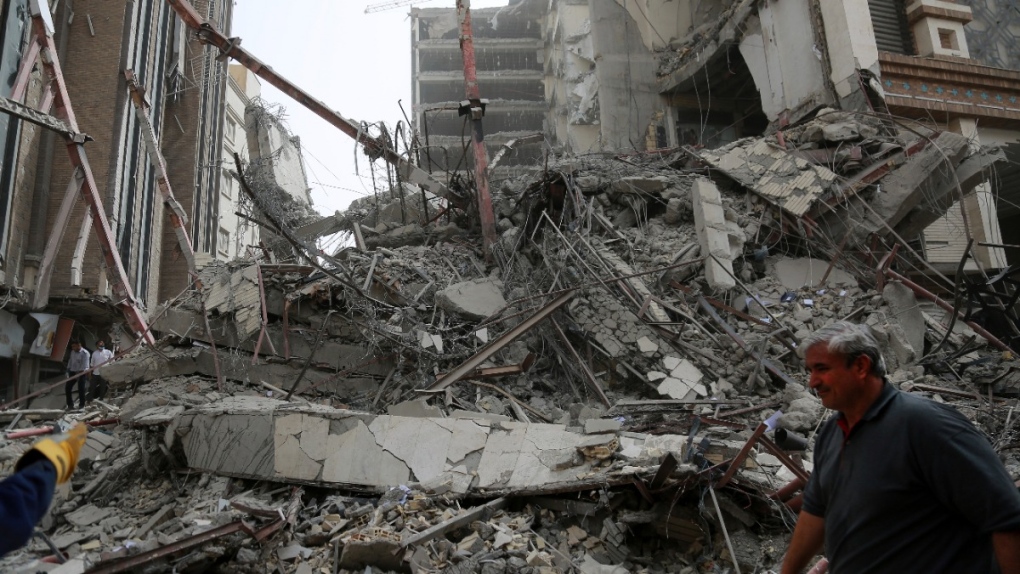 Rubble remains from a 10-storey commercial building under construction that collapsed in Abadan, Iran, on May 23, 2022. (Mohammad Amin Ansari, Fars News Agency via AP)
TEHRAN, Iran -

Rescuers dug through debris Tuesday of a building collapse in southwestern Iran that killed at least 11 people, fearful that many more could still be trapped beneath the rubble as authorities arrested the city's mayor in a widening probe of the disaster.

The collapse Monday of an under-construction 10-storey tower at the Metropol Building exposed its cement blocks and steel beams while also underscoring an ongoing crisis in Iranian construction projects that has seen other disasters in this earthquake-prone nation.

Video from the initial collapse Monday showed thick dust rise over Abadan, a crucial oil-producing city in Khuzestan province, near Iran's border with Iraq. The Metropol Building included two towers, one already built and the other under construction, though its bottom commercial floors had finished and already had tenants.

On Tuesday, an emergency official interviewed on state television suggested that some 50 people may have been inside of the building at the time of the collapse, including people moving into its basement floors. However, it wasn't clear if that figure included those already pulled from the rubble. At least 39 people were injured, most of them lightly, officials earlier said.

Aerial drone footage aired Tuesday showed the floors had pancaked on top of each other, leaving a pile of dusty, gray debris. A construction crane stood still nearby as a single backhoe dug. State TV said at least 11 people had been killed.

An angry crowd at the site chased and beat Abadan Mayor Hossein Hamidpour immediately after the collapse, according to the semiofficial ILNA news agency and online videos.

Police later arrested Hamidpour and nine others, Iranian media reported Tuesday. Initially, authorities said the building's owner and its general contractor had been arrested as well, though a later report from the judiciary's Mizan news agency said Tuesday that the two men had been killed in the collapse. The conflicting reports could not be immediately reconciled.

Authorities offered no immediate word on whether those detained faced charges and it wasn't immediately clear if lawyers represented them.

Iranian President Ebrahim Raisi offered his condolences and appealed on the local authorities to get to the bottom of the case. Iran's vice president in charge of economic affairs, Mohsen Razaei, and Interior Minister Ahmad Vahidi visited the site.

Lawmakers opened a separate parliament inquiry into the case Tuesday, trying to determine why the building on Amir Kabir Street collapsed during a sandstorm. However, there was no major earthquake recorded Monday near Abadan, some 660 kilometres (410 miles) southwest of Tehran.

A local journalist in Abadan had repeatedly raised concerns about the building's construction, beginning from last year, publishing images that he said showed sagging floors at the first tower. He also alleged corruption in the building permits process.

Abadan became the focus of development by the British beginning in 1909 as they built what became the world's largest oil refinery at the time. Iran later nationalized its oil industry in the decades before the 1979 Islamic Revolution.

Iraq's long war on Iran in the 1980s saw Abadan and the surrounding region destroyed in the fighting. In the years since, fast private and state-linked construction projects rebuilt the area, amid complaints of shoddy construction practices.

The collapse reminded many of the 2017 fire and collapse of the iconic Plasco building in Tehran that killed 26 people.

Abadan previously has suffered through historic disasters as well. In 1978, an intentionally set fire at Cinema Rex in the city killed hundreds. Anger over the blaze triggered unrest across Iran's oil-rich regions and helped lead to the Islamic Revolution that toppled Shah Mohammad Reza Pahlavi.

Two climate change protesters were arrested after they glued themselves to the frame of a famous John Constable painting hanging in Britain's National Gallery, the central London museum and police said.

The 30 NATO allies signed off on the accession protocols for Sweden and Finland on Tuesday, sending the membership bids of the two nations to the alliance capitals for legislative approvals -- and possible political trouble in Turkey.