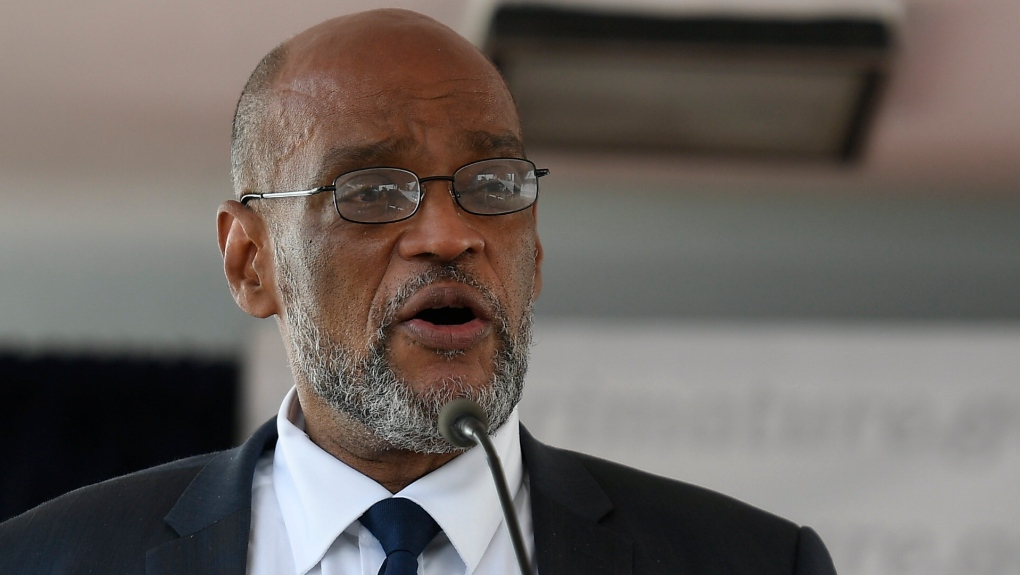 Ariel Henry speaks during his appointment as the new Prime Minister in Port-au-Prince, Haiti, Tuesday, July 20, 2021, weeks after the assassination of President Jovenel Moise at his home. (AP Photo/Matias Delacroix)

PORT AU PRINCE, HAITI -- The office of Haitian Prime Minister Ariel Henry issued its first public statement Thursday about evidence authorities say they have of phone calls between him and a key suspect in the presidential assassination, saying he received countless calls from people concerned for his safety following the slaying.

The office said it is unable to identify all those who called him or determine the nature of the conversations, noting that Henry couldn't take all the calls.

"After an act of such gravity, many people naturally wanted to inquire about his situation," the office said, referring to the July 7 assassination of President Jovenel Moise.

Former Port-au-Prince chief prosecutor Bed-Ford Claude, whom Henry dismissed this week, invited the prime minister to meet with him to talk about two calls between him and Joseph Badio that took place just hours after Moise was killed.

Badio once worked for Haiti's Ministry of Justice and at the government's anti-corruption unit until he was fired in May amid accusations of violating unspecified ethical rules. Police say they are looking for him on charges including murder.

Claude said evidence shows that Badio was in the vicinity of Moise's home when the calls were made, and on Tuesday, just hours before he was fired, Claude asked the judge in the case to charge Henry.

The prime minister's office said political interests do not allow anyone to make "serious and baseless innuendos, much less to attempt to hand someone over to popular retribution."

It added: "Conversations with individuals against whom charges are laid cannot, in any case, be used to incriminate anyone."

The office also said Henry is doing his utmost to identify all those involved and bring them to justice: "Nothing will distract him from this goal. It is a duty to the memory of the president, his family and the Haitian people."

Moise had selected Henry as prime minister shortly before he was killed, and he assumed the position a couple weeks after the assassination.

Henry's office issued the statement hours after Haiti's new justice minister pledged to find those responsible for high-profile killings as he spoke publicly for the first time since taking over from his predecessor, whom Henry also fired this week.

Justice Minister Liszt Quitel said he is prioritizing the killings of Moise and Monferrier Dorval, head of Port-au-Prince's Bar Association, who was killed at his home last August.

Quitel also said he aims to fight gangs and reduce lengthy pretrial detentions, with thousands of people languishing in prison for years without a single hearing.

"There is no more room for distraction or diversion, confusion and petty infighting," he said. "The task is immense."

Quitel takes over the position from former Justice Minister Rockfeller Vincent, whom Henry dismissed a day after he fired Port-au-Prince's chief prosecutor earlier this week for an undefined "serious administrative fault."

Quitel only briefly mentioned Moise's killing in his speech as he promised to establish coherence and harmony between Haiti's judicial and executive powers.

"We are living in difficult times with pressing needs for justice and security," he said.

Quitel is one of three new officials taking over top government positions in Haiti this week.

Claude was replaced by prosecutor Frantz Louis Juste, while Renald Luberice, who served as secretary general for Haiti's Council of Ministers, resigned on Wednesday, saying he could not serve under Henry and accused him of obstructing justice.

He was replaced by Josue Pierre Louis.

The abrupt firings and resignation have led some to question the future of the Tet Kale party in power as the investigation into Moise's killing continues while Haiti prepares for legislative and presidential elections scheduled for early November.

"It feels like whatever the outcome of the investigation, this is obviously a break between key figures," said Laurent Dubois, a Haiti expert and Duke University professor. "It might create cracks for other political actors to move in."

Dubois said he wonders whether those around Henry will support him or distance themselves from him in the near future, deepening Haiti's political instability as it not only tries to recover from the assassination but from an Aug. 14 earthquake that killed more than 2,200 people.

"If they feel he's kind of going down, they don't want to be next to him when it happens," Dubois said.

Shortly after resigning, Luberice, the former council of minister's secretary general, helped found a political movement called "Gathering of Jovenelists for Democracy," which aims to find justice for Moise. Among those in the group is Claude Joseph, the former prime minister who led the country after the assassination until Henry was installed.

Among those calling for Henry to step down is Haiti's ombudsman-like Office of Citizen Protection, which also urged the international community to stop supporting him.

However, the Core Group, composed of ambassadors from Germany, Brazil, Canada, Spain, the U.S., France, the European Union and representatives from the United Nations and the Organization of American States, issued a statement on Wednesday evening saying it supports efforts by Henry and other political leaders to form an inclusive government.