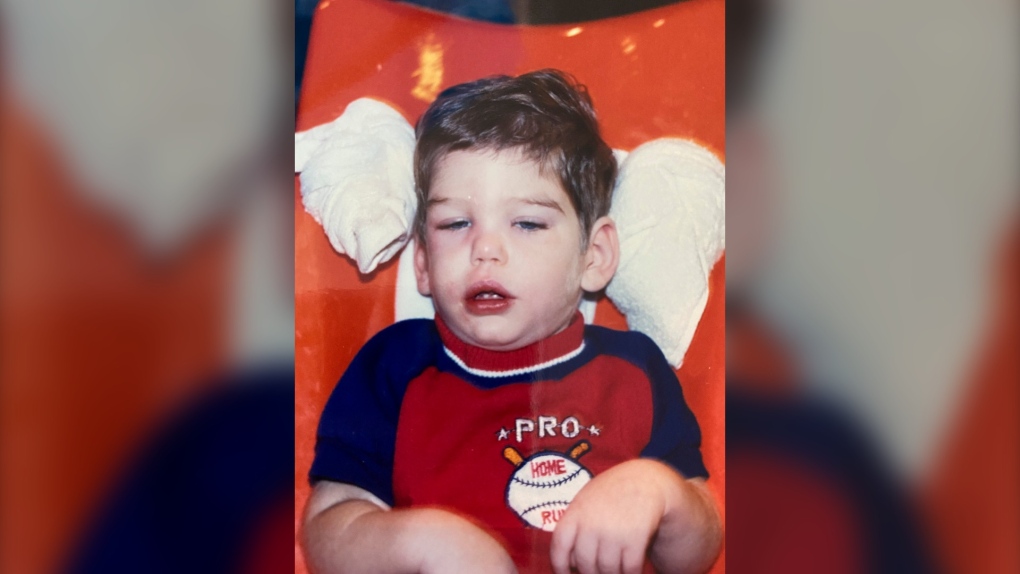 In this undated photo released by the Broward State Attorney's Office, Benjamin Dowling is seen as a toddler after he suffered a 1984 brain hemorrhage that prosecutors say was caused by his babysitter, Terry McKirchy, in Florida. McKirchy pleaded no contest to attempted murder in 1985 and received a light sentence, but was recently charged with first-degree murder. A medical examiner says Dowling's 2019 death was caused by his injuries. (Courtesy of the Dowling family/Broward State Attorney's Office)

FORT LAUDERDALE, FLA. -- Babysitter Terry McKirchy got a light sentence 36 years ago after pleading no contest to attempted murder for shaking 5-month-old Benjamin Dowling so severely that he suffered permanent brain damage -- weekends in jail for three months and three years probation.

But now McKirchy is facing a possible life sentence after a Florida medical examiner says Dowling succumbed to those injuries when he died in 2019 at the age of 35 after a life with severe mental and physical disabilities.

A Broward County grand jury recently indicted McKirchy, 59, with first-degree murder and she is now jailed near her home in Sugar Land, Texas, pending her return to Florida. McKirchy, who has previously denied injuring the boy, has waived extradition, the Broward State Attorney's Office said. The South Florida SunSentinel first reported the arrest.

"The passage of time between the injuries sustained and the death of the victim were considered by the forensic experts who conducted the autopsy and ruled the death was directly caused by the injuries from 1984," prosecutors said in a statement. "This case was presented to the grand jury, which determined that this was a homicide."

It is not known whether McKirchy has an attorney and the Broward Public Defender's Office, which represented her in the 1980s, did not immediately respond Monday to a request for comment. McKirchy told The Miami Herald in 1985 she was innocent, but accepted the plea deal to put the case behind her. Under the deal, she would only serve weekends until her third child was born and then she would be free.

"I know I didn't do it. My conscience is clear. But I can't deal with it anymore," McKirchy told the paper then. "I'm six months pregnant. You wouldn't believe what this has done to my family."

Rae and Joe Dowling, Benjamin's parents, said their first son never progressed after his injuries, depending on his family and others.

"Benjamin never crawled, fully rolled over, walked, never talked, never fed himself, he never enjoyed a hamburger or an ice cream cone, he could never tell us when he had an itch or anything hurt," the couple said in a statement. "When he cried in pain, we as a family and caregivers had to guess as to what was wrong and hope that we could satisfy his need."

They did not address McKirchy's arrest in their statement and, through the state attorney's office, declined interview requests.

The Dowlings had been married four years when Benjamin was born Jan. 13, 1984. Both Dowlings worked, so they hired McKirchy, then 22, to babysit him at her suburban Fort Lauderdale home.

Rae Dowling says when she picked up Benjamin from McKirchy on July 3, 1984, she instantly knew something was wrong. His fists were clenched and his body limp. She rushed him to the hospital, where doctors said he had suffered a brain hemorrhage from severe shaking.

McKirchy was charged with attempted murder and aggravated child abuse. The Dowlings told the Herald in 1985 they were stunned when prosecutor Barbara Mitchell told them of the plea deal McKirchy would receive. She had been facing 12 to 17 years.

Mitchell told the paper then the sentence was "therapeutic," but did not explain. Mitchell is still with the Broward prosecutor's office, but was not made available for comment. Another prosecutor is handling the current case. Ryal Gaudiosi, then McKirchy's public defender, called the sentence "fair under the circumstances." He died in 2009.

David Weinstein, a Miami defense lawyer and former prosecutor who is not involved in the case, said it is difficult to know what went into the 1985 deal. Perhaps witnesses were not available or the available medical evidence was not strong. Prosecutors may have felt McKirchy's pregnancy would make it difficult to get a conviction.

Today, he said, prosecutors may think a homicide case is stronger because perhaps the medical and scientific evidence has progressed. He said McKirchy's attorneys may argue that the time lapse will make it impossible for them to mount an adequate defence as witnesses may have died and memories faded.

"There are a lot of unanswered questions," he said.

The Dowlings said Benjamin endured several surgeries in his life, including having metal rods placed along his spine. He got nourishment through a feeding tube and attended rehab and special schools. The Dowlings had two more children and would take Benjamin to their games and performances. The family moved to Florida's Gulf Coast in the late 1990s. He died at their home on Sept. 16, 2019.

"Benjamin would never know how much he was loved and could never tell others of his love for them," they said. "Benjamin did smile when he was around his family, although he could never verbalize anything, we believe he knew who we were and that we were working hard to help him."