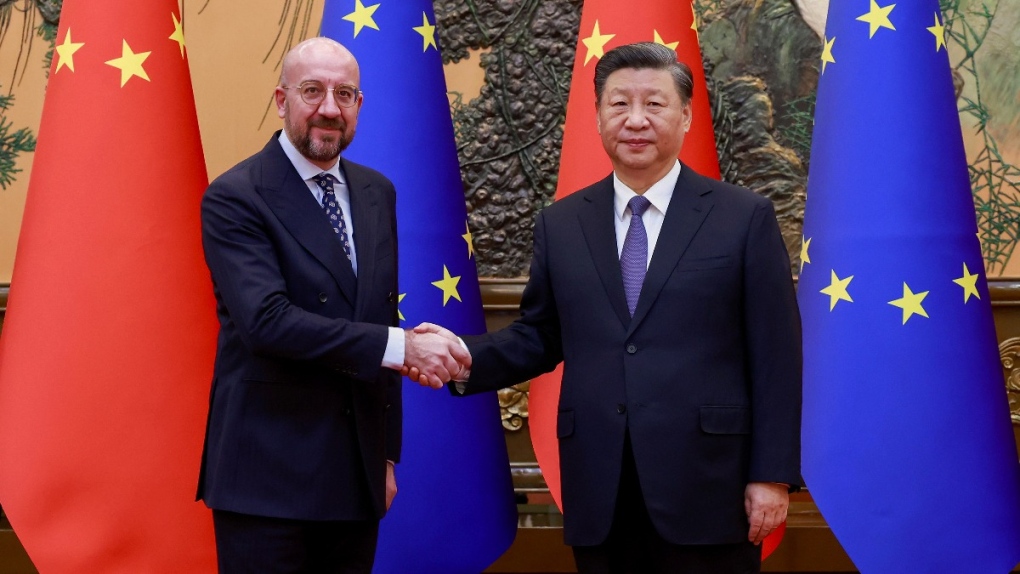 Chinese President Xi Jinping, right, shakes hands with European Council President Charles Michel before their meeting at the Great Hall of the People in Beijing, on Dec. 1, 2022. (Ding Lin / Xinhua via AP)
BEIJING -

Xi was quoted as saying that "solving the Ukrainian crisis through political means is in the best interest of Europe and the common interest of all countries in Eurasia."

"Under current conditions, we must avoid escalation and expansion of the crisis and work for peace," Xi said.

China has made such statements repeatedly in the past, while refusing to condemn Russia's invasion and criticizing sanctions against Moscow.

Weeks before the invasion, Xi and Russian leader Vladimir Putin affirmed their "no limits" relationship, and Beijing has stepped up oil purchases from Russia while their air forces held joint drills this week.

A spokesperson for Michel said he underlined that the EU is counting on China, as a permanent member of the UN Security Council, to call on Russia to respect the core principles of the UN Charter and contribute to ending Russia's brutal destruction and occupation.

EU officials said Michel's one-day visit was aimed at seeking a balance between the EU's wish for more exports to China and the need to be firm with Beijing in the defence of democracy and fundamental freedoms.

In recent years as China increased its global clout, the EU has increasingly come to see the nation as a strategic rival.

Michel's visit is also an opportunity for the 27-member bloc to show a united front after German Chancellor OIaf Scholz made a solo visit to China in early November.

During that trip, Scholz urged China to exert its influence on Russia and raised human rights concerns. Michel will try to build on those discussions as the EU seeks to stand its ground against an increasingly assertive and authoritarian China.

The visit also comes amid high tensions over self-governing Taiwan, which China has threatened to invade, and follows a United Nations report that said China's human rights violations against Uyghurs and other ethnic groups in its Xinjiang region may amount to crimes against humanity.

Increasing numbers of politicians from the European Parliament and EU member nations have been visiting Taiwan, sparking anger in Beijing. Lithuania's decision to upgrade relations with Taipei prompted Beijing to freeze ties and ban trade with the Baltic nation.

At the same time, Michel is seeking to improve the EU's economic standing in the world's second largest economy, which has experienced significantly slower growth partly as a result of rigid anti-COVID-19 restrictions that also limited Michel's visit to just one day.

The EU has an annual trade deficit in goods and services with China amounting to about 230 billion euros. It specifically seeks to reduce its dependence on China for tech equipment and the raw minerals used to make items such as microchips, batteries and solar panels.