Cardinal in Vatican fraud trial: My conscience is 'tranquil' 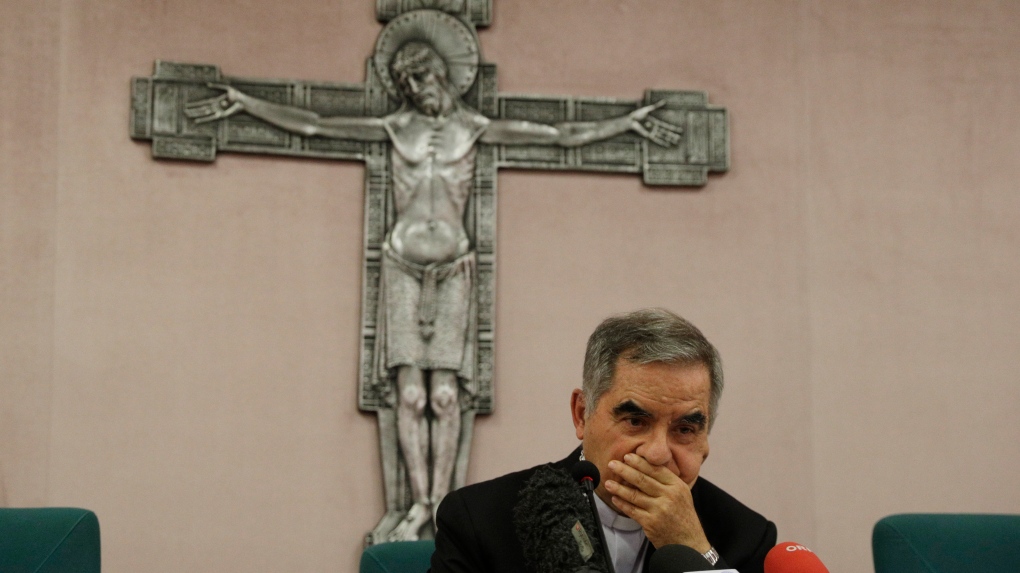 In this Friday, Sept. 25, 2020 file photo, Cardinal Angelo Becciu meets the media during press conference in Rome. Italian police searched the offices of a Sardinian charity and diocese on Wednesday, June 9, 2021 on behalf of Vatican prosecutors who are investigating a once-powerful Holy See cardinal on alleged embezzlement charges. Lawyers for Cardinal Angelo Becciu said in a statement that any and all documentation seized would only serve to “confirm the absolute correctness of the behavior” of Becciu, the charity and the diocese of Ozieri. (AP Photo/Gregorio Borgia, File)

VATICAN CITY -- A fraud and embezzlement trial over alleged mismanagement of the Holy See's investments began Tuesday in Vatican City, with a once-powerful cardinal among the 10 defendants saying he remains “obedient” to Pope Francis, who stripped his privileges to bring him before the tribunal.

”He wanted me to be on trial, and I'm coming to the trial. I'm serene. I feel tranquil in my conscience,â€³ Cardinal Angelo Becciu, one of two defendants who attended the largely procedural, seven-hour session, told reporters afterward.

Becciu, a former longtime Vatican diplomat, is charged with embezzlement and with pressing a monsignor to recant information he gave to prosecutors about the handling of disastrous real estate deal involving properties in London.

The 73-year-old prelate, who was elevated to cardinal by Francis in 2018 but later dismissed by the pope from his later post in charge of the church's saint-making office, has denied any wrongdoing.

During the first day of the trial, held in a courtroom converted from a Vatican Museums hall, defense lawyers lamented they hadn't had time to digest about 28,000 pages of documents recently released by Vatican prosecutors.

Chief Judge Giuseppe Pignatone agreed, setting the next hearing for Oct. 5. Pignatone is a former Rome chief prosecutor and earlier had spent decades investigating the Mafia in Sicily and criminal economic activity.

Not waiting for a verdict, Francis has already removed Becciu's rights as a cardinal. Becciu showed up in court wearing a plain black clergyman's suit and a large cross hanging around his neck instead of the prestigious red garb reserved for the so-called `'princes of the church.”

The defendants face prison sentences, fines or both if convicted.

Less than three months ago, it would have been impossible for a cardinal to be in the dock in the Vatican City State, which has its own justice system and even a jail. But Francis had a law changed so that Vatican-based cardinals and bishops can be prosecuted and judged by the Holy See's lay criminal tribunal as long as the pontiff signs off on it. Previously, Vatican cardinals could only be judged by their peers, a court of three fellow cardinals.

The defendants are alleged to have had various roles in actions that effectively cost the Holy See tens of millions of dollars in donations from rank-and-file Catholics. The losses came through poor investments, dealings with shady money managers and purported favors to friends and family.

Looming large in the indictment is the London deal approved by the Vatican secretariat of state. An initial 200 million euros (now nearly $240 million) was sunk into a fund operated by an Italian businessman. Half the money went into the real estate venture in the swank Chelsea neighborhood, an investment that eventually cost 350 million euros. By 2018, the original investment was losing money, and the Vatican scrambled to find an exit strategy.

Other defendants include Cecilia Marogna, who was hired by Becciu as an external security consultant. Prosecutors allege she embezzled 575,000 euros in Vatican funds that Becciu had authorized for use as ransom to free Catholic hostages abroad. Marogna has contended that charges she ran up were reimbursement of her intelligence-related expenses and other money was her compensation.