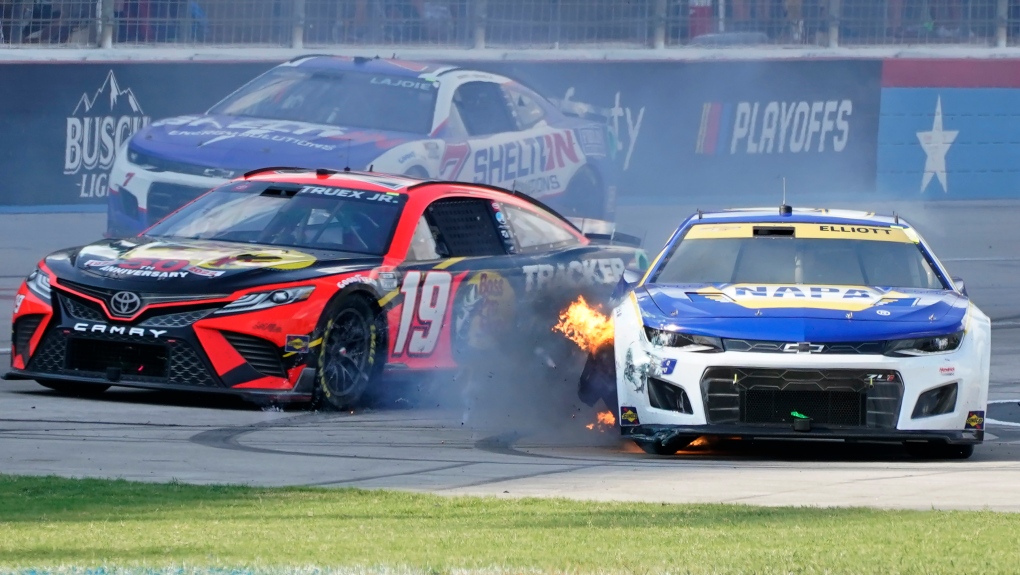 NASCAR's most popular driver said Saturday the sport has taken an unacceptable step backward in safety with its new Next Gen car, a rare public offering of opinion by Chase Elliott.

NASCAR's top drivers essentially have turned into an angry mob as they head into Sunday's playoff race at Talladega Superspeedway. Alex Bowman and Kurt Busch are both sidelined with concussions, and Cody Shane Ware will race with a broken foot. All three drivers were injured in crashes in NASCAR's new Next Gen car.

The car had a honeymoon phase when it debuted at the start of the year because it delivered on its promise to improve the racing and level the competitive playing field. And while the Next Gen faced some bugs in the first seven months, the car is now experiencing serious problems during the playoff portion of the season.

That's created a growing sense of urgency from the drivers that NASCAR must soften the rear of the cars in the interest of safety.

Bowman and Busch were both injured when the rear of their cars hit the wall. Because the Next Gen was designed to be durable, their crashes looked routine, when in reality most of the energy from the impact was absorbed by the driver. Busch is out for an 11th consecutive race:Bowman crashed on the 98th lap last Sunday at Texas, radioed his team to say it was the hardest hit of his life, appeared unwell on his in-car camera and yet continued to drive 231 laps. He was diagnosed with his concussion on Thursday.

"These types of incidents that result in injuries. ... I'm not a doctor but I've watched a lot of cars back into the wall and the guy would be fine," Elliott, who is teammates with Bowman at Hendrick Motorsport, said Saturday before qualifying at Talladega.

"No one's immune to it; it could be me next week. It could be any of my peers or fellow competitors. I just hate to see us go backwards and I'm afraid that we have," Elliott added.

Elliott last week crashed when his tire failed while leading at Texas. Although he's been voted the most popular driver by fans the last three years, the 26-year-old son of Hall of Famer Bill Elliott very rarely publicizes his opinions on controversies.

But the drivers clearly have had enough after the Next Gen was a disaster for a fourth consecutive playoff race. Denny Hamlin and Kevin Harvick have publicly called out NASCAR for not doing enough to keep the drivers safe.

NASCAR is adamant it is working tirelessly to address issues, and rules changes were made to address a sudden rash of car fires in the playoff opening race at Darlington. NASCAR could begin checking the air pressure levels on tires to determine if the recent failures occurred because teams are pushing past the Goodyear-recommended settings. But there doesn't seem to be a quick fix on softening the chassis.

Elliott said NASCAR had plenty of time to develop the car and discover these new problems. The Next Gen was announced in 2019 as scheduled to debut in 2021, but in 2020 NASCAR moved the debut to this season because of COVID-19 slowdowns.

"Heck, we had plenty of time to test this car and crash it, do all the things that we need to do to ensure that some of these things that are happening now weren't happening," Elliott said. "We had a ton of time to do that, and this car was delayed an entire calendar year on top of that. We got an extra year of time to work on it and we're still in this position.

"There's no excuse for going backward. We have too many smart people, too much technology, too many years of crashing. We should not be in the position we are in. When you come out with a new product, you should step forward, not stay the same or go backward, especially in the safety category."

BELL ON THE POLE

Christopher Bell won the pole for Sunday's race at Talladega Superspeedway, the middle race of the Round of 12 of the playoffs. The Joe Gibbs Racing driver was the most consistent playoff driver in the first round, but a crash last week in the second-round opener dropped him to 11th in the standings.

The field will be cut from 12 to eight next Sunday on The Roval at Charlotte Motor Speedway.

Bell turned a lap at 180.591 mph in his Toyota in Saturday qualifying to top reigning NASCAR champion Kyle Larson, in a Chevrolet for Hendrick Motorsports. Denny Hamlin, teammates with Bell at Gibbs, qualified third and was followed by the Stewart-Haas Racing Fords of Aric Almirola and Chase Briscoe.

Ross Chastain, winner at Talladega in the spring, qualified sixth in a Chevrolet for Trackhouse Racing. Noah Gragson was seventh and is the replacement driver at Hendrick Motorsports for Alex Bowman, who is out with a concussion.

Tyler Reddick was visibly upset after he hit a NASCAR official when he couldn't get his car stopped as she guided him on pit road following his qualifying run.

Kelly Sullivan was knocked down by Reddick's car and was treated for what appeared to be an ankle injury.

"We were coasting in and I thought I was going to be a lot further down pit road and last minute, they wanted me to turn in here," Reddick said. "I just screwed that up."

The collision seemed to damage Reddick's car, but he wasn't focused on that.

"That's not really important; I am just glad she is not seriously hurt," Reddick said. "If I wouldn't have hit her, she'd be in great health, but I'm really glad she's able to walk. That's what is important, that she's OK and she can put weight on her leg."

Ty Gibbs this week was fined $75,000 by NASCAR for what it called "retaliatory vehicle contact on pit road with crew members/officials in close proximity; second offense" at Texas Motor Speedway.

It was another high-profile incident for the 19-year-old grandson of Joe Gibbs. The Xfinity Series driver currently is filling in for Kurt Busch at 23XI Racing and is expected to be named Kyle Busch's replacement at his grandfather's team.

Gibbs earlier this year drew criticism for throwing punches at a rival driver on pit road after a race, and fans have begun to paint him as NASCAR's newest villain.

He said Saturday he's continuing to learn from each incident.

"I'm just making these mistakes, and these decisions are unacceptable to NASCAR and the whole team and everybody sees you," Gibbs said. "Only thing I can do going forward is show by my actions, not words -- words don't change, but actions are what's actually going to change people's thoughts and opinions and so that's what I've got to do -- I've got to hammer and focus."