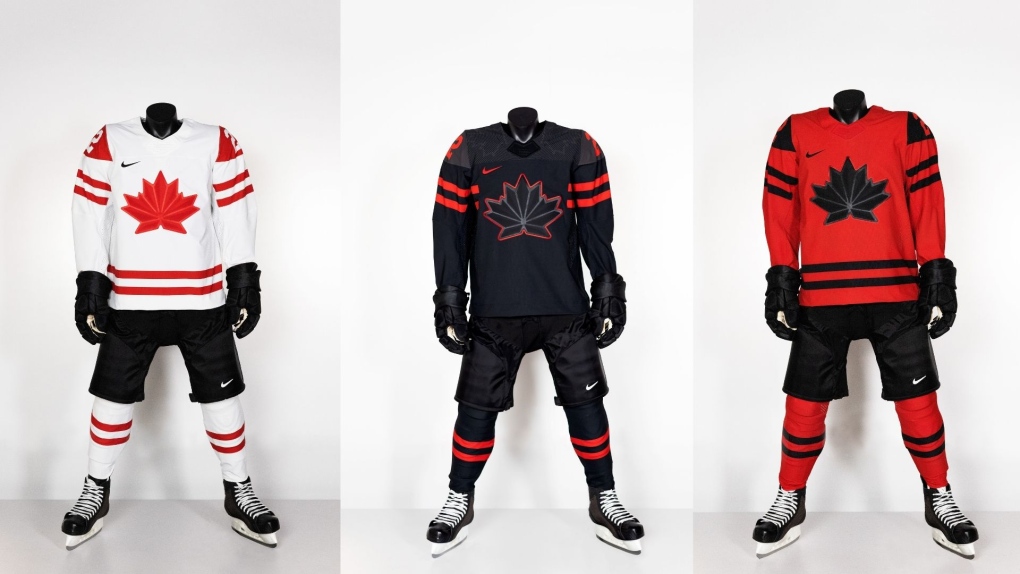 An example of the Canadian Olympic hockey team's new uniform is seen in an undated handout photo. THE CANADIAN PRESS/HO-Hockey Canada
CALGARY -

Hockey Canada has unveiled the jerseys its teams will wear next year at the Olympics and Paralympics in Beijing.

Three versions of the Nike jerseys were released Tuesday, all featuring a maple leaf as the centre crest.

The crisp white version features a red crest, red stripes on the arms and bottom, and red lettering on the back, while the red sweater uses a black maple leaf, black lettering and black stripes.

The third jersey is a black-on-black design with a black maple leaf outlined in red on a black base.

Canada has traditionally been a powerhouse in Olympic hockey, with the women's team winning silver at the Pyeongchang Games in 2018 after dropping a heartbreaking 3-2 shootout decision to the Americans in the championship game. A men's team devoid of NHL talent took bronze from South Korea.

The Beijing Olympics run from Feb. 4-20. The Paralympics are set for March 4-13.

"The red, white and black of the jerseys represent Canada's rich history as the most successful country in Olympic hockey," David Shoemaker, CEO of the Canadian Olympic Committee said in a statement.

"Canada's 22 hockey medals, including 13 gold, are a testament to the excellent work of Hockey Canada and the quality of Canada's athletes.

"I can't wait to cheer on the men's and women's teams at the Games."

This report by The Canadian Press was first published Nov. 23, 2021.

The 🍁 is ready for another iconic moment 🤩

Here are the hockey jerseys that #TeamCanada will be wearing as they compete for Olympic 🥇 at Beijing 2022 ➡️ https://t.co/Job1bxn4v2