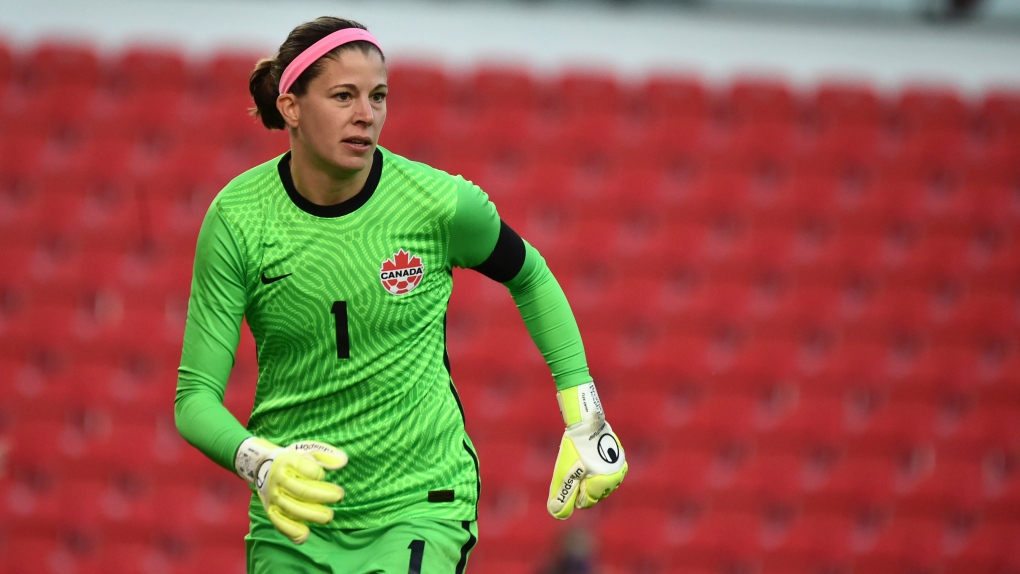 The 35-year-old from Stony Plain, Alta., who started the season with Sweden's FC Rosengard before transferring to Paris Saint-Germain in late August, was beaten out for the FIFA award by Chile's Christiane Endler (Paris Saint-Germain/Olympique Lyonnais).

Labbe says she has left PSG and will call it quits this spring after the second half of the Canadian women's so-called “Celebration Tour.”

“That will be my official sendoff with the national team,” said Labbe, who has won 85 caps for Canada, with 43 clean sheets.

Labbe said she had been thinking about her future for some time, with a decision coming in late November.

“Honestly I woke up one day and it just hit me - I just knew in my heart that it was time,” she said in an interview. “I feel so confident in that, I feel so ready for what's next.

“I really truly feel at this point that I've given everything to the game and I've invested my heart and soul into it and I just don't feel that I have anything left. And I feel so great about that. I really feel like I've left everything out there. I couldn't have asked for a better moment than to have finished my career on an Olympic gold medal and signing for one of the top clubs in the world.”

A rib injury forced Labbe out of Canada's opening game against host Japan at the Olympics. But she returned after missing one game, albeit playing in pain.

The Canadian No. 1 became an iconic figure in Tokyo - grinning in goal during pressure-packed penalty shootout wins over Brazil and Sweden.

While she still loves the game, Labbe says she no longer felt “that drive to want to go to training in order to really push herself to the maximum.”

“And for me, I've never been the type to do things half-ass.”

Plus, a spark was missing. She said the “rush of excitement” stepping on the field was fading.

She leaves the Canadian goal in good hands with Erin McLeod (119 caps), Kailen Sheridan (16) and Sabrina D'Angelo (eight) - with Anna Karpenko, Rylee Foster and Devon Kerr among those waiting in the wings.

“It's a bright, bright future for this team,” said Labbe. “I have no doubt about that. I'm super-excited to watch them all continue to grow and flourish. And I'm going to be their biggest cheerleader, their biggest support system.”

Labbe has also won praise for opening up about mental health, detailing difficult times in 2012, after the 2016 Rio Olympics and during the Tokyo Games.

In 2012, she stepped away from the national team to focus on her club career rather than stress about her place in the Canadian pecking order. That meant missing the London Olympics, where Canada won bronze.

After winning bronze at the 2016 Rio Games, the Olympic medal began to weigh her down with Labbe feeling people were more interested in it than her. In September 2017, the Washington Spirit announced Labbe was taking a medical leave for the remainder of the NWSL season.

More recently, Labbe said she could not train for part of the Tokyo Games because of “high levels of anxiety and multiple panic attacks.”

She detailed the challenges she faced in a September essay titled “Winning the Olympics isn't enough to cure mental health” to help publicize FIFPRO's “Are You Ready To Talk” - a mental health awareness program from the organization representing 65,000 pro footballers worldwide.

“I had no idea that this injury would trigger an underlying vulnerability in my mental state,” Labbe wrote. “My adrenalin was so heightened, and my neuromuscular system was so finely tuned that I struggled to come down between games, which resulted in high levels of anxiety and multiple panic attacks. It got to the point where I couldn't train between the quarters (quarterfinals) and the final because I was so overstimulated.”

Labbe said she “basically spent the 48 hours following the final lying in a dark room.”

At PSG, Labbe had been sharing goalkeeping duties with Germany Charlotte Voll and the Czech Republic's Barbora Votikova. Her last game was Dec. 16, a 6-0 win over Iceland's Breidablik in UEFA Champions League group play.

Labbe is scheduled to return to Canada on Thursday with her fiancee, former Olympian Georgia Simmerling, and their dog Rio.

“I have a piece of my heart where I want to continue to get more Alberta girls on the national team. There's been few and far between over the years.”

Home is always close to her heart.

Labbe's right arm, from shoulder to elbow, is a tattooed tribute to her native Alberta.

The ink depicts the Rocky Mountains - “my happy place” - and spruce trees. A compass pointing north shows she is from northern Alberta. A wild rose, Alberta's provincial flower, is coiled around an anchor that reminds her to be grounded and know where you're from. Below a quote, “Be You Bravely,” provides words to live by.

The word “Free” is inked on her wrist. She calls it a reminder “that when I'm at my best, I'm free and I'm not thinking, I'm just able to be me and I'm just free.”

Labbe says she will take her time choosing her next adventure.

“First and foremost, I want to enjoy these last couple of months of national team activity,” she said. “Just really take the time to reflect and be proud of what I've been able to accomplish â€¦ But I'm also really confident that opportunities will come and things will be there for me on the other side.

“But right now I just want to enjoy this moment with my friends. my family, with the national team and have a proper celebration this spring.”

Starting a family with Simmerling down the line is also on the cards, with the couple looking at a wedding in the summer of 2023.

Simmerling made history at Rio 2016 by becoming the first Canadian athlete to compete in a different sport at each of three different Olympic Games. She made her Olympic debut in alpine skiing at Vancouver 2010, competed in ski cross in Sochi in 2014 and track cycling's team pursuit at both the Rio and Tokyo Games.

Labbe played collegiate soccer at the University of Connecticut, starting her professional career in 2009 in Sweden, playing for Pitea IF and then KIF Orebro DFF before returning to North America in 2014 to join Washington.

In March 2018, she signed for the Calgary Foothills, a men's team. But league rules prevented her from playing.

Labbe joined Sweden's Linkopings FC before returning to the U.S. to join the North Carolina Courage, winning the NWSL championship in 2019.

This report by The Canadian Press was first published Jan. 19, 2022.