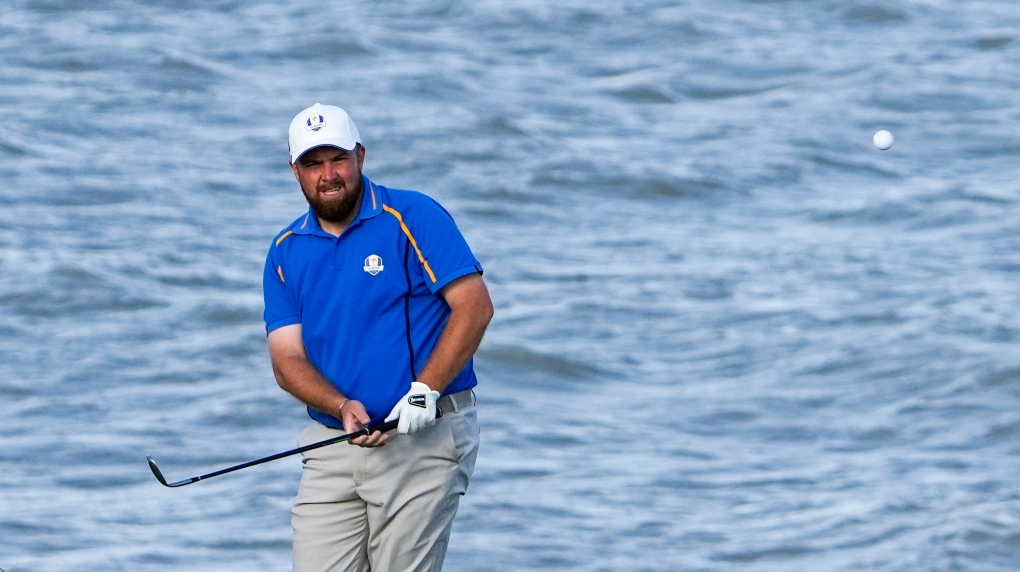 Shane Lowry tried to navigate his way down one of the hundreds of steep, slick hills that make Whistling Straits a menace for golfers with or without a club in their hands. He slid down the embankment and skittered hard onto his backside.

Nobody got hurt. That was about the best Europe could say after a dismal opening day at the Ryder Cup.

The Europeans trailed 6-2 after the first two sessions Friday, their biggest deficit since the event was expanded to include the entire continent back in 1979.

"We can come back from 6-2," Rory McIlroy said after losing two matches on the same day for the first time in his six appearances.

Not if they start the way he did Friday. After the first five holes of his morning foursomes match with The Postman -- Ian Poulter earned that nickname because, the legend goes, he always delivers -- McIlroy found himself 5 down.

It couldn't have been worse. It didn't get much better. Poulter and McIlroy fell 5 and 3 to Patrick Cantlay and Xander Schauffele -- part of a 3-1 morning thrashing that the Americans repeated in the afternoon fourball matches.

"No doubt it was a tough day," European captain Padraig Harrington said. "But there's still a lot to play for."

The only bright spot for Harrington's team came early, when Jon Rahm and Sergio Garcia -- the latest iteration of the Spanish Armada -- made more than 125 feet worth of birdie putts en route to a 3-and-1 victory in foursomes over Justin Thomas and Jordan Spieth.

"A lot of good things can still happen," Garcia promised after seeing his was the only Europe win on the board.

If Garcia and Co. are to turn things around, then he and Rahm can't be the only ones to make long putts. They'll also some help from the Americans, who looked nothing like the underachieving teams that have lost this event nine of the last 12 times despite almost always having better players on paper.

They do this time, too -- all 12 U.S. players are in the top 25 -- and any thought that Europe could use its guile, grit and friendship to counteract all that talent completely vanished as the wind kicked up in the afternoon.

Tony Finau made six birdies over his first 13 holes to team up with Harris English and turn an early 1-down deficit into a 4 and 3 runaway over McIlroy and Lowry. Adding insult was Lowry's slip-and-fall on the front nine. It was the only memorable moment he produced all day.

"We probably should have given them a better match than we did," said the 2019 British Open champion.

Johnson and Schauffele both went 2-0. They took a 3-up lead after five holes in the afternoon against Paul Casey and Bernd Wiesberger and never looked back in a 2-and-1 victory.

Despite all those losses, things actually could've been worse for Europe.

Heading to the 18th tee, Rahm and Tyrell Hatton were 1 down to big-hitting Bryson DeChambeau and Scottie Scheffler. Hatton placed his drive in the fairway, then hit an approach to 7 feet, which he sunk for a birdie to salvage a half point.

That tie, along with Tommy Fleetwood and Viktor Hovland's draw against Thomas and Cantlay, gave Europe two points for the day.

"As much as we'd like to get wins on the board, we couldn't afford to lose those matches," Harrington said.

Only twice before have the Europeans not scored at least three points on opening day. They trailed 5 1/2-2 1/2 both in 2008 and in 1979, the first year Europe came to the Ryder Cup as a team. They lost both times.

Still, a half-point felt like a lot on this day for a team that heard more "USA USA" chants that it sometimes does over an entire weekend.

"That was obviously huge for the team there at the end," Hatton said. "And hopefully we go into tomorrow with momentum on our side."