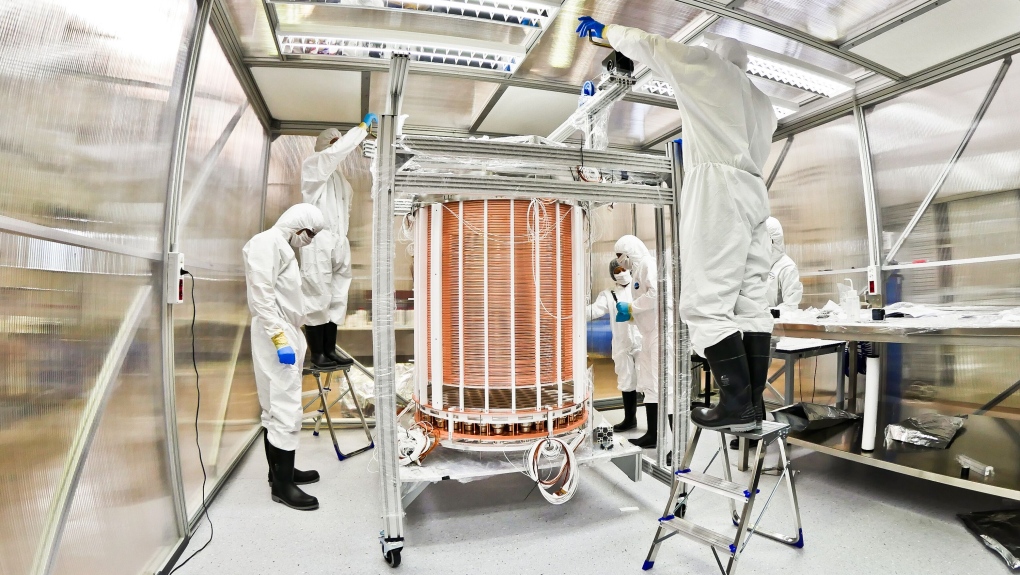 The XENON1T time projection chamber after assembly in a clean room. (Courtesy of The XENON Experiment)

TORONTO -- Dark energy, a mysterious force believed to be causing the universe to expand at an accelerated rate, may have been detected by scientists for the first time.

In a new study, published Wednesday in the journal Physical Review D, the authors suggest certain unexplained results from an experiment designed to detect dark matter could have been caused by dark energy.

"Despite both components being invisible, we know a lot more about dark matter, since its existence was suggested as early as the 1920s, while dark energy wasn’t discovered until 1998," Sunny Vagnozzi, of the University of Cambridge’s Kavli Institute for Cosmology, said in a story posted by the university. "Large-scale experiments like XENON1T have been designed to directly detect dark matter, by searching for signs of dark matter ‘hitting’ ordinary matter, but dark energy is even more elusive."

Nearly everything we can see and interact with, from bacteria to entire galaxies, is considered ordinary matter and energy, and makes up about five per cent of our universe, according to scientists. The rest is made up of dark matter (27 per cent), an invisible attractive force that holds the cosmos together, and dark energy (68 per cent), a repulsive force considered to be responsible for the accelerating expansion of the universe.

The XENON research project is a collaboration of 160 scientists from around the world who have come together to perform a series of experiments aimed at detecting dark matter particles. These experiments involve the use of ultra-pure liquid xenon, a colourless, dense, odourless noble gas found in trace amounts in Earth’s atmosphere.

Experiments are performed at the Gran Sasso National Laboratory, the largest underground laboratory in the world, located approximately 1.4 kilometres beneath the Gran Sasso mountains in central Italy, about 120 kilometres northeast of Rome.

The XENON1T experiment was the latest phase of the project. About a year ago, it detected an unexpected signal, or excess, over the expected background profile.

"These sorts of excesses are often flukes, but once in a while they can also lead to fundamental discoveries," Luca Visinelli, researcher at Frascati National Laboratories in Italy, said. "We explored a model in which this signal could be attributable to dark energy, rather than the dark matter the experiment was originally devised to detect."

The researchers created a physical model that used a type of screening mechanism known as chameleon screening to show that dark energy particles produced in the Sun’s strong magnetic fields could explain the XENON1T signal.

"It was really surprising that this excess could in principle have been caused by dark energy rather than dark matter," Vagnozzi said. "When things click together like that, it’s really special."

A discovery such as this would mean that experiments designed to detect dark matter, including those performed during the XENON project, could also be used to detect dark energy. But further research is required to confirm these findings.

"We first need to know that this wasn’t simply a fluke," Visinelli said. "If XENON1T actually saw something, you’d expect to see a similar excess again in future experiments, but this time with a much stronger signal."