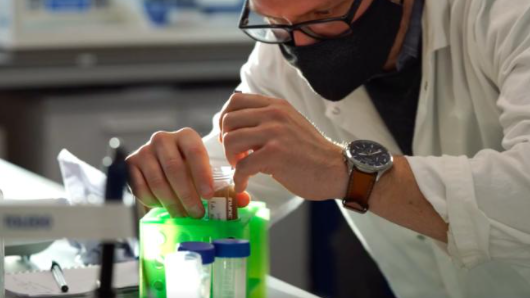 Researchers at the University of Cambridge in the U.K. have created a plant-based, sustainable, scalable material that could replace single-use plastics in many consumer products.(Xampla)
TORONTO -

Researchers at the University of Cambridge in the U.K. have created a plant-based and sustainable ‘vegan spider silk’ material that could replace single-use plastics in many common household products, according to a new study.

The research team created a polymer film that mimics the properties of spider silk, one of the strongest materials in nature, according to a release.

The “vegan spider silk” was created using plant proteins which mimic silk on a molecular level, resulting in a plastic-like film which can be made at industrial scale. Colour and water-resistant coatings can also be added to the new material.

The research findings, published in the journal Nature Communications Thursday, detail the process and benefits of the new material – including that its home compostable, which means it does not need to be processed at an industrial compostable facility like other bioplastics.

Study author Thomas Knowles, a professor in Cambridge’s Department of Chemistry, had been studying proteins for years, and was surprised when his research was applicable to sustainability efforts.

“We normally investigate how functional protein interactions allow us to stay healthy and how irregular interactions are implicated in Alzheimer's disease," Knowles said in the release. "It was a surprise to find our research could also address a big problem in sustainability: that of plastic pollution."

"Because all proteins are made of polypeptide chains, under the right conditions we can cause plant proteins to self-assemble just like spider silk," said Knowles.

The material will be developed commercially to replace microplastics and single-use plastics by a University of Cambridge affiliated company called Xampla, which has plans to introduce a range of capsules and sachets to replace the plastics used in dishwasher tablets and laundry detergent capsules.