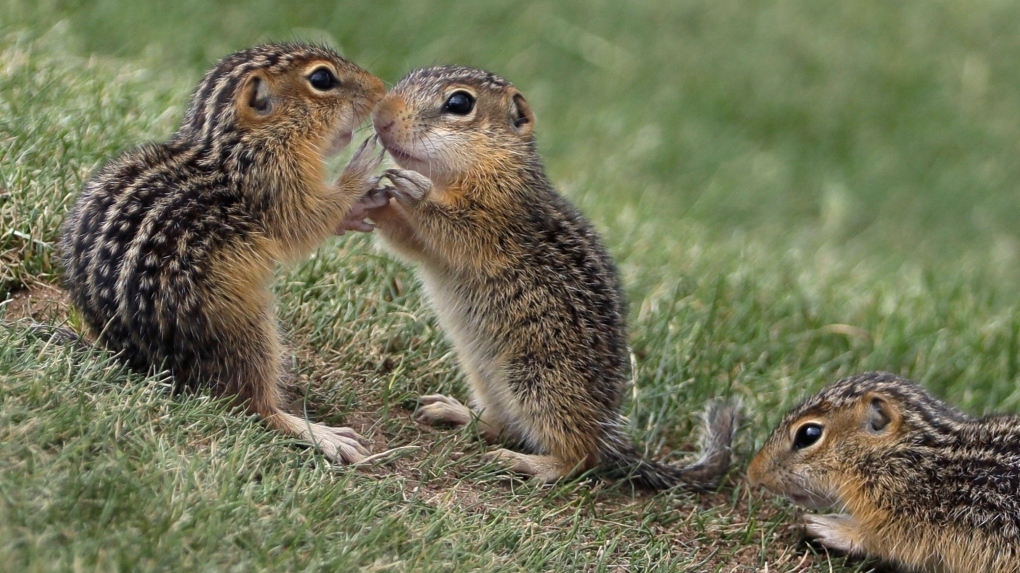 In this June 18, 2017, file photo, thirteen-lined ground squirrels congregate near the ninth hole during the fourth round of the U.S. Open golf tournament at Erin Hills in Erin, Wis. (AP Photo/David J. Phillip, File)

New research by a Université de Montréal biologist seeks to explain how squirrels conserve energy when they hibernate, and what implications that information could have on the future of space travel.

Matthew Regan's study of the thirteen-lined ground squirrel found in North America seems to confirm the theory of "urea nitrogen salvage," which suggests that some hibernating animals can pull off a "metabolic trick" in which their gut microbes recycle urea nitrogen – a waste product created in both the ground squirrel and in humans that is usually excreted in urine – and repurpose it to create new tissue proteins.

One of the problems hibernating animals encounter is losing important dietary nitrogen because of their extended fasting period, which can cause protein imbalances. In other animals this could lead to muscle loss, but Regan's research suggests this recycling of nitrogen prevents this damage in hibernators.

Regan's team injected squirrels with urea that was specifically marked to make it easier to track as the squirrels' gut microbes broke it down. They tracked this process during different seasons of the year, and found that the reincorporation of the nitrogen was actually at its highest in late winter, towards the end of the animal's hibernation period. This suggests that the salvaging process is most active just before the squirrel must come out of hibernation in spring, helping to prepare it for an active season of foraging for food and mating.

Regan suggests this same process could have applications for astronauts in space, who commonly experience some muscle loss in space flight.

Currently, astronauts exercise intensely in space in order to reduce these effects on their muscles, but that requires both room in the spacecraft and some equipment.

But if the process of urea nitrogen salvage could be replicated in astronauts, this could help prevent muscle loss in future trips into deep space when spacecraft may need to be smaller and might not be able to carry exercise equipment.

Regan's research began at the University of Wisconsin-Madison. It caught the attention of the Canadian Space Agency, which gave Regan a research grant at Université de Montréal to continue his work.

A little closer to home, Regan also suggests his research could be useful in health-care settings to help those in hospitals who are bed-ridden or elderly. He also sees possible applications for those who are malnourished, a condition which currently affects more than 805 million people globally.

“To be clear, these applications, though theoretically possible, are a long way from delivery, and a lot of additional work is needed to translate this naturally evolved mechanism safely and effectively to humans,” Regan said.