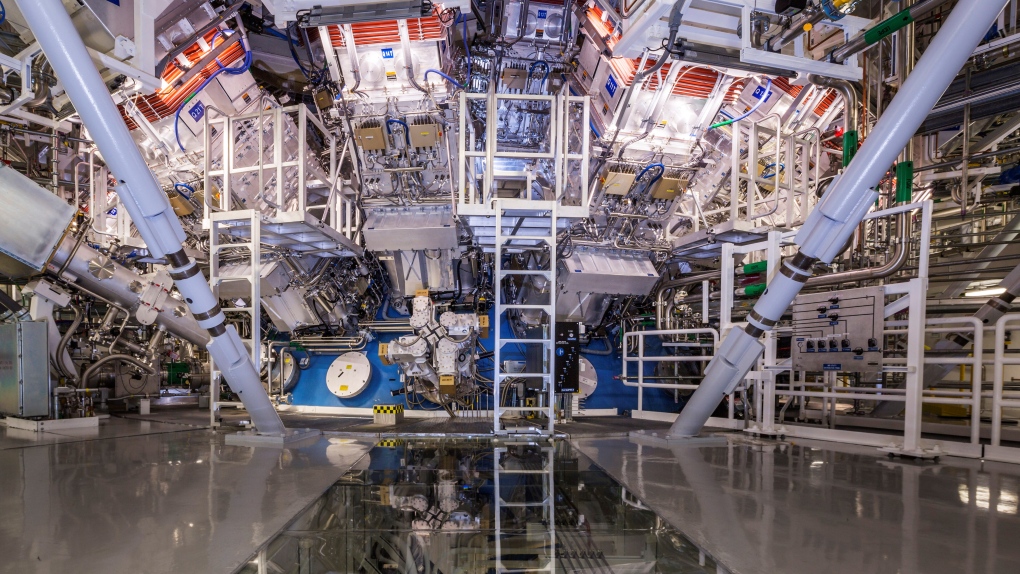 With 192 lasers and temperatures more than three times hotter than the center of the sun, scientists hit -- at least for a fraction of a second -- a key milestone on the long road toward nearly pollution-free fusion energy.

Researchers at the National Ignition Facility at the Lawrence Livermore National Lab in California were able to spark a fusion reaction that briefly sustained itself -- a major feat because fusion requires such high temperatures and pressures that it easily fizzles out.

The ultimate goal, still years away, is to generate power the way the sun generates heat, by smooshing hydrogen atoms so close to each other that they combine into helium, which releases torrents of energy.

A team of more than 100 scientists published the results of four experiments that achieved what is known as a burning plasma in Wednesday's journal Nature. With those results, along with preliminary results announced last August from follow-up experiments, scientists say they are on the threshold of an even bigger advance: ignition. That's when the fuel can continue to "burn" on its own and produce more energy than what's needed to spark the initial reaction.

Nuclear fusion presses together two types of hydrogen found in water molecules. When they fuse, "a small amount (milligrams) of fuel produces enormous amounts of energy and it's also very `clean' in that it produces no radioactive waste," said Carolyn Kuranz, a University of Michigan experimental plasma physicist who wasn't part of the research. "It's basically limitless, clean energy that can be deployed anywhere," she said.

Researchers around the world have been working on the technology for decades, trying different approaches. Thirty-five countries are collaborating on a project in Southern France called the International Thermonuclear Experimental Reactor that uses enormous magnets to control the superheated plasma. That is expected to begin operating in 2026.

Earlier experiments in the United States and United Kingdom succeeded in fusing atoms, but achieved no self-heating, said Steven Cowley, director of the Princeton Plasma Physics Laboratory, who wasn't part of this study.

But don't bank on fusion just yet.

It's already taken several years inside a lab that is straight out of Star Trek -- one of the movies used the lab as background visuals for the Enterprise's engine room -- and many failed attempts to get to this point. One adjustment that helped: Researchers made the fuel capsule about 10 per cent bigger. Now it's up to the size of a BB.

That capsule fits in a tiny gold metal can that researchers aim 192 lasers at. They heat it to about 100 million degrees, creating about 50 per cent more pressure inside the capsule than what's inside the center of the sun. These experiments created burning plasmas that lasted just a trillionth of a second, but that was enough to be considered a success, Zylstra said.

Overall, the four experiments in the Nature study -- conducted in November 2020 and February 2021 -- produced as much as 0.17 megajoules of energy. That's far more than previous attempts, but still less than one-tenth of the power used to start the process, Zylstra said. A megajoule is about enough energy to heat a gallon of water 100 degrees Fahrenheit (38 degrees Celsius).

Preliminary results from experiments done later in 2021, which are still being reviewed by other scientists, pushed energy output to 1.3 megajoules and lasted 100 trillionths of second, according to a government press release. But even that is shy of the 1.9 megajoules needed to break even.

"The major problem with fusion is that it is hard," said Princeton's Cowley. "Otherwise, it might be the perfect way to make energy -- sustainable, plentiful, safe and minimal environmental impact."