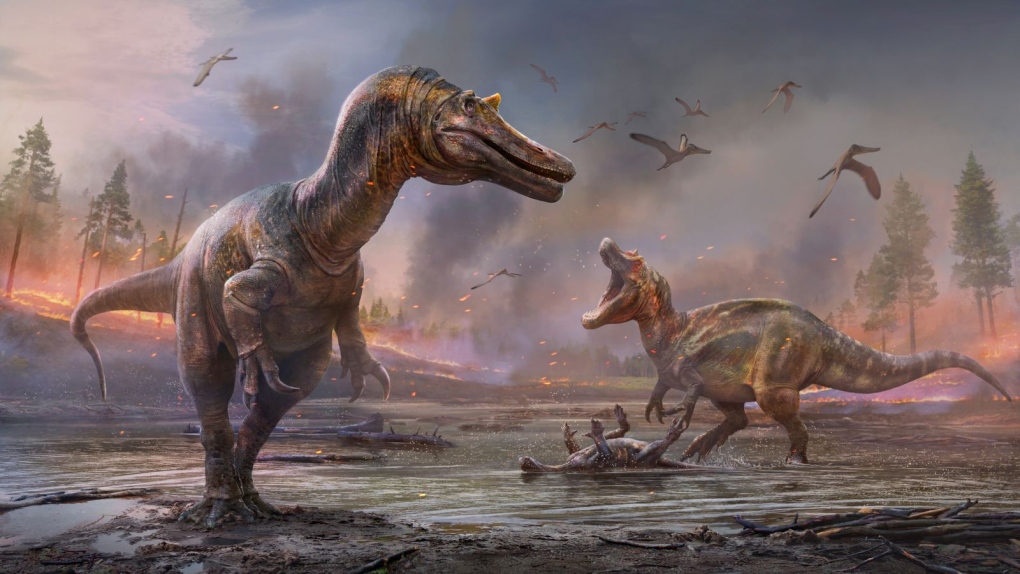 While the Isle of Wight may be better suited for tourists these days, it was once "Dinosaur Island."

Its fossil discoveries on the island off the south coast of England has led it to be known as the U.K/'s dinosaur capital.

Now, researchers have uncovered two previously unknown species of predatory dinosaurs called spinosaurids, armed with crocodile-like skulls that helped them hunt down prey in the water as well as on land.

Fossil collectors found pieces belonging to two skulls, and a team from the island's Dinosaur Isle Museum discovered tail bones on the beach, dating back to the Early Cretaceous period 125 million years ago. The fossils will soon be on display at the Dinosaur Isle Museum.

"This is the rarest and most exciting find I've made in over 30 years of fossil collecting," said fossil collector Brian Foster in a statement shared in a University of Southampton release.

"We realised after the two snouts were found that this would be something rare and unusual," said fossil collector Jeremy Lockwood in a statement shared in a University of Southampton release. "Then it just got more and more amazing as several collectors found and donated other parts of this enormous jigsaw to the museum."

A study describing the two species published Wednesday in the journal Scientific Reports.

Previously, the only known spinosaurid fossil from the U.K. belonged to the large-clawed predator Baryonyx, discovered in Surrey in 1983. The largest of the spinosaurids was Spinosaurus, discovered in North Africa in 1915 and featured in "Jurassic Park III."

"We found the skulls to differ not only from Baryonyx, but also one another, suggesting the U.K. housed a greater diversity of spinosaurids than previously thought," said Chris Barker, lead study author and PhD student at the University of Southampton, in a statement.

The discovery of the two new spinosaurids on the Isle of Wight paints a more diverse picture of the predators roaming the U.K. during the Early Cretaceous.

"We've known for a couple of decades now that Baryonyx-like dinosaurs awaited discovery on the Isle of Wight, but finding the remains of two such animals in close succession was a huge surprise" said Darren Naish, study coauthor and expert in British theropod dinosaurs, in a statement.

The first of the two spinosaurids was named Ceratosuchops inferodios, which means "horned crocodile-faced hell heron." In life, the dinosaur sported horns and bumps across its brow region. The spinosaurid also likely hunted in a way similar to herons, which can catch prey in the water as well as on land.

The second spinosaurid is Riparovenator milnerae, or "Milner's riverbank hunter." The name is a nod to British paleontologist Angela Milner, who died in August. Milner studied the dinosaurid Baryonyx and named it as well.

Both predators likely reached about 29.5 feet (9 metres) in length and had skulls measuring 3.2 feet (1 metre) long. Spinosaurid fossils have been uncovered around the world, but they may have evolved in Europe before migrating to other areas.

"It might sound odd to have two similar and closely related carnivores in an ecosystem, but this is actually very common for both dinosaurs and numerous living ecosystems," said David Hone, study coauthor and senior lecturer and director of biological sciences programs at Queen Mary University in London, in a statement.

About 125 million years ago, the Isle of Wight had a balmy climate more similar to the Mediterranean. Evidence of forest fires can be traced by the remnants of burnt wood, which are visible in the island's cliffs today. It was the perfect environment for spinosaurids and other dinosaurs as well fish, sharks and crocodiles.

"They seem to be heron-like in their habits so they would be wading in shallow water and taking fish and other swimming things like small turtles and young crocodiles and doing the same on land going after baby dinosaurs and mammals," Hone said. "They would have been able to strike down hard and fast, just as herons do, so it would be a quick snap down on something relatively small."