April's 'Black Moon' will cause a partial solar eclipse 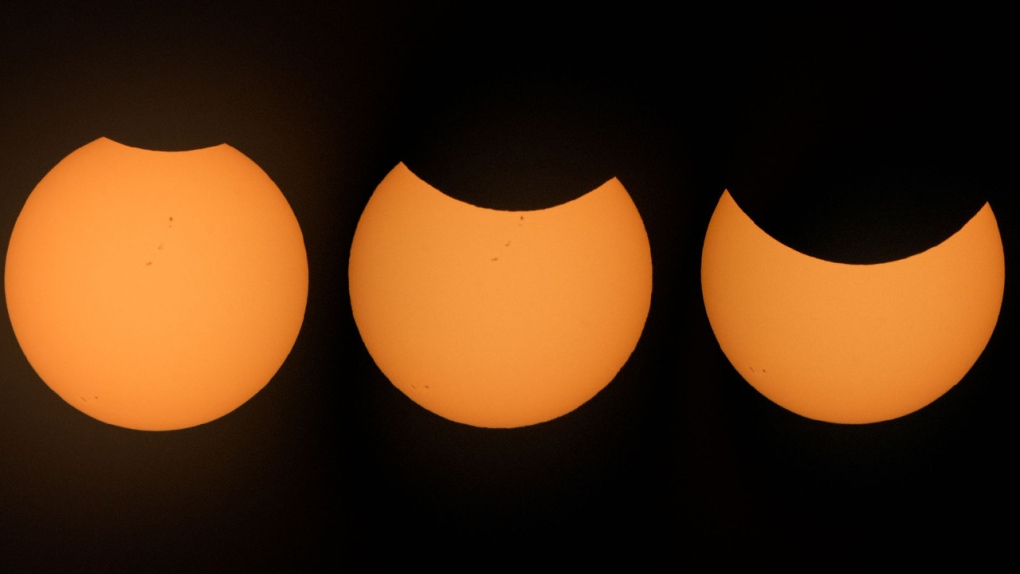 The Sun appears partially eclipsed in this series of photos taken from NASA’s Johnson Space Center in Houston on August 21, 2017. Credit: NASA/Noah Moran

A select few will see something unusual in the sky at the end of the month, according to NASA — there will be a partial eclipse of the sun, visible only in a few regions of the Earth.

A solar eclipse occurs when the moon’s orbit lines up with the sun during the daytime so that it partially or fully blocks the sun’s light for a brief window of time. During a full eclipse, the moon blocks the sun completely, while in a partial eclipse when they are not perfectly aligned, the moon’s body blocks only part of the sun, giving it a crescent shape.

On April 30, those who live in parts of southern South America and the south Pacific and Southern Oceans will have a chance to spot a partial eclipse just before sunset, NASA stated in a blog post.

If you happen to live at the edge of Antarctica, you also have a chance to spot the eclipse, but we’re sadly out of luck in Canada.

The eclipse is set to occur during the new moon. As it is the second new moon of the month of April, it’s given the unofficial moniker of a “Black Moon,” according to The Old Farmer’s Almanac.

Those who are able to view the eclipse should remember that it can damage your eyes to look directly at the sun during a solar eclipse, even though some or most of the light is being blocked. According to NASA, you can wear solar viewing or eclipse glasses to view the sun, or create a pinhole projector to projector the light onto a surface and look at the changed shape of the sun that way.

According to NASA, the next notable solar eclipse is next year, in October. Although the Moon will pass fully in front of the sun, it will be during the time of the month when the moon is farthest away from the Earth, making it an annular solar eclipse. This is when the sun appears as a bright ring around the black circle of the moon, what some call a “ring of fire” eclipse.

Several people have been shot, two suspects have been arrested and police are searching for a possible third suspect after an attempted bank robbery in Saanich, B.C.

John Horgan is expected to announce Tuesday afternoon that he will step down as premier of British Columbia, sources tell CTV News.