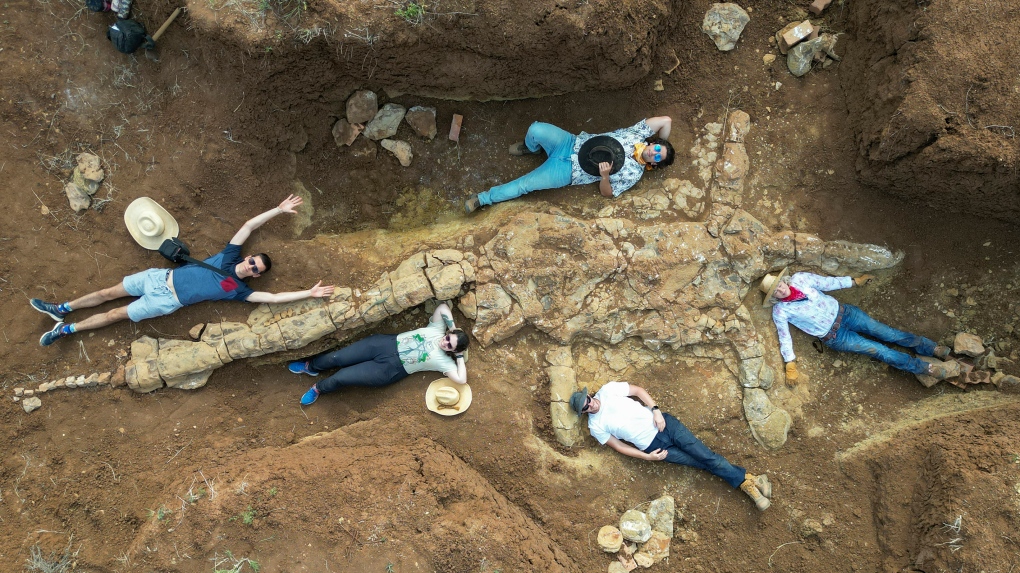 This is the first time the skull, neck and body of a plesiosaur have been found in one piece in Australia. (CNN/Queensland Museum)

The discovery of a giant 100 million-year-old marine reptile's skeleton in Australia has been hailed by researchers as a breakthrough that may provide vital clues about prehistoric life.

The remains of the 6-meter (19 feet) tall juvenile long-necked plesiosaur, also known as an elasmosaur, were found by a trio of amateur fossil hunters on a cattle station in the western Queensland outback in August.

Espen Knutsen, senior curator of palaeontology at the Queensland Museum, likened the discovery to that of the Rosetta Stone -- the Ancient Egyptian block of granite rediscovered in 1799 that helped experts to decode hieroglyphics.

"We have never found a body and a head together and this could hold the key to future research in this field," Knutsen said in a statement Wednesday that confirmed the discovery, adding it could give paleontologists greater insight into the origins, evolution and ecology of the cretaceous period in the region.

"Because these plesiosaurs were two-thirds neck, often the head would be separated from the body after death, which makes it very hard to find a fossil preserving both together," he said.

The discovery was made by amateur paleontologists known as the "Rock Chicks" -- Cassandra Prince, her sister Cynthia, and fellow fossil sleuth Sally, who goes only by her first name.

Elasmosaurs, which grew to between 8 and 10 meters long, lived in the Eromanga Sea, which covered large parts of inland Australia with waters 50 meters deep about 150 million years ago.

Knutsen told CNN that when an elasmosaur died, its decomposing body would swell with gas that made it rise to the water's surface, and often the head would break off when predators scavenged the carcass -- making full-body discoveries rare.

He added that because the latest find was a young specimen it would shed light on how the body shape of elasmosaurs changed from youth to adulthood.

"We're going to look at the chemistry of its teeth and that can tell us something about its ecology in terms of habitat as well, whether it was migrating throughout his life, or whether it was sort of staying in the same habitat, and also into its diet," he said.

Ancient marine reptiles like plesiosaurs and ichthyosaurs are not classified as dinosaurs even though they lived around the same time. Plesiosaurs evolved from ancestors who lived on land and therefore didn't have gills and had to surface occasionally for air. It remains unknown how long they could stay underwater.

It's the latest big discovery about prehistory to have been made in Australia in recent years.

In June last year, scientists confirmed that the 2007 discovery of a fossilized skeleton in Queensland was the country's largest dinosaur. The dinosaur, nicknamed "Cooper," stood about two stories tall, and was as long as a basketball court.

Two months later, scientists discovered that there once was a species of flying "dragon" that soared over Australia 105 million years ago. The pterosaur was described by researchers as a "fearsome beast" that snacked on juvenile dinosaurs.