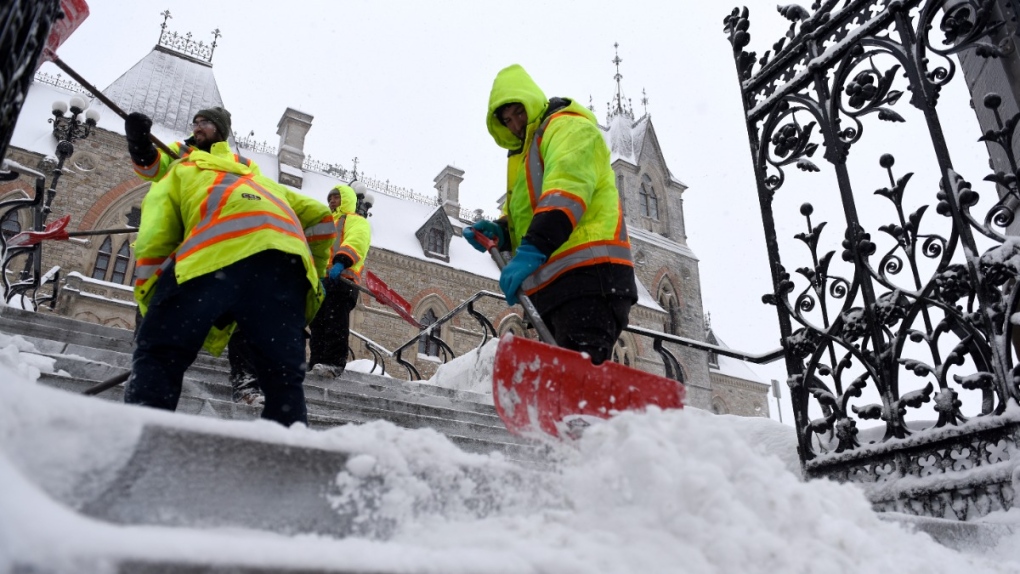 Crews clear snow from the steps in front of West Block on Parliament Hill in Ottawa during a winter storm on Jan. 17, 2022. (Justin Tang / THE CANADIAN PRESS)
OTTAWA -

Prime Minister Justin Trudeau is giving no indications of plans to rein in government spending after a critical report by the parliamentary budget officer questioned the Liberals' case to spend tens of billions in planned stimulus.

The Liberals had promised up to $100 billion in economic stimulus, subject to a series of spending guardrails to determine whether the economy had recovered enough from the COVID-19 pandemic.

Budget officer Yves Giroux's report released Wednesday morning said those benchmarks, largely tied to the labour market, appear to have been met. He said that suggests any stimulus should be wound down before the fiscal year ends in March.

Giroux added that the rationale for the planned stimulus of up to $100 billion no longer exists, unless the government has changed the policy yardsticks.

Speaking at a late-morning news conference, Trudeau pivoted away from questions about the spending guardrails, and pointed instead to the Liberals' plan to keep the debt as a percentage of the economy, known as the debt-to-GDP ratio, on a steady decline.

"We're going to continue to make sure that we are keeping Canada's balanced books healthy, while at the same time being there to support Canadians," Trudeau said.

The labour market ended 2021 having surged past pre-pandemic levels, while other economic indicators suggest the economy may be hitting capacity. Too much stimulus could add strains by juicing consumer spending for in-demand goods, many of which are in short supply because of global supply-chain problems.

The economy is past the stage where stimulus is needed, and may be counterproductive, said Rebekah Young, Scotiabank's director of fiscal and provincial economics.

Young expected the government to start signalling its budget intentions alongside a shift in tone to investing in measures to ease capacity constraints helping to drive up inflation rates.

"But these are medium-term at best," she said. "So the onus is squarely on the Bank of Canada to tackle this one. Perhaps the best-case scenario is that the Finance ministry at least sits on the sidelines for now."

Conservative finance critic Pierre Poilievre told reporters Wednesday that he wanted to see the Liberals roll back spending and not forge ahead with stimulus seen in countries like the United States.

"Just because other governments are ruining their money and driving up the cost of living for their people doesn't mean that we have to do the same," he said.

Statistics Canada reported Wednesday the annual rate of inflation in December hit a 30-year high amid warnings from economists that rates could still yet climb.

Robert Asselin, senior vice-president of policy with the Business Council of Canada, said inflation readings are a warning for the government against pursuing aggressive, short-term spending plans.

"The challenge that lies ahead is to not let policy errors harm the impressive recovery we have seen over the last few months," said Asselin, Trudeau's former budget adviser.

Billions in new tax revenues and higher oil prices have elbowed more spending room in federal books, which the PBO estimated could finance $57.8 billion in new measures over the next five years.

Giroux's office estimated that remaining spending related to the Liberals' campaign platform would amount to $48.5 billion over the same stretch.

Since the start of the pandemic, Giroux's office estimated the government has spent or planned to spend $541.9 billion in new measures, about one-third of which, or $176.6 billion, is not related to COVID-19.

Scrutinizing that spending was made more difficult in Giroux's mind by the late release of the government's audited financial statements for the preceding fiscal year. The government held on to the documents for two weeks after their cabinet sign-off, even as MPs debated extra spending measures, Giroux said.

He recommended Parliament rewrite transparency laws to require the financial statements be made public no later than the end of September each year to avoid a repeat.

This report by The Canadian Press was first published Jan. 19, 2022

Ukrainian President Volodymyr Zelenskyy accused Russia of waging "total war," seeking to inflict as much death and destruction as possible as in three months of conflict, as fighting raged Tuesday in the eastern Donbas region.

Trudeau faces chants, pounding drums as he walks through crowd at Kamloops memorial

The prime minister made comments following a memorial gathering in Kamloops to mark one year since the Tk'emlups te Secwepemc Nation announced the remains of up to 215 children were detected at a former school site.

Conservative party ends its investigation into complaint about a racist email

The Conservative Party of Canada says its ended its investigation into a racist email sent to leadership contender Patrick Brown's campaign team after the party member purportedly behind it resigned their membership.