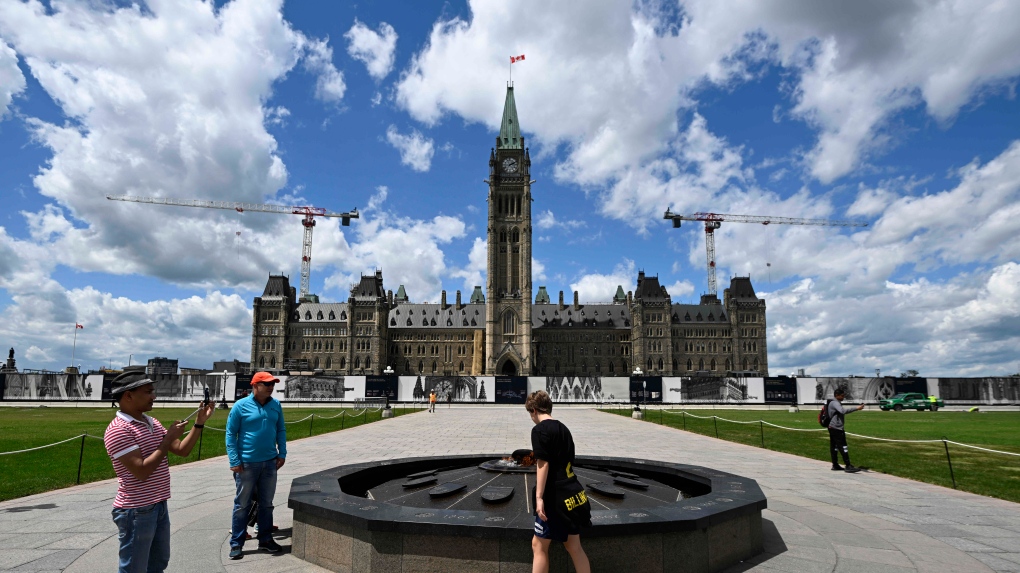 Visitors to Parliament Hill take in the Centennial Flame in front of Centre Block’s Peace Tower, in Ottawa, on Friday, June 17, 2022. THE CANADIAN PRESS/Justin Tang

Parliament's webpage and other services are back online, after an "internet service" outage on Tuesday night brought proceedings in the House of Commons and committees to a halt.

According to House of Commons Speaker Anthony Rota's office, the outage "had an impact on all services that require internet connectivity."

After some late-night troubleshooting, service was restored.

"Systems were tested last night to ensure readiness for this morning," said Heather Bradley, a spokesperson for the Speaker's office, who confirmed the issue was not security-related in an email to CTV News.

The issue was first raised during the House's evening proceedings at around 7 p.m., noting some MPs participating via Zoom couldn’t take part. The Commons was suspended soon after and ultimately adjourned at around 9 p.m. when it was established the problem was widespread.

The committee reviewing the government's use of the Emergencies Act was cut short as a result of the outage. The Senate chamber also adjourned for the night— before the problem was raised in the House— after experiencing what Senate Speaker George Furey called “system-wide” technical issues.

The "connectivity issue" also had knock-on effects for the government's legislative agenda, which is winding down ahead of Thursday's scheduled adjournment of the House for the summer.

Now, other items, including the planned fast-tracking of Bill C-28 related to "extreme intoxication," were put on Wednesday's agenda -- in addition to hours of debate focused on the Liberal's plan to continue the hybrid sitting model for another year.

In raising the issue in the House on Tuesday evening, some MPs pointed out the precariousness of relying on online tools to facilitate participation in Parliament.

"I just want to say that members of the House should remember this before they vote tomorrow or the day after on the motion to use the hybrid format for the business of Parliament for another year. It does not work all the time," said Bloc Quebecois MP Yves Perron in the chamber.

Asked by reporters on his way into a Wednesday morning caucus meeting on Parliament Hill whether what happened on Tuesday night has any impact on the government's plans to reinstate the hybrid sitting model until June 2023, Government House Leader Mark Holland said no.

“Absolutely not. Look, for two years, the Parliament has had the opportunity to have hybrid provisions. There was [an] outage, so 99.99 per cent of the time, the system has worked, and worked exceptionally well. Like any service, any technology, on rare occasions, there will be outages. We adapt,” he said.

"This outage had an impact on all services that require internet connectivity such as parliamentary web sites, Parlvu, remote access to the parliamentary proceedings, navigating the internet, etc..."