Documents give glimpse of Finance Department's outlook, warnings on inflation 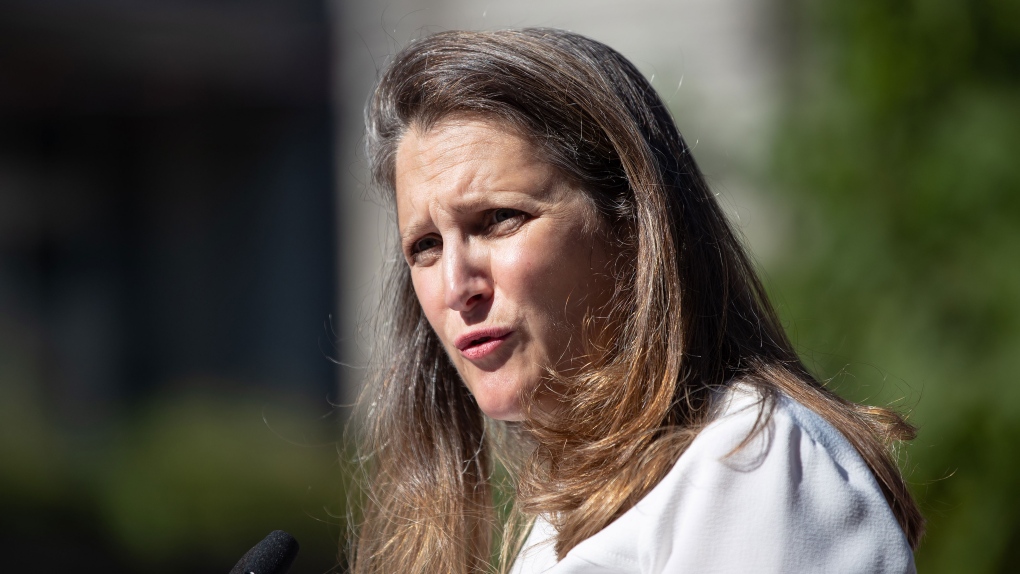 Newly released documents show the Finance Department last year warned that the pace of price increases could gain speed, even as the Liberal government and central bank maintained that inflationary pressures were temporary.

In a briefing note to Finance Minister Chrystia Freeland from the spring, officials outlined "the case for runaway inflation" as part of a larger review of consumer prices.

of the COVID-19 pandemic, the briefing note says inflation readings could go up or there were "plausible upside risks to the inflation outlook over the medium-term."

The note was written after Statistics Canada reported the annual rate of inflation hit 3.6 per cent in May 2021. The rate has risen even higher since.

The document is one of many on inflation that the Finance Department created last year, and obtained by The Canadian Press under the Access to Information Act.

In a June presentation, Finance officials noted that inflation readings would remain elevated in 2021, relying on forecasters who figured supply chain issues inflating prices would dissipate to prevent runaway inflation.

A Bank of Canada survey released Monday noted that inflation was the biggest economic concern among consumers, who also expect inflation to remain near five per cent for the year.

The inflation rate for 2021 is likely to be double what the Finance Department relied on in last year's first quarter survey of forecasters, said Stephen Tapp, chief economist with the Canadian Chamber of Commerce.

"That's probably one of the biggest misses you're going to have on record," Tapp said. "This has been the biggest positive shock to inflation that I can remember by far in my forecasting career. So it's huge."

Inflation rates are also now above where they would have been if the consumer price index had stayed on two-per-cent trajectory, meaning prices have now gone beyond just making up for the drops seen in 2020, said University of Calgary economist Trevor Tombe.

Wages haven't kept up at the same pace, creating a particular crunch for low-income households who can't as easily handle jumps in prices for things like gasoline and food, said Tu Nguyen, an economist with accounting firm RSM Canada.

Supply chain disruptions have been a key reason for rising prices.

In a question period note from June, the department suggested Freeland answer questions about inflation by saying that the government's budget would "help rebuild and boost supply capacity, increasing the space for the economy to grow without the risk of high inflation."

The start of 2022 has seen a backlog of ships unable to unload cargo -- supply logistics company Flexport counted more than 120 vessels waiting to dock at the busy ports of Los Angeles and Long Beach. Freight booking company Freightos also said shipping container costs remain eight to nine times above pre-pandemic levels, even with a recent decline.

Conservative finance critic Pierre Poilievre said Tuesday that the finance minister and government have done nothing to help counter inflation, and plenty to worsen it. He said he plans to ask Freeland about the department's views on inflation when the minister testifies at a Commons finance committee study on inflation.

"Instead of heeding the warnings of her own department, she has poured more inflationary fuel on the fire in the form of higher spending, deficits and taxes," Poilievre said.

The concern that Finance officials flagged in the spring was whether temporary issues affecting inflation, such as supply-chain issues, "will last long enough to be perceived to be permanent."

It's why the department underlined the need to monitor expectations lest they create a cycle of price increases, as companies pass on higher costs to consumers, that then puts pressure on wages to keep up.

Consumers and businesses in the Bank of Canada survey, conducted before the latest wave of COVID-19, expected high inflation over this year and next.

"That will be very important to keep an eye on this year: if people start to behave in a way that expects higher inflation," Tombe said. "If they do, then that may be a force that creates the very thing that they were worried about."