'The Rock,' the largest white diamond ever auctioned, sells for US$21.9 million 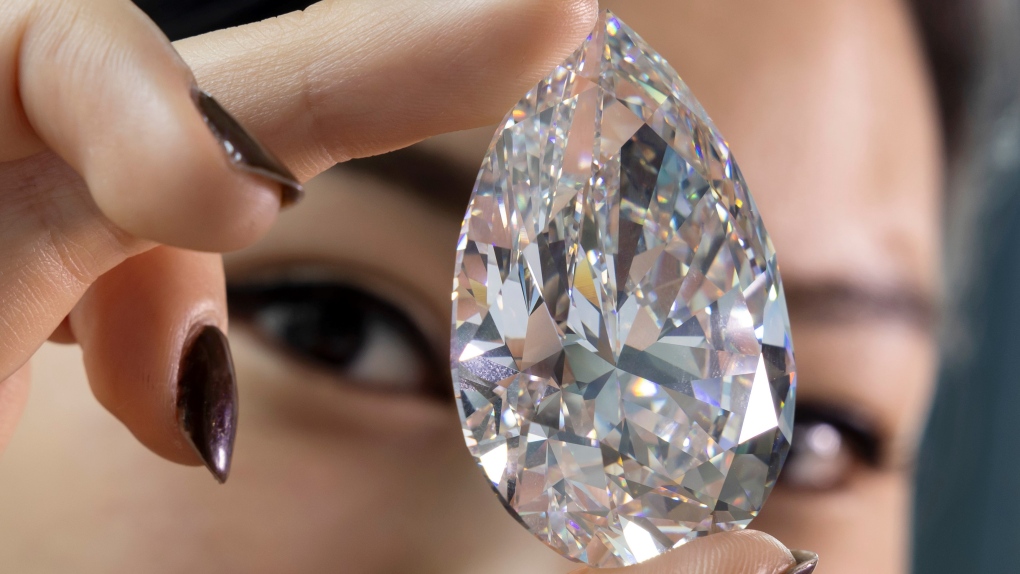 A Christie's employee holds "The Rock" a white diamond of 228,31 carats, which is the largest white diamond ever seen throughout auction market history, in Geneva, Switzerland, Friday, May 6, 2022. (Salvatore Di Nolfi / Keystone via AP)

The 228.31-carat, pear-shaped gemstone -- dubbed "The Rock" -- originated from South Africa, where some of the largest diamonds in the world have been found, including the pear-shaped "Star of Africa" and rose cushion cut "Golden Jubilee."

"The Rock" is about the size of a golf ball and was previously worn as a lavish Cartier necklace by its former owner. Along with the pear-shaped stone, the new owner will also receive a round diamond and platinum pendant mounting from the French luxury brand.

Ahead of the sale, the head of Christie's jewelry department in Geneva, Max Fawcett, explained why "The Rock" is a particularly unique stone.

"Often with these largest stones, they sacrifice some of the shape in order to keep the weight," he told Reuters. "This is a perfectly symmetrical pear-shape form and... one of the rarest gems ever to be sold at auction."

Despite its grandeur, the hammer price of "The Rock" fell short of its low estimate during the quick bidding period Wednesday. The auction house had given the diamond a 30,000,000 CHF (US$30.2 million) high estimate. In 2017, an intricate emerald and diamond necklace from Swiss luxury jeweler de Grisogono, which featured a central 163.41-carat rectangular sparkler, set the record for a white diamond sale at 33,500,000 CHF (US$33.8 million).

The final lot was a diamond that is nearly as large as "The Rock" -- the 205.07-carat, yellow cushion-shaped stone named "The Red Cross Diamond." That gem sold for 14,181,250 CHF (US$14.3 million), a portion of which will be donated to the Geneva-based International Committee of the Red Cross (ICRC). First sold at Christie's over a century ago to help the British Red Cross during World War I, the diamond was estimated to sell for between US$7 million and US$10 million, according to Fawcett.

A national substance use research organization is warning about a new type of opioid that is increasingly being found in Canada's unregulated drug supply.